The Tokyo Quad summit shows the group is maturing, but the real tests are still to come writes Purnendra Jain.

The frequency of meetings of the Quadrilateral Security Dialogue — its leaders have met four times in just over one year — signals the importance the group has acquired after a false start in the mid-2000s.

Reinvigorated in 2017, the Quad consists of the world’s number one and number three economies, the US and Japan, and two major regional economic players, India and Australia. With its embrace of Indian and the Pacific Ocean states, it has the potential to overshadow many other existing regional multilateral and minilateral frameworks.

But the Quad is still a fledgling grouping, maturing as it navigates challenging geopolitical and geoeconomic circumstances, most recently in the wake of the Russian invasion of Ukraine. Its longevity and effectiveness will depend on its unity of purpose, level-headed thinking, and delivery of pledges that the four members have made. The signs so far are good, but more needs to be done to promote focus of effort and shared purpose.

The Quad leaders have committed themselves to some key objectives such as a free, open, inclusive, resilient Indo-Pacific and pledged cooperation on a wide-range of areas, including global health, infrastructure, climate, cybersecurity, critical and emerging technologies, and space, as announced in the joint statement following the 24 May Tokyo leaders’ summit.

The Tokyo statement is substantially longer than the one issued at the Washington summit. It outlines achievements since the last meeting, such as progress on vaccine distribution and the beginning of a Quad fellowship scheme aimed at training STEM researchers from the four Quad countries. In addition, a new initiative, the Indo-Pacific Partnership for Maritime Domain Awareness (IMPDA), was integrated into the joint statement, designed to combat illegal fishing and partner with regional players to respond to humanitarian and natural disasters. 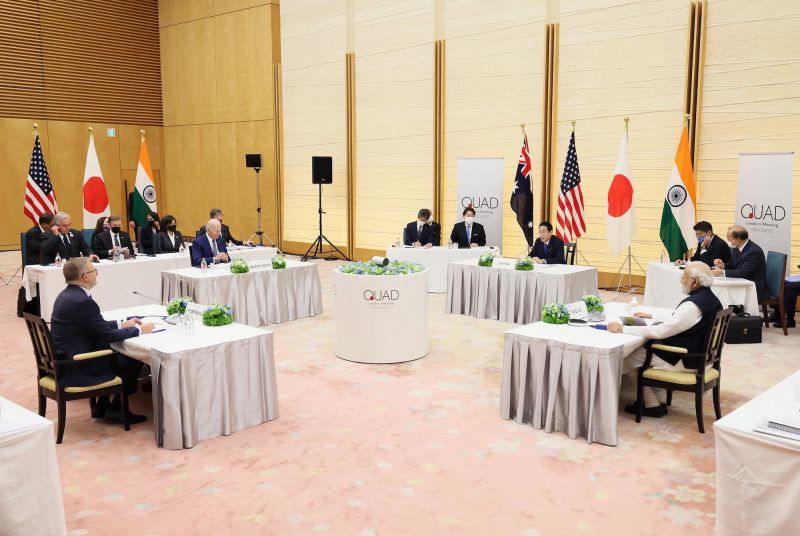 While these non-traditional security issues are uncontroversial, the Quad’s resurrection in 2017 and its elevation to the leaders’ level came in rapidly changing strategic circumstances – the growing geostrategic competition between the United States and China, tensions in Japan’s relations with China, deteriorating China-Australia ties, sporadic border skirmishes and a mini China-India war in 2020 across the Himalayas. The war in Ukraine and the growing Russia-China partnership have added to the strategic complexities to worsen the matter. But neither China nor Russia is mentioned in the joint statement, underscoring differences within the Quad.

On Russia and China, Quad members significantly differ in their approaches, and no consensus seems to have been built at the Tokyo Summit, leaving individual nations to pursue their national interests. As a result, hard-core security aspects are left to each member to resolve in bilateral or other minilateral settings, such as the US-Japan-Australia format.

Against the backdrop of India’s military dependence and its long-standing, time-tested friendship with Russia, New Delhi decided to abstain from voting on UN resolutions condemning Moscow. India, of course, would not risk harming its ties with Russia, as the bulk of its military hardware and a significant part of its energy needs come from Russia. But, above all, India needs Russia for support in the United Nations Security Council (UNSC) as Russia is a permanent member with a veto. The last thing India would like to see is Russia cooperating with China in opposition to India.

These strategic compulsions create a conundrum for India to manage both camps to support India’s national and broader strategic interests. India’s position is well acknowledged after the three other Quad leaders held bilateral meetings with India before and at the Quad Summit. India’s stance on Russia is unlikely to change soon.

This divide between India and the other Quad members is unlikely to prevent cooperation on non-traditional security areas that indirectly impact complex security issues. For example, through their USD 50 billion commitment to infrastructure assistance and investment in the Indo-Pacific, the Quad might blunt China’s infrastructure financing in the region by offering better terms and conditions, so recipients don’t fall into debt traps.

Through their IMPDA initiative, the Quad nations have committed to combat illegal fishing and work with Indo-Pacific governments to make the region more stable and prosperous. This may be aimed at Beijing, as reports suggest that China is responsible for 95 per cent of the illegal fishing in the Indo-Pacific.

Despite India’s different approach to Russia and underlying tensions this poses within the Quad, Prime Minister Modi has committed India to fully cooperate with the Quad. At the first Quad summit, Modi stated that the “Quad has come of age and will remain an important pillar of stability in the Indo-Pacific region”. At the latest in Tokyo, he underlined the strength of the Quad by calling it a “force for global good”.

The next Quad summit is due to be held in Australia in 2023. The newly elected Prime Minister Anthony Albanese received a rousing welcome in Tokyo and was congratulated by each of the other Quad leaders on his electoral victory. Albanese assured his counterparts that even with a change of government, “Australia’s commitment to the Quad has not changed and will not change”.

Much will depend on how the Ukraine crisis unfolds between now and the next summit and how China behaves. The road ahead may not be smooth. The four nations will need to stand together on security and defence challenges, otherwise the Quad could be in danger of weakening and turning into an annual talkfest. Joint statements and pledges are just the beginning, but the real strength will come through action.. China’s expanding strategic footprint beyond the East China and South China Seas into the South Pacific is Australia’s immediate concern. How the Quad nations will respond to this new development remains unclear. Is Australia on its own, or is the Quad ready to offer a joint response?