Southeast Asia is a wondrous experiment in comparative politics.

Perhaps a galactic professor peers down, testing a spectrum of political systems, from the Malay Muslim monarchy of Brunei to the world’s largest Muslim democracy in Indonesia.

Intrigued by the intimate dance between democracy and authoritarianism, the professor pushes to see whether regimes can become more responsive and more repressive at the same time. A simple lesson—taught again by Malaysia—is that ballot-box revolts can change governments, but regime change is a tough task needing much time. Kleptocracy takes a lot of killing.

As seen in the distinctly different cases across Southeast Asia, powerful elites have many ways to play elections. Add in the combustibles of individual ego and ambition to produce the drama that has just remade Malaysia’s government.

Before dwelling on the disappointments, underline the achievement of that seminal election of May 2018, when Malaysia ceased to be a one-party democracy. After having won 13 elections in 61 years, Pertubuhan Kebangsaan Melayu Bersatu (United Malays National Organisation, or UNMO) and its Barisan Nasional (National Front) coalition were cast out by the people.

The 2018 revolution was morality play as Shakespearean drama, with tragedy lurking just offstage.

Surely only a great bard or a bizarre galactic professor would dare to create a character like Mahathir Mohamad, a 94-year-old who puts the noise into being a nonagenarian. The man who made and remade UMNO during his 22 years as prime minister returned to cast it from the citadel at the head of the Pakatan Harapan (PH) coalition, the ‘Alliance of Hope’.  The alliance joined Mahathir with politicians he’d previously jailed. Then Dr M brought the alliance crashing down in February.

Mahathir, the master manipulator, masterminded his own downfall. He played many Shakespearean roles: Caesar, Brutus and Cassius, and several of the ghosts. Finally, he was Falstaff.

To understand these tumultuous years, turn to Kean Wong, a fine journalist and editor who can be claimed by both Malaysia and Australia. Kean qualifies at all levels for an honoured title of Oz hackdom: an old Asia hand.

As contributing editor for the Australian National University’s web journal on Southeast Asian politics and society, New Mandala, Kean brought together a range of writers to describe the 2018 revolution. That coverage is now published in a book, Rebirth: reformasi, resistance, and hope on the road to new Malaysia.

The book poses a poignant question: ‘Was Malaysia saved from kleptocracy by the world’s oldest prime minister, and does it finally transform itself into a sustainable democracy with another longstanding putative leader? Is there a younger generation of Malaysians with the gumption to make that difference?’

The unfortunate answer arrived quickly: not yet, professor, not yet.

Editors have many nightmares. One is publishing a book overtaken by events—bringing out a tome on a revolution as the counter-revolution arrives.

Kean’s response is to do what hacks always do. When the facts change, they file anew. So the book now has updates, carried by Melbourne University’s Asialink.

The book captures the excitement of the new Malaysia. The updates describe problems confronting its birth.

In his introduction to the updates, Kean comments: ‘[O]rdinary Malaysians did the extraordinary thing in Asia of using the ballot box and voting out a government in power since 1957, only to see a return in 2020 of its modern cabal, many of its current leaders still facing the courts for grand corruption charges.’

The book carries excellent on-the-ground descriptions of that ballot-box moment. Among the gems, see Dina Zaman’s piece, published just before the 2018 election, on life in one kampong in Sabah—a village facing the push and pull of modernity and the stricter teachings of freshly minted Islamic scholars.

Greg Lopez sets the scene for the cabal comeback by arguing that the 2018 result didn’t amount to regime change. The rules of the game for Malaysia’s competitive authoritarian regime haven’t altered, he writes, because there were ‘no fundamental alterations in the institutions that constitute the regime’, nor was there ‘substantial movement to establish free and fair elections and broaden civil liberties’. 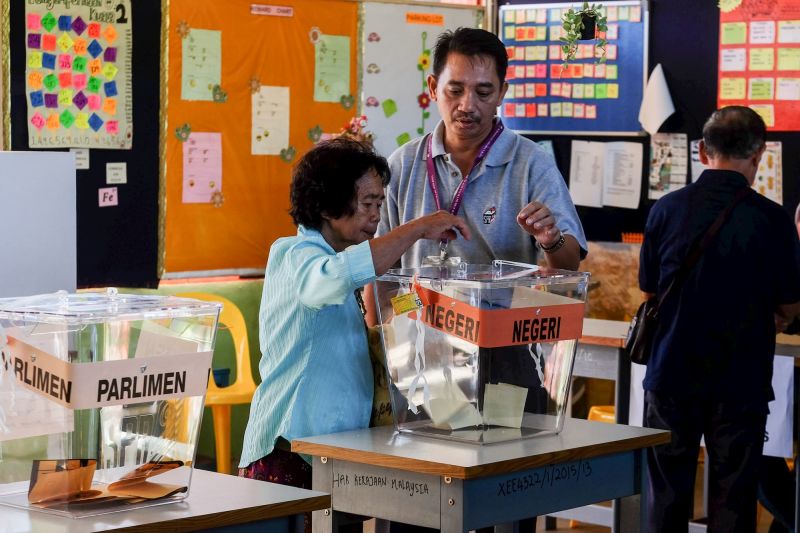 Another gem is a chapter by Clive Kessler (a grand Oz warhorse who has spent more than 50 years studying Malaysia) pondering why he got the 2018 election wrong. As he wrote before it happened: ‘Democratic transition under electoral democracy is not easily achieved in Malaysia. The bar is set very high. Inordinately high. The bottom line here is that, while it is not easy for an opposition to win an election in Malaysia, it is far harder for them, even having done so, to assume power and rule.’

The month-old Perikatan Nasional (PN) government, Kean writes, ‘is widely cast as a dubious coalition of parties mostly underpinned by a politics of race and religion, untested in and perhaps saved from parliamentary legitimacy thanks to the postponement for a few months of parliament amid the pandemic’.

Hew Wai Heng writes that the PH government was partly undone by ‘Muslim majoritarianism’, the always potent claim that ‘Islam is under the threat’ and ‘Malays are being side-lined’.

In an update essay on politics in a parlous time, Meredith Weiss notes that Malaysia’s political system sets it apart from the rest of Southeast Asia because the parties are ‘coherent, enduring, distinct, and allowed to contest’. Yet the parties are also prone to fracture under the weight of heavy egos.

The short-term costs of Mahathir’s debacle and the rise of the PN government, Weiss judges, will be ‘institutional reforms and political house-cleaning foregone, likely investments diverted, and general frustration’, while the long-term costs ‘could be citizen disillusionment and disengagement, should votes seem not to matter and other institutional checks to be ineffective’.

Galactic professors and venerable warhorses understand that winning elections in Southeast Asia is tough. Then, to actually get the power and to govern...

This article first appeared on The Strategist on April 14, 2020.