Respected former Vietnamese diplomat and writer Nguyen Quang Dy argues the conflict at sea is overlapping with the COVID-19 threat on land to produce a crisis for Hanoi that will require a fundamental strategic rethink.

On 14 April, China’s Haiyang Dizhi 8 survey group sailed into the South China Sea again. At the same time, Taiwan scrambled ships to monitor the passage of the Liaoning aircraft carrier strike group as it steered a course through the Miyako Strait near Okinawa and turned south.

China’s naval activities are part of a pattern threatening a third maritime crisis for Vietnam in the South China Sea. The first crisis started when Haiyang Dizhi 981 oil rig was parked in Vietnam’s Exclusive Economic Zone (EEZ) in May 2014. The second crisis started when Haiyang Dizhi 8, escorted by armed coast guard vessels, surveyed extensively near the Vanguard Bank in a month-long standoff with Vietnam between July and October 2019.

According to a MarineTraffic report on 23 April, the People’s Liberation Army Navy (PLAN) Liaoning aircraft carrier strike group was operating near Macclesfield bank, and Haiyang Dizhi 8 survey group was shadowing Malaysia’s West Capella drillship surveying for oil in its EEZ near the overlapping waters between Malaysia and Vietnam, South of the Spratlys, 336km due north of Borneo Island.

Last year, Haiyang Dizhi 8 and armed coast guard vessels came to bully Vietnam for nearly four months. Now, they have come back to bully Malaysia’s new government, with a similar standoff.  While this new standoff was over by 25 April when warships from both sides left the scene after a few days, China’s bully game in the South China Sea will not stop there, at least for Malaysia, Vietnam, and Indonesia.

It comes as the COVID-19 outbreak has disrupted US ship deployments. At least two US aircraft carriers have had rotations delayed, upsetting the balance of forces between the US and China in this region, in China’s favor.

On 22 April, the US Indo-Pacific Command confirmed the cruiser USS Bunker Hill, amphibious assault ship USS America, destroyer USS Barry, and Australian frigate HMAS Parramatta, were conducting an exercise in the same vicinity. But if a clash were to have taken place there, the US and Australian flotilla would have been outnumbered by PLAN vessels. The COVID-19 crisis is contributing to pre-existing erosion of US air and naval dominance in the region.  The strategic vacuum this has created has driven China to take new and bolder actions. In turn, it should provide impetus for Vietnam and ASEAN to rethink regional security architecture and the institutional basis of the Association of Southeast Asian Nations (ASEAN) to better protect the security interests of each country and the ASEAN community.

Compared with other ASEAN countries, Vietnam has a special strategic position and a tougher stance in the South China Sea. In 2020, Vietnam has a new role to play as Chairman of ASEAN and a non-permanent member of the UN Security Council. China is aware that the harder it bullies Vietnam, the closer it pushes Vietnam to the US. But China also believes if it could intimidate Vietnam, it might be able to manipulate ASEAN and keep the US out of the South China Sea as its own lake.

On 30 March, Vietnam handed a Note Verbale to the UN Secretary General to confirm its sovereignty over the Hoang Sa (Paracel) and the Truong Sa (Spratly) islands, rejecting China’s illogical arguments on the South China Sea. On 17 April, China sent its own Note the UN Secretary General in reply to the Vietnam’s Note, in which made some implied threats. This “War of Notes” is part of China’s “Three Warfare Doctrine” – applying the powers of psychology, communication and law.

According to experts on the law of the sea, Vietnam should be vigilant in case China seeks to exploit current global uncertainty to play the strategy board game of “Go”, in which it intimidates or uses force to take Vietnam’s vulnerable offshore positions near Vanguard Bank, park an oil rig or a structure there or on Whitsun reef, in a repetition of the strategy it used to take the Philippines’ Scarborough Shoal during a standoff in 2012. China may even declare an “air defense identification zone” (ADIZ) in part of the South China Sea. 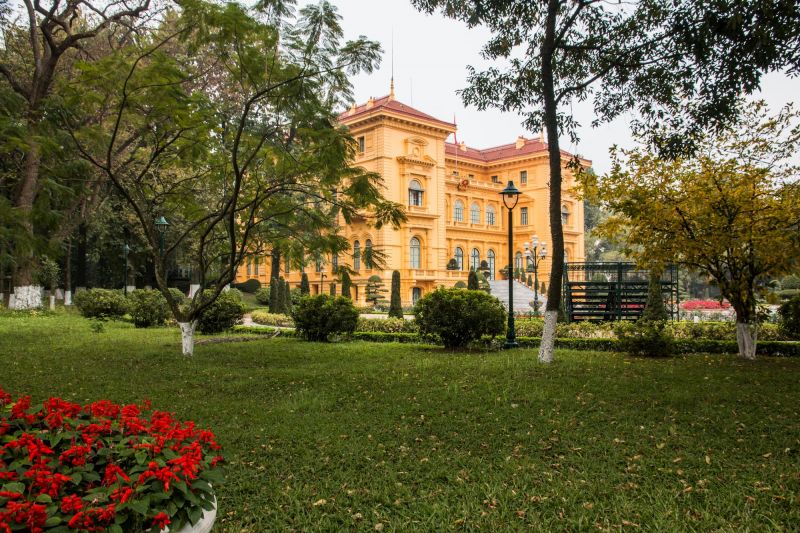 Now, to deter China’s new ambitions and fill the strategic vacuum being left by the US in the South China Sea, Southeast Asia needs new regional security architecture. This could be achieved by turning the Quad concept into a stronger “Quad Plus” grouping – the US, Japan, India, and Australia could work more closely on regional security cooperation with New Zealand, South Korea, Vietnam (and Indonesia/Malaysia). This also could provide a regional platform for Japan to play a stronger role in the South China Sea.

According to H.R. McMaster, the former US National Security Advisor, China’s ambition is fueled by insecurity, and its outward confidence covers an inner fear. In an article in The Atlantic this month, he identifies three prongs of Chinese strategy: “co-option, coercion, and concealment”, and argues “strategic narcissism” – in an apparent dig at current US policy – should be replaced by “strategic empathy” with regional partners. But the tolerance of “strategic competition” envisaged by McMaster is a far cry from the “strategic containment” that formed the basis of US Cold War strategy first articulated by the diplomat George Kennan.

The impact of COVID-19 crisis also calls for further renovation in the 53-year-old ASEAN, which was hatched in the midst of the great power competition between the communist East and capitalist West. Now that the world has to focus on fighting the new coronavirus, Vietnam has to contend with more immediate priorities than an ambitious ASEAN agenda. Following the postponement of the US-ASEAN Summit meeting scheduled on 14 March in Las Vegas due to COVID-19, Vietnam was forced to chair an ASEAN Summit meeting online on 14 April and focus on dealing with the pandemic.

But there have been suggestions among ASEAN members that Vietnam’s chairmanship of ASEAN should be extended for another year into 2021 to make up for the lost time and energy in fighting the pandemic. If this is the case, Hanoi could focus on critical issues to strengthen ASEAN as a community able to face the growing strategic challenges in a post-pandemic world. As ASEAN’s Chairman in 2020 and possibly in 2021, Vietnam should play a proactive role in its drive for institutional renovation. 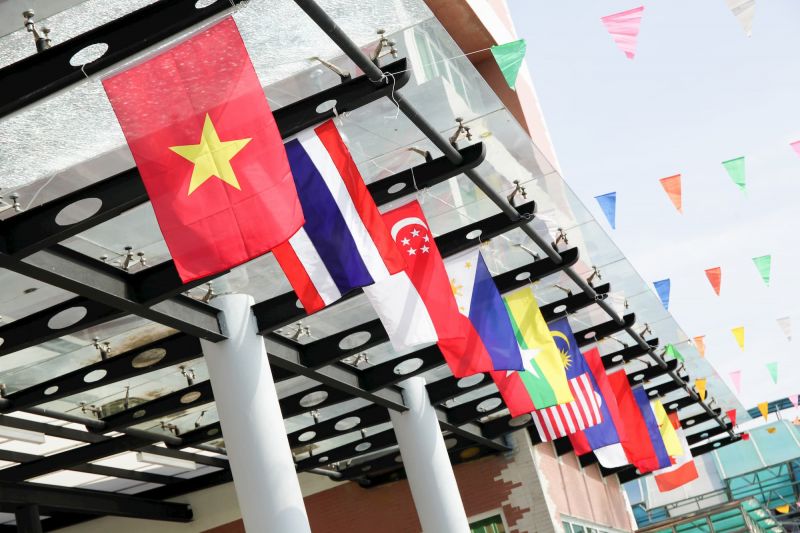 Flags of the ASEAN countries, with the Vietnamese flag in the foreground. Image credit: Twinsterphoto, Shutterstock.

For instance, the “ASEAN consensus” that requires the support of all 10 member countries for decisions to be binding, should be replaced by a less onerous a requirement. The “non-interference” principle should be qualified to allow exceptions to ensure regional security. ASEAN should also take steps to identify itself with the new Indo-Pacific vision to ensure national and regional security. The Code of Conduct (COC) in the South China Sea should be based on the UN Convention on the Law of the Sea (UNCLOS).

There is a paradox in China’s relationship with Vietnam and ASEAN. The more China puts pressure on Vietnam, the closer it pushes Vietnam to the US and the West. The harder China bullies ASEAN countries and turns the South China Sea into its own lake, the faster it drives ASEAN countries to a greater unity to deal with China, and to defend their sovereignty and vital interests in the South China Sea.

China wants to polarise ASEAN, dividing the countries like a bunch of chopsticks, so it can break them one by one. It wants to adopt only bilateral, not multilateral, negotiations to keep the US and the West out of the region. If China could control the South China Sea, ASEAN would face a “Balkanization” process in which Vietnam and ASEAN countries would be dependent on China as vassal states. Now, ASEAN countries should put aside their maritime disputes to build a new ASEAN consensus.

In this new decade, Vietnam should pursue both national and regional institutional renovation and a strategic shift that sees it breakout from its current “ideological cross roads”, caught between the US and China, in order to achieve sustainable economic growth and a greater strategic resilience. Vietnam can use the COVID-19 pandemic to bring about change, reform and development. Image credit: Marco Verch, Flickr.

As Vietnam tries to be less dependent on China on many fronts, it should defend its sovereignty and vital interests in the South China Sea as its survival space. In its legal fight, Vietnam should bring the South China Sea disputes to UN forums and the Permanent Court of Arbitration.

Now, to deal with China’s new ambitions in the South China Sea, Vietnam and ASEAN, with other partners sharing a common vision for regional security and stability, should build their deterrence. But, an effective deterrent should be based on: (1) their inner strength, (2) international cooperation, (3) their willingness to fight. Strong forces and modern weapons would mean nothing without the will to fight. If it can be said “wars begin in the minds of men”, so does deterrence.

Vietnam missed two major opportunities for reform and development in the years after national reunification. The first was the failure to achieve normalisation with the US after the Vietnam War. The second was the failure to achieve both economic and political renovation after communism collapsed in the Soviet Union and Eastern Europe. Now, as the COVID-19 pandemic brings both calamity and opportunity for change, Vietnam should not lose the “third opportunity” that this new turning point offers.

Nguyen Quang Dy is a Hanoi-based writer. He is a former official in the Vietnamese Ministry of Foreign Affairs. He graduated from the Diplomatic Academy of Vietnam 1971, undertook postgraduate studies at the Australian National University (1976-1979), and attended Harvard University as visiting scholar and Nieman Fellow (1992-1993).