The Ukraine crisis calls on Vietnam to reassess its relationship with Russia and consider further reducing dependence on its old friend and primary weapons supplier writes Nguyễn Quang Dy.

The war in Ukraine has shaken a fundamental assumption of Vietnam's defense posture – that Russia would remain a reliable supplier of key weapons systems to help deter Chinese aggression.

Russia’s invasion of Ukraine puts Vietnam in an awkward position politically and diplomatically, caught between trying to avoid condemnation of Russia and appeasing popular sentiment in Vietnam in support of Ukraine.

Vietnam abstained twice on UN votes critical of Russia’s actions before finally voting against a resolution in early April that suspended Russia from the UN Human Rights Council. Russia remains Vietnam’s primary arms supplier and a key strategic partner in Hanoi’s attempts to hedge against the China threat in the region.

There are several factors that tie Vietnam to Russia and put Hanoi in a bind over its handling of the Russian invasion. First, Russia has historically been a valued strategic supporter of Vietnam. Second, it accounts for the lion’s share of Vietnam’s arms imports. Third, Russia is a key partner in Vietnam’s oil projects in the South China Sea. Vietnam cannot risk its own military preparedness by publicly condemning Russia.

In the immediate future, Hanoi is expected to maintain its “Four No’s” policy under which it eschews military alliances, siding with one country against another, hosting foreign military bases on Vietnamese soil, and the use of force or threat of the use of force in international relations. This policy extends to the South China Sea – not yet critical enough to warrant a break with this historic strategic formulation.

But the Ukraine crisis does present a good opportunity for Vietnam to reassess its relationship with Russia, manage potential risks, and try to diversify its sources of arms to reduce excessive dependence on Russian supplies. Among Russian arms buyers, Vietnam ranks number five in the world, and number one in Southeast Asia. The pressure for Vietnam to diversify supplies has been building for a while, only to be hastened by the war in Ukraine.

First, action could be taken against Vietnam under the US Countering America’s Adversaries Through Sanctions Act (CAATSA), which potentially imposes financial penalties on Russian arms clients. Second, the Ukraine war has driven Russia closer to China. Third, many spare parts for Russian arms, like the engines of the Gepard-class frigates (ironically, manufactured in Ukraine) are no longer available. 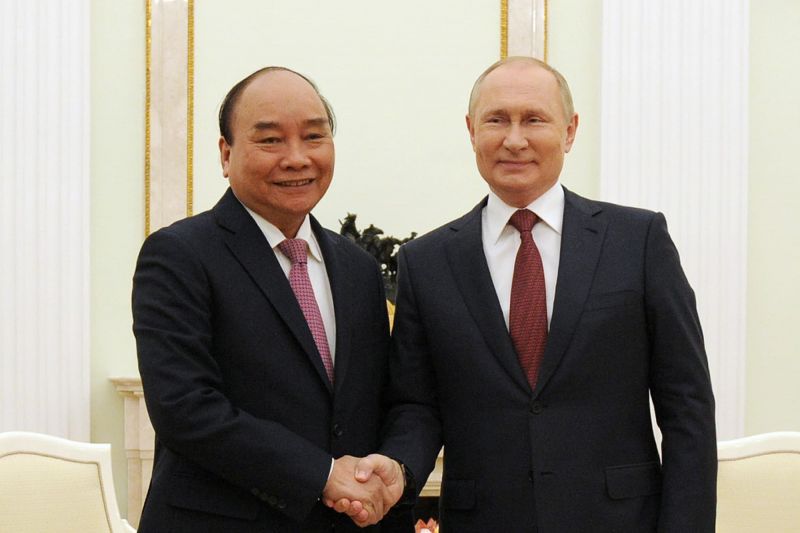 Commenting on a reported military drill between Russia and Vietnam, Derek Chollet, a senior policy advisor to the US Secretary of State, observed at the end of April that Russia was “a far less attractive partner today than it was even four months ago”. He added that Vietnam needed to reassess its relationship with Russia and the US was “willing to be a partner” as Vietnam evaluated its future security.

Still, there are limits to how far Vietnam can alienate Russia without compromising its own security. While Vietnam’s plan for the modernisation of its armed forces has slowed since 2016, and it has tried to diversify its sources of arms supply to minimise the risks, it is not easy to replace Russian arms. By comparison to other suppliers, Russian arms are cheap. The People’s Army of Vietnam also would face challenges in integrating new platforms that would replace Russian systems employed over many decades.

According to the Stockholm International Peace Research Institute, arms purchased from Russia over recent years include six Kilo-class submarines, four Gepard-class frigates, 36 Su-30MK2 multi-role fighters, two K-300P Bastion mobile units for coastal defense. Arms from Russia cost US$7.4 billion out of US$9.07 billion in total expenditure between 1995 and 2021. Between 1995 and 2014, Russia accounted for 90 percent of arms imports, although this fell to 68.4 percent between 2015-2021. The balance of Vietnam’s arms imports came from Israel (13.7 percent), Belarus (5.7 percent), South Korea (3.3 percent), the US (3 percent), the Netherlands (2.4 percent).

There is no doubt the high dependency on Russian arms and the flow on effect this has through the entire military structure from training to maintenance, operations and resupply does pose strategic vulnerabilities, especially in light of closer Sino-Russian alignment and increased strategic competition in the Indo-Pacific.

RAND senior defense analyst Derek Grossman has argued that the likelihood of China warring with Vietnam is greater than with Taiwan. There is a considerable risk of an “incident” in the South China Sea spilling over to the land border between Vietnam and China. This scenario arguably is more likely than a Chinese invasion of Taiwan.

But in one sense, both Vietnam and Taiwan face the same China threat. What’s going on in Ukraine right now has implications for the future of both, just as the French defeat at Đien Bien Phu in 1954 influenced the future of Algeria. The outlook for the Indo-Pacific will depend on how the region responds to the China threat through the effectiveness of its deterrence.

For Vietnam — one of the “swing states” in the region — that will mean a diplomatically delicate pivot away from its longstanding friend and weapons supplier in the interest of building a more modern military, backed by secure supply chains.

Nguyễn Quang Dy is a Hanoi-based writer. He is a former official in the Vietnamese Ministry of Foreign Affairs. He graduated from the Diplomatic Academy of Vietnam 1971, undertook postgraduate studies at the Australian National University (1976-1979), and attended Harvard University as visiting scholar and Nieman Fellow (1992-1993).

A version of this article also appeared on ASPI's The Strategist on June 15, 2022.