The world is still in shock over the execution of four pro-democracy activists in Myanmar over the 23-24 July weekend. More executions may follow in coming months. There has been almost universal condemnation of what were in effect state-sanctioned murders.There has also been a spate of articles and op-eds in the news media and online speculating about what these executions might mean in broader terms. Opinions have varied widely.

Most commentators have rightly noted the military regime’s brutality and disregard for human rights. Some have seen the executions as a sign of the junta’s increasing desperation, in the face of the unexpected and surprisingly resilient opposition to the 2021 coup. Others have described the regime’s motives as simply survival, and an attempt to cow the Myanmar population into submission. A number have seen the executions as evidence of the regime’s utter contempt for the international community and the principles it claims to uphold.

All these views are justified, to a greater or lesser extent. Certainly, the negative reaction to the executions, including from the usually reticent ASEAN, was not unexpected. However, there is another way of looking at recent developments, and that is by asking what the military regime hoped to achieve. Why go through the charade of show trials and judicial executions when the four activists could have been quietly disposed of in prison, which has been the tragic fate of so many other political prisoners detained over the years?

There has long been a school of thought that Myanmar’s military leaders are essentially uneducated peasants, bloodthirsty thugs with no other motive than to dominate Myanmar for their own personal benefit. For years, opposition cartoonists depicted them as monkeys in uniform. Some members of this school still seem to doubt that the generals are capable of rational thought. To support this view, they cite the regime’s record of brutal, narrow-minded and self-destructive behaviour, usually contrasted with the high ideals and noble aspirations of the pro-democracy movement.

Other observers, however, are more inclined to accept that Myanmar’s military leadership is now quite well educated and well informed, and is capable of making decisions based on what, to its peculiar way of thinking, can be described as logic and reason. The members of this analytical school recognise the appalling behaviour of successive military regimes, and share in its condemnation, but they feel it is important to try and understand how the generals see the world around them, and why they act as they do.

The armed forces leadership seems deluded on many counts, but most senior officers subscribe to a set of beliefs that underpins the policies adopted and decisions made. This includes a conviction that the armed forces (or Tatmadaw) have a special place in national affairs and are uniquely placed to ensure Myanmar’s unity, sovereignty, and stability. According to this mindset, State Counsellor Aung San Suu Kyi, her supporters, and other activists are seen as a threat to these three ‘national causes’, which must be eliminated. 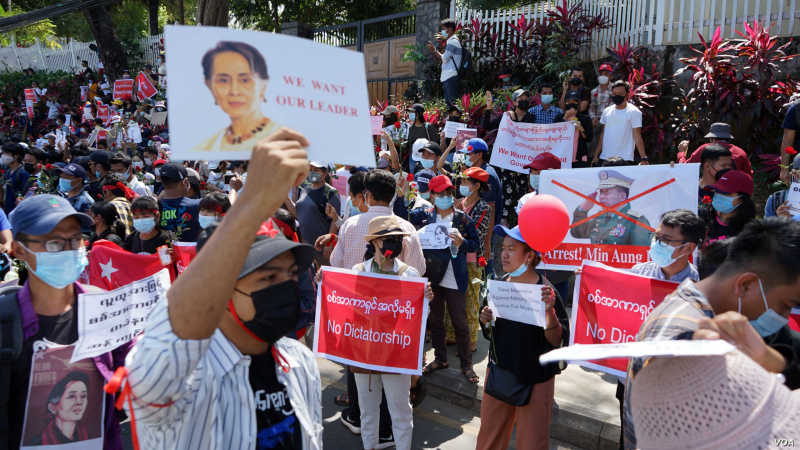 In this regard, it is worth asking why the junta executed four prominent pro-democracy figures last month. It has been reported that, against advice, Senior General Min Aung Hlaing was keen not only for the executions to occur, but for them to be announced publicly. What exactly did he hope to gain by doing this? What signals did he hope to send, and to whom? Pursuing such a line of enquiry might prove more productive in the long term than simply criticising the regime and demanding even tougher measures against it.

Firstly, it needs to be accepted that Min Aung Hlaing and those around him knew that the execution of the four pro-democracy activists would cause a tsunami of outrage and widespread condemnation of the regime. They understand perfectly well how they are viewed by most of their compatriots and members of the international community. They were clearly prepared to weather the inevitable storm. They had done so before and believed they could do so again. Rather than being a sign of desperation, the executions were carefully calculated.

This apparent confidence was doubtless informed by the many past instances when the local and international communities condemned the armed forces’ actions, but were unable to follow through with any measures that significantly changed the situation in Myanmar. Past opposition movements had been ruthlessly crushed. Strong rhetoric, economic sanctions, travel bans, arms embargoes and other such measures by foreign governments had been tried before, but demonstrably failed to change the generals’ thinking, or behaviour.

The current battle between the forces of light and the forces of darkness in Myanmar is different, for several reasons. For a start, there is greater and more sustained resistance to the Tatmadaw by a larger proportion of the population. However, it would appear that the generals believe that once again they can withstand the pressures being applied and outlast the forces arrayed against them. They must also take some comfort from the support they are receiving, both diplomatically and in practical ways, from Russia and China.

So, accepting all the above, what signals might the junta be trying to send? Above all, the execution of the four activists sends a strong message to the Myanmar people that despite its current difficulties the junta remains determined to prevail, regardless of the cost to its reputation, to civil society and to the country as a whole. To the generals, the end justifies the means, and the end they seek is total military victory and complete domination of the country by the armed forces. Anyone resisting the junta should be prepared to pay a very high price.

Given the regime’s dependence on the continuing loyalty and cohesion of the Tatmadaw, the national police force and intelligence agencies, it is perhaps not stretching this argument too far to say that the executions last month also send a message to the security forces’ rank and file. They are a reminder that any perceived weakness or support for the opposition movement will result in harsh penalties. The regime already tries to track down and punish deserters, some of whom are believed to have been executed.

To the members of ASEAN, the generals are sending another message, namely that no amount of external pressure from the regional grouping will dissuade them from doing whatever they believe is necessary to bring Myanmar back under their control. By clearly rejecting ASEAN’s ineffectual, but uncharacteristically strong, criticisms to date, the regime is also implicitly raising the possibility that, if pushed far enough, Myanmar could even withdraw from the association, either temporarily or permanently.

To the rest of the international community, the generals are making plain their complete rejection of the criticisms expressed, and various measures taken, to make them reconsider their policies and actions. Indeed, they want the world to know that the regime is determined to win its struggle against the many forces arrayed against them, both at home and abroad. They are not interested in negotiations, either with foreign governments and international organisations, or the shadow National Unity Government. Total victory is still their goal.

This is not to say that Myanmar’s military leadership is unaware of the enormous problems it currently faces, and the challenges it needs to overcome to achieve its long term aims. However, with the help of friends like Russia and China, the generals seem convinced that they will eventually win back the paramount position they once enjoyed. Bear in mind too that they do not have to win the civil war to remain in power, even if it is only in Myanmar’s ethnic Bamar-dominated heartland. They just have to avoid losing it.

If these are indeed the signals that last month’s executions were meant to send, then they reinforce the gloomy assessments offered by a number of analysts. The generals are unmoved by the world’s reaction to the coup and their attacks on the opposition movement. They are prepared to countenance the prospect of a devastated and fragmented country populated by poor, sickly and uneducated people, rather than make any concessions. The resistance movement is equally determined to defeat the junta, but has problems of its own, and is unable to deliver a knock-out blow.

In these circumstances, Myanmar is facing a long and bitter civil war that, one way or another, is likely to reach into the lives of all its citizens. It will be many years before the country can once again lay claim to its title of the Golden Land.

Andrew Selth is an Adjunct Professor at the Griffith Asia Institute, Griffith University, in Brisbane, Australia. His latest book is Myanmar (Burma) Since the 1988 Uprising: A Select Bibliography (4th edition) (Singapore: ISEAS Publishing, 2022).