Events in Hong Kong in the past days underscore the risk of pro-democracy protests triggering a spiral of violence.  As protesters and police clashed again, an ugly new element emerged. White-shirted pro-Beijing thugs were captured on video at a commuter station beating activists returning home.  As Donald Greenlees writes, Western governments, including Australia, will find it increasingly hard to stay on the sidelines of this bitter fight for Hong Kong's future as the Special Administrative Region counts down to the end of China's 'one country, two systems' guarantee in 2047.

The Hong Kong government has scrapped the extradition bill that triggered weeks of mass protests.  The back down on plans to allow criminal suspects to be turned over to Chinese courts might dissipate the size, although not the anger, of future crowds as Hong Kongers seek to cap their victory by pressing for a range of other demands, including the resignation of chief executive Carrie Lam. She reportedly (paywall) already offered her resignation to Beijing in recent weeks and had it refused.

It also will allow foreign governments to heave a great sigh of relief that they can avoid being drawn into another messy row with China.  But this is likely to be only a temporary reprieve for both Hong Kongers and those governments with a stake in the territory’s prosperity and stability.

The cancellation of the extradition bill looks like a small gain on the way to the inevitable erosion of the freedoms Hong Kong has enjoyed since the departure of the British on a wet and sweltering day in July 1997.  The reason the extradition bill has caused the gravest crisis since the handover and generated so much passion among young protesters is that it is emblematic of the existential threat Hong Kongers legitimately feel to their way of life.

The “one country, two systems” guarantee negotiated to facilitate the handover of the former colony to China comes to an end in 2047.  Uncertainty over what will come next has been a strong undercurrent in what have been the largest series of protests in the territory’s history. 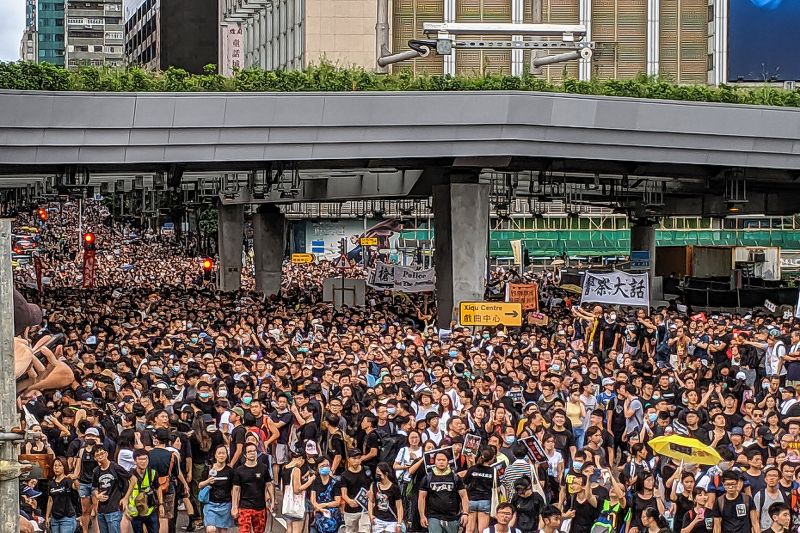 Planning for the “year 2047 problem” has been on the minds of business, politicians and the public for several years, with the capacity to increasingly influence some basic financial decisions like whether to take out a mortgage.  A survey by the Chinese University of Hong Kong in January found 51 percent of Hong Kongers aged 18 to 30 were thinking of leaving.  The most often cited destinations are Australia, Canada and Taiwan.

Tensions over the nature of future rule are likely to build the closer Hong Kong gets to that day of reckoning.  And so too is the problem Hong Kong poses for Western governments.

The history of international relations is replete with examples of small places and small disputes stirring up big problems. Hong Kong, with a population of just 7.4 million, has the potential to cause outsized trouble for several countries in their dealings with China.  It could become another political flashpoint in increasingly tense relationships.

So far, the reaction of Western governments to the extradition bill protests has been muted.  Although protesters cite examples of excessive use of police force, there have been no fatalities from the clashes. This has reduced the pressure for a more outspoken response in foreign capitals.  But this situation could quickly shift.  The police, one of the most respected public institutions, has lost a lot of credibility.  Now, video spreading on social media shows bands of thugs beating young protestors on the way home from a demonstration on Sunday night.  It highlights the significant risk of violence escalating and spilling over into the wider society.

Britain, which would like a post-Brexit trade deal with China, has warned Beijing to abide by the terms of the 1984 Sino-British Joint Declaration.  The joint declaration set the framework for Hong Kong’s Basic Law and has the status of international treaty. But China, which has in the past questioned the continuing relevance of the joint declaration, accused Britain of “gross interference”. 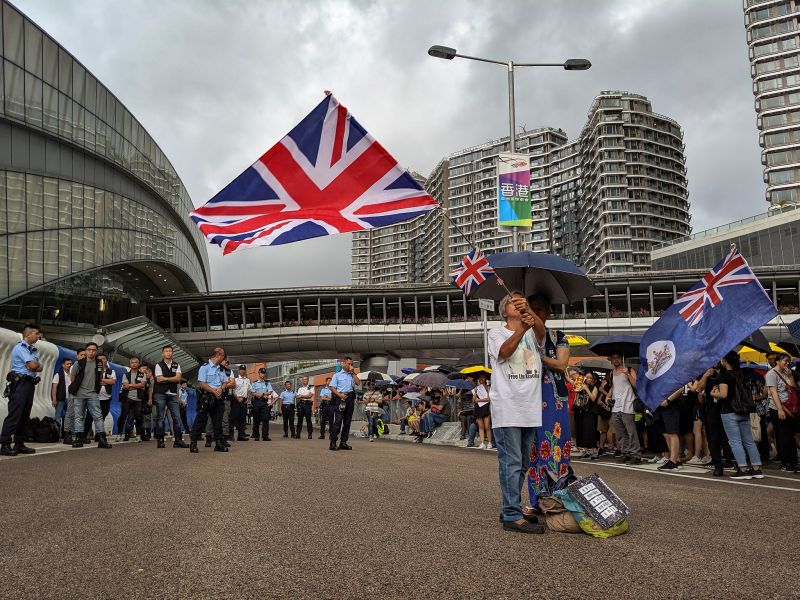 Britain is not the only Western country with a keen interest in what happens in Hong Kong in the coming years.  Australia is estimated to have 100,000 citizens living there.  Close to the same number of Hong Kongers live in Australia.  The territory is home to 120,000 alumni of Australian universities.  With more than 600 Australian businesses maintaining a presence as part of a $170 billion bilateral investment relationship, the Australian Chamber of Commerce for Hong Kong and Macau is the second biggest international chamber in the so-called Special Administrative Region (SAR).

Canada has by far the biggest number of foreign citizens living in Hong Kong – 300,000. Hong Kongers have already started trickling back to Canada in the past couple of years. Due to the high proportion of household and service industry employees, the Philippines and Indonesia have a combined Hong Kong population of 346,000, according to the last census.

The USA has 85,000 of its citizens living in Hong Kong, but the main issue for Washington is its economic stake in the place remaining vibrant and free.  The USA ran its largest worldwide merchandise trade surplus (US $31.1 billion) with Hong Kong in 2018, a fact that oddly does not figure in public discussion of the US-China trade dispute. The US Commerce Department estimated exports of goods and services to Hong Kong supported 188,000 US jobs as of 2015.

To understand what could go wrong in future years, one only has to appreciate what works well now.  As the US State Department noted in its latest annual review under the US-Hong Kong Policy Act, Hong Kong in contrast to the mainland operates an extraordinarily free and open economy.  For 25 years running, the Heritage Foundation has ranked it the world’s freest.

Hong Kong is unaffected by China’s tough cybersecurity law; it enjoys open access to Internet content; it operates its own customs, immigration and law enforcement agencies; it participates separately in a range of multilateral organisations and agreements, including the World Trade Organisation and Asia Pacific Economic Cooperation (APEC) forum; it is able to negotiate certain bilateral agreements with foreign countries, such as the free trade agreement it signed with Australia on 26 March; and it has its own currency and monetary authority that has operated autonomously from the People’s Bank of China.

Perhaps most importantly, Hong Kong has a separate judiciary with a strong tradition of rule of law based on the English common law.  It appoints non-permanent foreign judges from countries including Australia, Britain, Canada and New Zealand to the Court of Final Appeal, its highest court. The consequence is to provide enormous confidence in the judicial system for local residents and foreign investors alike. 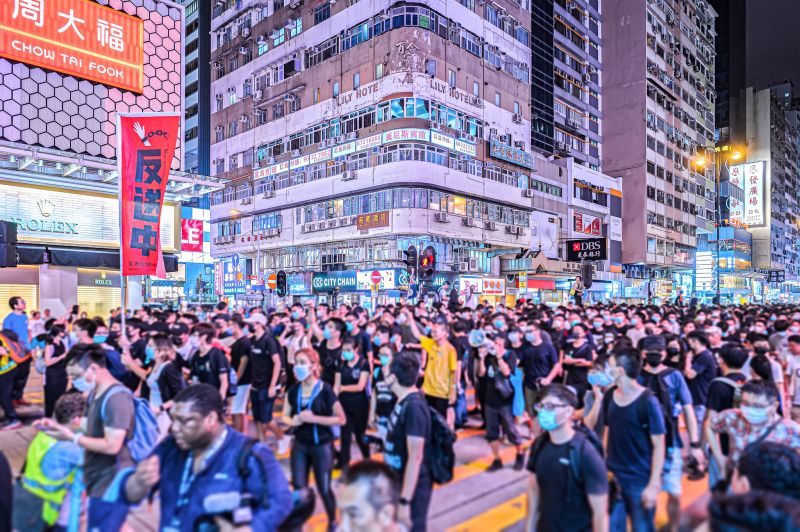 How much of this will survive in the lead up to and beyond 2047 is a matter of conjecture and concern.  The Basic Law only states that “the socialist system and policies shall not be practised in the Hong Kong Special Administrative Region, and the previous capitalist system and way of life shall remain unchanged for 50 years”.

If those freedoms are substantially eroded, China risks sparking an exodus of both foreign businesses and people.  In that event, the relationship between China and several foreign governments would be put to a severe test.  One of the big questions will be, how hard should those governments push the human rights agenda when it relates directly to the interests of their own (dual) citizens?

China demonstrated disdain for Hong Kong’s ‘independent’ judicial status even before the extradition law was proposed.  Some of those to have offended Beijing have simply been kidnapped and dragged across the border.  It is increasingly clear China’s president Xi Jinping and the Chinese Communist Party (CCP) place more weight on asserting central government authority than the collateral damage that does to the Hong Kong economy.

The pugnacious attitude might already be exacting a price on some of China’s other international priorities.  The trouble in Hong Kong has sent an unmistakable message to Taiwan that no dual-system formula agreed with the mainland can be trusted.

The prospects of Taiwanese President Tsai Ing-wen, of the Democratic Progressive Party (DPP), winning another term have been given a significant boost ahead of national elections next January after suffering a severe setback in local elections last year.  The revival of the fortunes of the DPP, with its strong record of asserting Taiwan’s separate identity from the mainland, parallels the growing concern about Hong Kong’s political freedom.

In January, Tsai rejected the idea of one country, two systems, pointedly referring to her position as the “Taiwan consensus”. This puts her at odds with her opponents in the Kuomintang who back the One China formula of the 1992 Consensus.

The risk of increased tensions between China and Taiwan is another way a deteriorating situation in Hong Kong can complicate the China policies of Western governments.

Yet any appeals to Beijing to practice enlightened self-interest in Hong Kong seem likely to fall on deaf ears.  It means Western countries will have to plan for a scenario in which they have to absorb both the damage to a key economic relationship and a wave of escaping Hong Kong residents.  Flight from mainland oppression is deeply embedded in Hong Kong’s DNA. The next wave of refugees potentially could be on a larger scale than the departures witnessed in the 1990s in the countdown to the handover.

Of course, the best insurance against that happening is consolidation of the one country, two systems arrangement in the years ahead, guaranteeing its life beyond 2047.  That would entail securing a separate political system based on a formula that satisfies local demands for universal suffrage.

But Beijing shows little appetite for further concessions.  It has consistently backtracked on promises to eventually allow direct elections for the chief executive.  Since protests in 2003 succeeded in overturning a security law, Beijing has been increasingly wary about giving Hong Kong too much latitude.

The erosion of political liberties has become increasingly pronounced under Xi’s presidency; the establishment of ‘redlines’ to limit freedom of expression evident in the past year with a series of actions against those advocating a separate Hong Kong identity. 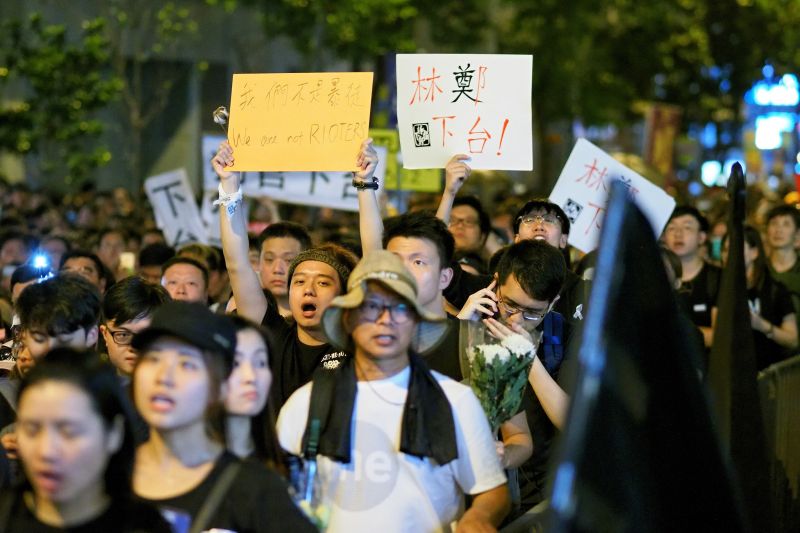 'We are not Rioters', says the banner held by a protester in Causeway Bay, Hong Kong. Photo by Etan Liam

All this suggests the trend will be to curtail rather than enlarge political freedom.  It sets the stage for a growing divide between Hong Kongers and the mainland.

The risks of escalation are high if the protest movement becomes further radicalised and does not keep its demands within the boundaries of the one country framework.  There are signs the youth is losing patience and prepared to employ tactics that will draw a security response.  One such act was the 1 July break in at the Legislative Council.

Two days later, Joshua Wong, an activist who has been repeatedly jailed, sent a message to his 228,000 Twitter followers quoting a warning from John F. Kennedy: “Those who make peaceful revolution impossible will make violent revolution inevitable.”

There is a need for compromise to make the one country, two systems formula work and establish a system beyond 2047 that recognises the unique character of Hong Kong.  But neither Beijing nor many of Hong Kong’s young pro-democracy activists appear capable of finding that middle ground.  If they fail, it will not be Hong Kong’s problem alone.

Donald Greenlees is a senior adviser to Asialink and visiting fellow at the Strategic and Defence Studies Centre, Australian National University.  He is a former Hong Kong correspondent for The International Herald Tribune and The New York Times. The views expressed are the author’s own.