The violent demonstrations that erupted on Jakarta’s streets last week in the wake of allegations of systematic fraud in April’s presidential elections are unlikely to disturb the confirmation of a second term in office for Joko Widodo.  But the attempts by opposition forces to de-legitimise Widodo’s victory could leave a lasting scar on Indonesia’s young democracy.

It was not quite up to the standard of the gilets jaunes of Paris.  To suggest it was the “worst” rioting since May 1998, as some have, risks gross exaggeration.  It only serves as a reminder of just how relatively peaceful Indonesian democracy has been in the 20 years since its resurrection.

But the rock-throwing demonstrators who closed down some major thoroughfares and inner-city neighborhoods in Jakarta for two days last week did enough to make a point.  What that point was exactly hasn’t been easy to fathom.

It appears many of them were paid – the going rate according to the police was IDR 300,000 (AUD 30) per person – and came armed for trouble.  The hard core prepared to brave the tear gas and fetid water bombed on their heads from firefighting helicopters probably numbered in the hundreds.  As paid demonstrators, it was hard to ascribe any motive to them, other than pecuniary and the diffuse anger that comes with being young, urban and poor. 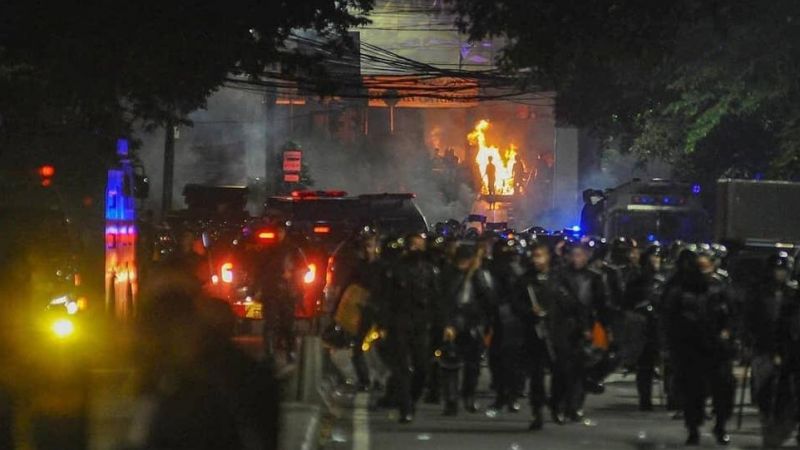 Their masters on the other hand have worked hard for months now to undermine confidence in an election they always knew they were likely to lose.  Their motives are more complex.

On 21 May, the Indonesian Election Commission declared Joko Widodo had beaten Prabowo Subianto by 55.5 percent to 44.5 percent in presidential elections held more than month ago.  The official result was released a day ahead of schedule, and in the early hours of the morning, to pre-empt attempts at disruption.

The margin of Widodo’s victory was almost 17 million votes.  Despite this, and what turns out to be a pretty accurate “quick count” on election day, Prabowo’s campaign has tried to cast doubt over the integrity of the process and every state institution involved in tabulating, verifying, monitoring and adjudicating the outcome. Riot police take a break in Jakarta. Image by Ibnumuhamaad via Instagram

In an election in which more than 154 million people cast a valid vote, irregularities were inevitable.  There were bound to be disputes over the reconciliation and counting of ballots.  There were reports money politics was again rife at the grassroots level.  Government resources were clearly used illegitimately to support the incumbent Widodo’s campaign.

Yet Prabowo insists that fraud and manipulation was so systematic and widespread it deprived him of a real total of 54 percent of ballots. Is there even a remote possibility Widodo’s campaign could steal votes on such a massive scale without being caught? No.

The Prabowo campaign now will take its complaints to the Constitutional Court, which says it will start hearings after the fasting month holiday and bring down a verdict on 28 June.  Commonsense suggests Prabowo will fail as he did in 2014, the last time he lost to Widodo and appealed to the court.

One of the obvious questions then is, why go to all the trouble?  There are likely to be multiple reasons, many of them necessarily speculative.  Prabowo’s own psychology undoubtedly plays a role.  People who have spent time with him in recent days describe his mood as volatile.

He might well have convinced himself at mass rallies and whistle stop visits around the country that he was on track to win.  He did collect 68.7 million votes.  His campaign advisers dismissed the mainstream public polls, pointing to internal polling that predicted a Prabowo victory.  Pity the poor factotum who told Prabowo he would lose.

The defeat is a resounding personal blow for a man who has aspired to run the country for as long as he can probably remember.  Some say he was groomed for high political office from an early age – the late economist Thee Kian Wie, who knew the family well, once described Prabowo’s father, Sumitro Djojohadikusumo, as the “Joseph Kennedy of Indonesia”. On a more practical level, Prabowo might well calculate that he can increase his leverage in a post-election bargain over executive and parliamentary jobs and state policy and resources by keeping the pressure on Widodo.  The carve up of power and resources between political parties is only just starting.  Two parties in the Prabowo coalition – the National Mandate Party (PAN) and the Democrat Party – are showing signs of defecting.  No one wants to spend five years in the cold.

Moreover, Prabowo has surrounded himself with a cabal of old Indonesian military (TNI) officers, who act as key advisers.  The motives of this group for supporting Prabowo’s attempts to de-legitimise the election likely vary.  Some are simply long-term loyalists who moved up the ranks with Prabowo in the 1970s, 80s and 90s.  Where he goes they go.  Others are part of a group who have fond memories of the New Order and the special place TNI occupied at the time.

There is no concrete evidence that TNI as an institution, or senior officers, have breached the obligation of electoral neutrality.  But there are officers who are disgruntled over the privileged place of the police in the internal security power structure and the absence of opportunity this entails.  The retirees are a conduit for this sentiment.

According to one veteran analyst of TNI, academy classes are too bloated and there are not enough senior jobs to go around above the rank of colonel.  In his view, the recent push to restore a role for TNI in civilian life is less about turning the clock back to the New Order than of easing internal pressure in TNI.  Still, there is a widespread view democracy has provided too much public space to forces that undermine the integrity of the state.

Adding to the peculiarity of Prabowo’s coalition are a mix of some of those figures who trouble old school TNI – Muslim hardliners of the 2nd of December (212) movement, who campaigned to remove former Jakarta governor, Basuki Tjahaja Purnama, for insulting Islam, and various outliers like the Islamic Defender’s Front (PFI).

Their intention appears to be to either to fatally wound Widodo’s presidency or to undermine his authority to govern.  For many of them simply disrupting the system and eroding its credibility looks like a victory on the road to a more explicitly Islamic state. Rounding out the eclectic mix of Prabowo backers are the core of his political coalition – his personal party vehicle, Gerindra, and the Muslim Prosperous Justice Party (PKS).   The discovery of an ambulance bearing a Gerindra logo and containing money and rocks casts doubt over claims by party officials that their intentions were peaceful.

Still, the diversity of the Prabowo coalition makes it hard to identify the purpose or affiliation of all the protestors who besieged election agencies in Jakarta. This fact worried security forces, who feared the infiltration of provocateurs and terrorists.

Authorities claim they have identified suspects who had plans to carry out killings under the cover of the demonstrations.  Several people did die but the circumstances remain under investigation.

Despite the ambiguity, Prabowo’s Delphic attempts to claim it was all beyond his control when it turned violent look disingenuous.  He had warned the denial of his claims of victory could spark a “people power” movement.

Police have detained and questioned a number of prominent figures over attempts to instigate unrest, including a retired commander of the Army’s Special Forces (Kopassus), Maj. Gen. (ret) Soenarko, who is close to Prabowo.  It is not certain how far Prabowo’s allies or the miscellaneous troublemakers on the streets were prepared to go in their attempts to destabilise the government.

Undoubtedly, the government’s actions in reinforcing security forces from regions outside Jakarta and curtailing access to social media served to contain the situation.  The leadership of the police made the risky, but ultimately wise decision, to limit the distribution of weapons to riot police and ensure armories only issued rubber bullets.  The restraint of those on the frontline despite spending days and nights on hot and humid streets won the police a rare vote of public thanks.

One measure of success was the reaction of what might be regarded as a bellwether community, the Chinese.  They had been one of the main targets of rioting in 1998.  Many then fled the country.  This time most of them stayed at home.

But even as the barricades come down and Jakartans return to work this week, the risk of further unrest will leave the city on edge as the political drama plays out in the coming weeks and months.

Prabowo’s persistent allegations of cheating are an incitement to credulous supporters and serve to discredit the electoral process and its institutions.  The real impact of the unrest might outlast Prabowo’s ambitions in the form of lingering distrust of a political system that for reasons of its relative youth remains fragile.

This article was first published in The Stategist.

Donald Greenlees is senior adviser to Asialink, the University of Melbourne and a visiting fellow at the Strategic and Defence Studies Centre, Australian National University. The opinions expressed are his own.