As China marks 70 years of communist rule, Beijing will benefit from absorbing the lessons of history in its relations with Southeast Asia.  An early foreign policy that saw the People’s Republic try to impose its views on southern neighbors left a legacy of years of mutual suspicion and acrimony that lingers in some quarters today.  Asialink senior adviser Donald Greenlees writes history risks repeating itself if China’s leaders fail to accommodate the region’s core interests.

Wang Jen-shu, the first ambassador to Indonesia of the People’s Republic of China, spent a troubled couple of years as Beijing’s man in Jakarta in the early 1950s.  He clashed repeatedly with a prime minister, Sukiman Wirjosandjojo, known for pro-American sympathies, as he sought to advance the shared interests of the Chinese and Indonesian communist parties.

Wang, a firebrand writer of poetry and short-stories who published under the name Baren, had been a stalwart of the Chinese Communist Party from the 1920s.  He spent the war years in Indonesia and spoke the language fluently.  But the belief of Chinese leaders that Indonesians saw “their own tomorrow” in the Chinese people proved badly wrong.

They misread the strength of their position in Indonesia.  Wang gave speeches critical of the USA, railed against a Sukiman crackdown on the Indonesian Communist Party (PKI), and tried to lure local Chinese away from the rival Kuomintang.  Sukiman retaliated by forbidding the entry of a group of Chinese officials and restricting consular activity.  Wang was eventually called home; the bilateral relationship in disrepair.

The awkward start to relations between the two newly-declared republics set the scene for a rollercoaster relationship in the following decades. From the opening of diplomatic relations in April 1950 until Jakarta unilaterally broke them off in October 1967 Indonesia and China veered from being virtual allies under one president, Sukarno, to bitter foes under another, Suharto. The torrid start to Indonesia’s relations with communist-ruled China was shared by its neighbors in Southeast Asia, who all to varying degrees experienced upheaval in their international and domestic affairs as a direct result of the emergence of a united, communist-controlled China on the Asian mainland after 1949.

Cold War superpower rivalry, communist insurgencies often backed by Beijing, precarious relationships with local Chinese populations, and fragile, ideologically-divided domestic politics bedeviled the management of ties between China and Southeast Asian countries that were struggling to build viable states and modern economies at the end of an era of European colonisation.

China’s fraught relationship with the region only started to change in the 1970s; first, with the Sino-American détente and, second, with the launch of paramount leader Deng Xiaoping’s open-door economic policy.  By then, Beijing had renounced contentious foreign policy doctrines like united fronts with overseas communist parties and “third camps” in opposition to both US and Russian power.  Deng’s economic pragmatism and his on-going rapprochement with the USA established a new foundation for China’s foreign policy and diplomacy in Southeast Asia.

Still, the story of the past 70 years of China’s relations with a region of immense strategic importance to it has remained one of simultaneous opportunity and apprehension.

Generations of Southeast Asian leaders have been drawn to Beijing in recognition of the vast economic and strategic potential of China.  They also have brought with them long memories and lingering concerns over how China uses or abuses its power.  And they have viewed the accomplishments of the Chinese political system and people with both admiration and ambivalence, probably in equal measure.

Along the way, Beijing has had only mixed success with its regional foreign policy and diplomacy.

It has enjoyed its moments of ascendency, like during the Asian financial crisis in 1997 when it refused to devalue the yuan, relieving pressure on the Thai baht and Indonesia rupiah, or in the early 2000s when a charm offensive under presidents Jiang Zemin and Hu Jintao saw China emphasise respect for the sovereignty of ASEAN states, sign their treaty of amity and cooperation, and start negotiations on a code of conduct in the South China Sea.

It also has been embroiled in a variety of conflicts with countries that have very different histories, cultures and national interests.  The problems have not always been of China’s making. Within months of its diplomatic win during the financial crisis, Chinese foreign minister Tang Jiaxuan delivered a blunt warning to Indonesia over the deliberate targeting of ethnic Chinese in the riots of May 1998. This had sparked “indignation among Chinese all over the globe,” according to Tang.

But too often China has been guilty of overreach.  No strategic issue has loomed larger for Southeast Asia in recent years than China’s unilateral declaration in 2009 of sovereignty over more than 80 percent of the South China Sea.  It is not just the claim, it is what it says about the calibre of Beijing’s strategic judgment and how China will behave as it becomes militarily and economically stronger.

China is steadily acquiring the military capability to project power over vital Southeast Asian sea lanes as it builds bases in the South China Sea.  For archipelagic states that regard control of waterways as intrinsic to national cohesion and ideas of sovereignty, this is a sensitive issue. Against this backdrop, the martial character of the 70th anniversary parade overseen by President Xi Jinping might be a matter of pride to China but it can appear unnerving to its neighbors. It invites attention to a yawning gap between the rhetoric of Chinese leaders in recent years and their actions.

Pham Quang Vinh, a former senior official in the Vietnamese foreign ministry, accuses China of using “intimidation and coercion” to asserting its claims in the South China Sea, raising the question of whether it can really negotiate the code of conduct for the area in “good faith”.

It’s a sentiment many others share, but feel powerless to do much about.  Malaysia harbors grievances over the oppression of Uighur and Hui Muslim’s in China and the regular intrusion of Chinese survey vessels into what Kuala Lumpur regards as national waters.

“We don’t go around trying to be aggressive when we don’t have the capacity, so we use other means,” Prime Minister, Mahathir Mohammad, said in an interview with local media just ahead of the People’s Republic anniversary.  But in a subtle jab at Beijing, he referred to how in the days of imperial China emperors exacted tribute in the form of “gold and silver flowers every year as a symbol of our being practically, well, subservient to them”.

Xi has promised peaceful engagement and mutual benefit in dealing with Southeast Asia in a “community of shared interests and common destiny”.  Much of that is built on the pull of Chinese trade and investment.  With two-way trade of $US 588 billion, China is Southeast Asia’s biggest trading partner.

But there are worries the economy too could be a source of leverage for Beijing to pursue its strategic ambitions.  Across the region, governments are hedging against dependency on Chinese markets and capital. 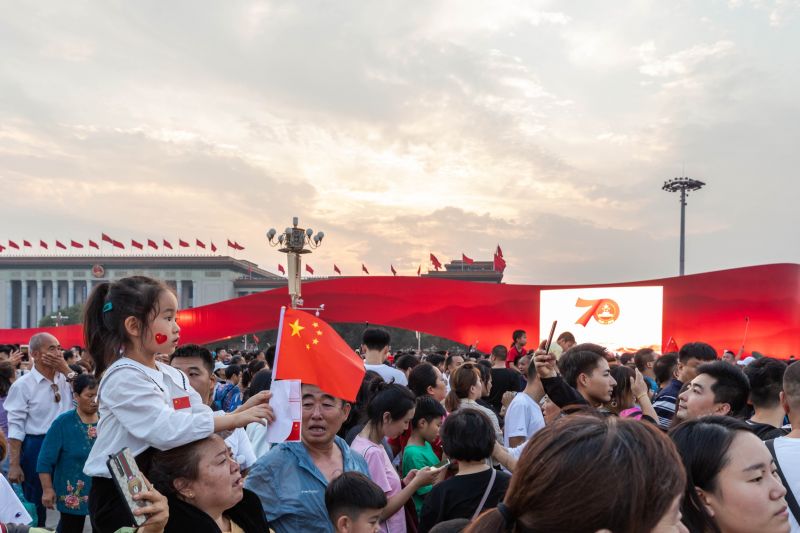 Even as they sign up to infrastructure projects under China’s huge Belt and Road Initiative, they spread the risk by inviting other countries to participate in major investments.  India is building a deep-water port at Sabang in Aceh, on the westernmost tip of the Indonesian archipelago, which Indian media say will give New Delhi “wide access to Southeast Asia as a counter-balancing force”.

The implied message to Beijing is that “we need you, but you need us”, according to Dr. Philips Vermonte, the executive director of the Centre for Strategic and International Studies in Jakarta.

The key question is whether China and the region can reach an understanding that avoids the trap of repeating a conflicted history.  Southeast Asia eagerly embraced the softer version of Chinese power on display during the charm offensive of the early 2000s.  The region now inevitably has to create space for a more powerful China that wants to see the regional order “gradually readjusted and reconstructed”.

How that is done could prove very unsettling to a region that prizes its own autonomy as much as the opportunity inherent in Chinese wealth. China too will have to recognise it serves many of its own core interests when it accommodates those of its southern neighbors.

Donald Greenlees is senior adviser to Asialink, University of Melbourne, and a visiting fellow at the Strategic and Defence Studies Centre, Australian National University.  The views expressed are his own.