John McCarthy reviews the implications of the war in Ukraine and concludes we face a return to an era of great power conflict.

In recent years, Australia has had its share of hard foreign policy challenges; they are about to get harder.

A week after the Russian invasion of Ukraine, these are some of the things that we need to think about.

Ukraine’s dominance of the headlines will end. But President Putin has placed European security on the West’s front burner, in a way not seen since the fall of the Berlin Wall.

The Americans can talk and chew gum at the same time. Secretary of State Blinken reminded our region of this last month when, as the Ukraine crisis accelerated, he attended the Quad meeting in Melbourne. But even a foreign policy and security apparatus as experienced as that of the United States has difficulty in maintaining simultaneous sharpness of focus over a period in two major and problematic theatres. Second, the Europeans must perforce concentrate on their own continent as Ukraine’s changed status under Russian dominance prompts reappraisal of the means to achieve and maintain European security in a new configuration of power.

Despite ongoing concerns about Russia’s activity on NATO’s eastern flank, its members have recognised the need for strategies to protect their interests from China. While their concerns and approaches are not on all fours with those of the Americans, the Japanese or us, they demonstrate an awareness of the Chinese technological challenge and of the long-term implications of Chinese military heft. At bedrock, the West has been developing a common sense of direction on China.

Only weeks before the invasion of Ukraine, the major Europeans had been telling Australia that they recognised that over the long-term China would be a bigger global challenge than a belligerent but economically inferior Russia. But the invasion of Ukraine last week has been a stark reminder of the bad days of the Berlin crisis in 1948, Budapest in 1956, and Prague in 1968. Sitting in Berlin or London, let alone Warsaw or Riga, the Russian threat has an immediacy not matched by concerns about China.

That said, a third point is that the outcome of the 4 February Xi-Putin summit creates a measure of fusion between the West’s challenges in the Atlantic and Indo-Pacific theatres. This could introduce new dynamics to both. 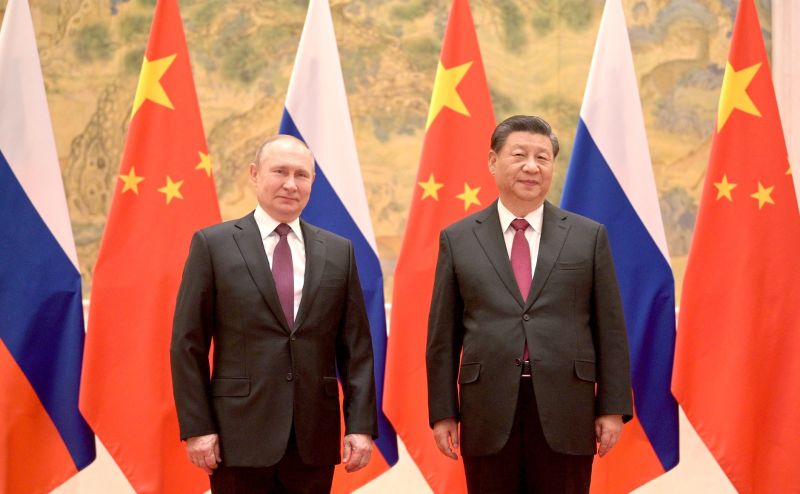 The mutual suspicion between Russia and China, their rivalry in Central Asia, and their ongoing if quiescent border issues, militate against the creation of a Sino-Russia axis. Moreover, Chinese responses to the Ukraine crisis demonstrate sympathy with Russia’s concerns about alleged NATO encroachment rather than endorsement of Russia’s invasion of Ukraine.

But the language coming out of the Xi-Putin summit was carefully negotiated. The partnership was described as having “no limits”. Tellingly also, as mentioned by The New York Times, Putin and Xi have met 38 times since holding their current positions. They may not have created an axis, but they are strategically close in their opposition to the West. Only the imprudent would refrain from close scrutiny of what the relationship now means.

Fourth, the Russian invasion also poses diplomatic complications amongst countries who are united in opposition to China.

In India, and other countries that have close relations with Russia, such as Vietnam, there is some sympathy with Russia’s arguments about NATO encroachment. Some in those countries believe the West may be putting too much focus on the wrong enemy.

In the Quad foreign ministers’ meeting on 11 February, India took a different position on Ukraine to the others – reflecting its close economic and defence ties with Russia. The Japanese and the Americans reportedly have sought to persuade India to change tack.

Fifth, for a generation the fear of nuclear warfare has been restricted to concerns about aberrant behaviour by small actors. This has changed. Putin’s threat on the first day of the invasion that western intervention would have consequences “greater than any faced in history”, and his placement of nuclear forces on alert on 27 February, once again raise the spectre of the massive destruction so central to strategic thinking during the Cold War.

Sixth, like it or not, the Ukraine invasion is a minus for the West and a plus for China.

There are bright spots. NATO members have been showing more unity than even a few weeks ago. Ukraine might tighten NATO discipline and resolve. It might in the end compel the Europeans to pick up a greater part of the cost of European defence. The Americans have shown leadership that would have been impossible in the purgatory of the Trump administration.

But Putin is achieving what he set out to do — effective control over Ukraine — and the West is failing to stop him.

China is owed by Russia and is likely to be economically indispensable to it. While uneasy with aspects of the Ukraine invasion, it benefits from an immediate western preoccupation with the Atlantic theatre and a perception globally that the West has lost ground in Europe.

It is no comfort that Russia’s economy will move all the more into decline in coming years.

Finally, with the breakdown of diplomatic process in the European Atlantic theatre and heightening tensions in the Indo-Pacific we must face the fact that the generation of peace between major nation states is coming to an end. An era more defined by the exercise of hard power — close to the travails of the 20th century — is beginning.

John McCarthy AO is Asialink senior adviser and a former ambassador to the US and numerous Asian countries.

A version of this article appeared in the Australian Financial Review on February 28, 2022.