With the economic challenge lying at the heart of Australia's fraught relations with China, James Laurenceson argues the risk of exposure to the Chinese economy is far weaker than commonly assumed and the big challenge is to diversify what we export.

The Morrison government has, for the most part, maintained Canberra’s traditional “hands off” approach to Australia’s international economic engagement. That’s been the case even with respect to China as the wheels have fallen off the political relationship.

Beijing might object to that characterisation and cite numerous investment proposals that have been blocked. But there’s far more evidence that Canberra has continued to recognise that robust and unfettered economic ties serve the national interest.

In September 2019, at the same press conference that US President Trump described China as a “threat to the world”, Prime Minister Scott Morrison insisted that “China's growth has been great for Australia”.

In May 2020, shortly after political tensions began spilling over to disrupt some Australian exports, Morrison stuck to the position that commercial interactions with China involve “a judgement Australian businesses can only make…those are not decisions that governments make for businesses”.

To be sure, the government has been clear in its messaging that businesses face rising geopolitical risks. In March 2021, Australia’s ambassador to China, Graham Fletcher, told a business forum that, “You've just got to imagine that, unexpectedly, you may lose your China market for no good reason other than that Beijing has decided to send a message to Canberra”.

Still, as recently as last September, in a speech otherwise calling for businesses to boost their resilience through greater market diversification, Treasurer Josh Frydenberg acknowledged that many Australian businesses had “worked hard to access the lucrative Chinese market”. This, he said, had “brought great benefits to them and to Australia overall. And they should continue to pursue these opportunities where they can”.

Trade Minister Dan Tehan has also endorsed the business community stepping up to engage their Chinese counterparts in dialogue even as Beijing continues to block meetings with Australian government ministers.

Yet the calls for Canberra to change tack have grown louder.

In May last year, Peter Jennings, the Executive Director of the Australian Strategic Policy Institute claimed that “economic dependence on China is dangerous” and then demanded that “steps must be taken to reduce that dependence”.

There is also the possibility that a future US administration, particularly a Republican one, might head in a radically different direction – and pressure us to follow.

In 2021, Matt Pottinger, a former senior Trump administration national security official, wrote on economic engagement with China: “Elected leaders must now take the next step ... because companies are economic actors, not political ones, it is the government’s responsibility to establish guidelines for engaging with adversaries”.

In some quarters Australia’s economic relationship with China is already seen as an alliance issue. In June 2019, Charles Edel and John Lee of the United States Studies Centre passed on the message that, “The United States would like Australia … to lessen its commercial dependence on China”, before themselves going on to advocate for “active diversification”.

Such calls for a more interventionist and prescriptive policy approach deserve to be interrogated.

This is not because the risks from economic engagement with China aren’t real. Rather, what is apparent from interviews with business leaders is that most are already acutely aware that geopolitical fallout might impact their operations and are pro-actively managing the possibility. And the scale of potential disruption at an industry or national level should not be exaggerated.

Starting in May 2020, Australian exports have been the target of a campaign of coercion by Beijing that is unprecedented in Chinese economic statecraft for its breath and longevity. Yet what this campaign has most clearly demonstrated is that exposure does not mean dependence, and the relationship between exposure and risk is far weaker than commonly assumed.

Consider the case of cotton. In September 2020, three-quarters of Australia’s exports went to China. The next month local producers lost access to the Chinese market almost entirely. Yet rather than being a catastrophe, Australian cotton was swiftly re-directed to other customers and with an imperceptible hit to the unit prices earned.

What mattered was not exposure but access to an effective mitigation mechanism – in this case, global markets. It turned out that cotton exporters knew what they were doing all along. This shouldn’t, in fact, be surprising: they were the ones who had skin in the game after all.

And last year, the total value of Australia’s exports to China actually hit a record high. In large part this was because Beijing has been unwilling to disrupt big-ticket items like iron ore. To do so would only hurt its steelmakers. Here then it is China’s self-interest that is mitigating risk, even as it buys around 80 percent of Australia’s iron ore exports. 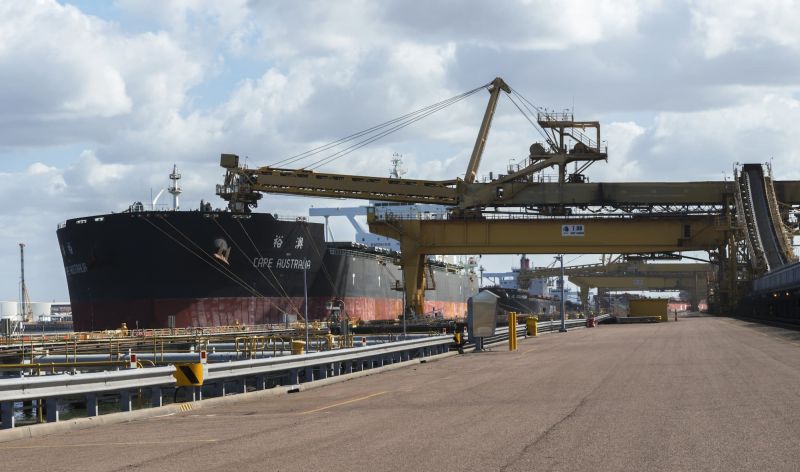 Australia's exports to China hit a record high in 2021, despite the realities of the political relationship between the two countries. Image credit: Shutterstock.

All of this is not to say that public policy has no useful role to play. But policy responses must start from an accurate diagnosis of the nature of risk and its scale.

A medium-sized economy like Australia will inevitably develop significant exposures to much larger economies, like China and the US. Benchmarked against peer economies, for the most part Australia’s overall trade exposure to its single largest customer doesn’t stand out. The degree of product concentration found in Australia’s export basket, however, marks it as an outlier.

The real challenge for Canberra then is not so much convincing other capitals to open their markets to the goods that Australia currently exports but rather in enhancing the domestic economy’s ability to supply a broader basket of goods and services internationally.

And diversification is just one way to manage risk. For example, despite an iron ore price boom adding billions of dollars to federal government coffers since 2020, there have been no additional injections into the Future Fund. An opportunity to insure against a rainy day has been missed.

Australian policy must also be cognizant of global economic realities.

The baseline forecast found in the 2017 Foreign Policy White Paper is that China’s economy will add more new purchasing power out to 2030 than the US, Japan, India and Indonesia combined. Other capitals won’t be striving to cut their businesses and households off from that opportunity.

Even in the US where an economic “decoupling” from China has had the most political currency, the policy direction is uncertain. Last September, President Biden’s Commerce Secretary, Gina Raimondo laid out her latest thinking: “There’s no point talking about decoupling…we have no interest in a cold war with China. It’s too big of an economy – we want access to their economy, they want access to our economy”. She added, “I actually think robust commercial engagement will help to mitigate any potential tensions”.

For Australia, this marked quite a shift from a promise made by Washington just six months earlier that it was “not prepared to improve relations in a bilateral and separate context [with Beijing] at the same time that a close and dear ally is being subjected to a form of economic coercion”.

Working with strategic partners to constrain China’s coercive economic practices makes good sense. At the very least, internationalising Australia’s predicament can inflict reputational costs on Beijing for its actions. But talk of forming an “economic alliance” with the US, Quad or Five Eyes partners lacks credibility. For starters, strategic friends are frequently fierce commercial rivals, as trade data showing lost Australian sales to China being snapped up by producers from the US, Canada and New Zealand makes clear.

Not everything in the Australia-China relationship is broken. Whichever party forms government in May would do well to make its default policy position one that lets businesses and households continue getting on with the job of engagement.

Professor James Laurenceson is Director of the Australia-China Relations Institute at the University of Technology Sydney.

This article was contributed as part of an Asialink Insights series on the China policy challenge facing Australia.