With tensions sharpening ahead of the formal announcement of Indonesia’s election results on 22 May, the government has started to crack down on threats of unrest by radical Muslim supporters of defeated candidate Prabowo Subianto. However, the strength of Prabowo’s own Islamic credentials are dubious, writes veteran correspondent John McBeth. The question now is how far is he prepared to push his claims to have been cheated out of victory. The sole Muslim in a family of Christians, even pragmatic politicking doesn’t adequately explain how retired special forces general Prabowo Subianto, the former son-in-law of long-serving authoritarian leader Suharto, has ended up as the unlikely champion of Indonesian Islamists.

Only as a Muslim could Prabowo fulfil his father’s dream of assuming the presidency of Indonesia, a dream that now appears to have died after he lost the second successive presidential election to Joko Widodo by a significant 12 percent margin on 17 April, according to the latest official vote count.

Yet while even many educated Indonesian voters see Widodo as un-Islamic and believe in false stories spread on social media that his parents were members of the Indonesian Communist Party (PKI), they conveniently overlook the fact that Prabowo himself is hardly devout.

“Prabowo is a Muslim, but he is not a pious Muslim,” his vice-presidential candidate, Sandiaga Uno, struggled to explain at one point. “He has repeatedly said he is only a Muslim on his identity card, but now he’s learning to be pious.”

The strangeness doesn’t end there.  Widodo grew up in rural Java, steeped in Islamic traditions and with little experience of the outside world. Prabowo was born into a blue-blood family, a paid-up member of Indonesia’s top one percent with an elite Western education.

Prabowo’s alliance with the 212 Movement, the conservative coalition which brought down Jakarta governor Basuki Tjahaja “Ahok” Purnama in 2017, has caused concern among security chiefs with the opposition leader threatening a people’s power revolution over what he claims has been voter fraud. Joko Widodo, who looks set to serve a second term as Indonesian President. Image by the Australian Embassy, Indonesia

Widodo won the election in populous East and Central Java, increasing his vote there largely because of backing from Nahdlatul Ulama, the moderate mass Muslim organization. But he lost West Java and apparently 12 of the other 34 provinces, mostly in Sumatra and Sulawesi.

Widodo’s supporters blamed the failure to make up ground in West Java on a backlash from followers of Hizbut Tahrir Indonesia (HTI), the extremist Islamic organisation outlawed last year for its support of a global caliphate.

Defence Minister Ryamizard Ryacudu, a former army commander, and police chief Tito Karnavian have both warned in recent days that the 67-year-old opposition leader’s continued references to “people power” could be regarded as treasonous. 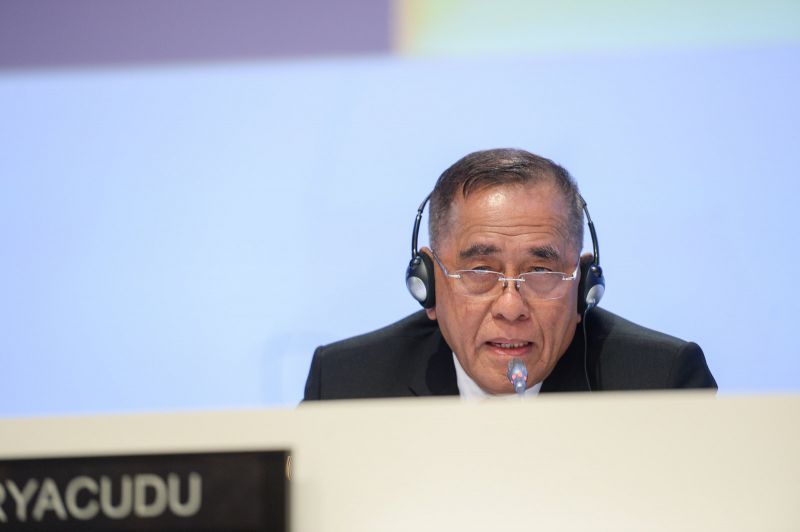 On 9 May, police followed up on that threat by indicting rabble-rousing former labor leader Eggi Sudjana on treason charges, apparently hoping to head off rumored plans for a series of mass demonstrations in West Java and the other provinces where Prabowo won by a substantial margin.

Sources close to the security apparatus say the Government appears to have backed off plans, at least for now, to detain maverick ex-Army Strategic Reserve chief Kivlan Zen, 72, a retired three-star general who was one of Prabowo’s allies in the late 1990s.

Zen and Sudjana led a 9 May rally outside the Elections Supervisory Agency (Bawaslu), which police broke up for lack of a permit. The protestors were demanding Widodo and running mate Ma’ruf Amin be disqualified from the presidential race. Prabowo insisted in a briefing with foreign journalists last week that he was not inciting unrest and that demonstrations would break out spontaneously when the National Election Commission announces the official results of the simultaneous presidential and legislative elections on 22 May.  But his failure to denounce demonstrations or call for calm could be easily taken as a signal of support for mass action.

Armed forces chief Air Chief Marshal Hadi Tjahjanto has repeatedly warned against unconstitutional acts and both the police and military have closed ranks in refusing to issue permits for any election-related street protests, clearly fearing they might spiral out of control.

Prabowo’s flirtation with radical Islam began before the fall of Suharto in 1998 when he aligned himself with a coterie of so-called “green” generals and Muslim conservatives in a losing power struggle with then military commander General Wiranto.

In fact, his ties to the burgeoning Islamist movement became so obvious at the time that Prabowo’s protective brother, businessman Hashim Djojohadikusumo, complained to one correspondent: “Why are you making my brother out to be an Islamic extremist.”

Still, the allies he made in the Muslim community allowed him to enter politics when he returned from self-exile in 2001, first in a failed effort to win the leadership of the Golkar Party and then in forming Gerindra, which has turned out to be a family endeavor.

Religion did not play any role in Gerindra’s first foray into electoral politics in 2009 where it won a commendable 4.4 percent of the vote.  But Prabowo’s eye was always on the main prize – the presidency.

When he launched that bid in 2013, he found himself initially having to rely on the National Mandate Party (PAN) and the Sharia-based Justice and Prosperity (PKS) and United Development (PPP) parties to meet the threshold needed for his nomination.

His brother’s only condition was that Prabowo did not choose anyone from PKS or PPP as a vice-presidential candidate. Despite being a latecomer, PAN leader Hatta Rajasa conveniently filled the bill.

Prabowo was eventually beaten in 2014 by the popular Widodo, but he wasn’t finished yet, reaching out to the Islamic Defenders Front (FPI) and other radical groups to support his candidate, ex-education minister Anies Baswedan, in the campaign to unseat Jakarta governor Purnama, Widodo’s ethnic Chinese Christian ally.

While Prabowo was not always at the forefront, the display of unbridled racism and sectarianism of that campaign reverberated around the country and set the stage for a presidential election that has revealed just how sharp Indonesia’s religious divisions have become.

With FPI leader Rizieq Shihab forced to flee into exile to escape charges of sexual deviance, Prabowo vowed in numerous speeches to protect religious leaders from criminal prosecution, citing the contribution Muslim clerics had made to Indonesia’s struggle for independence.

Prabowo brushed aside the fact that the FPI has been responsible for a long string of violent acts against religious and other minorities which were largely ignored by law enforcement.

Now, with his church-going family remaining conspicuously in the background, the time has arrived to determine whether the marriage of convenience between Prabowo and his allies will survive and continue along the dangerous path of identity politics.

For some, a Prabowo victory would have answered some intriguing questions about how he would have dealt with the conservatives around him. Still clear in the mind of one journalist is brother Hashim’s vow of five years ago about a Protestant church which had been forcibly closed in suburban Bogor: “On Day One of a Prabowo presidency, that church will be open.”


John McBeth is a former long-serving correspondent of the Far Eastern Economic Review, He has lived and worked in Asia for 48 years. The opinions expressed in this article belong solely to the author.