Australia’s changing and challenging relationship with China needs for more – not less – China literacy in our schools.

The past two years has been a difficult time to see Chinese people and Australians of Chinese heritage in Australia made to feel uncomfortable and marginalised. Last year, during Senate hearings, Chinese-Australians were challenged over their loyalty to Australia and enquiries were called into Confucius Institutes which support Chinese language learning in Australia. The pandemic has accelerated a major breakdown in diplomatic and trade relations between Australia and China. Our current defence alliances confirm that our preferred relationships lie in the Anglosphere.

Already I have encountered a pattern of Australian school leaders who have pulled-back from engaging with schools in China. They often give awkward explanations about how they aren’t really sure what to do. It wouldn’t be surprising to see a fall in the number of Australian children studying Mandarin at school given the negativity and anxiety that has been generated.

The politics of nations has rippled into the mindsets of educators, which can only lead to a fracturing of relationships that benefit all of us – especially our next generation of Australians.

Education has an important role to play in addressing this.

Education should be offering opportunities for intercultural learning to navigate these challenging times. It requires educators to a utilise a combination of the curriculum, context, and communication. However, the challenges go deeper, with issues raised last year highlighting the "politicisation of teaching Chinese language in Australian classrooms today".

Australia doesn’t get to change its geography – we seem to constantly forget we are in the Asia-Pacific. As Parag Khanna so aptly put it in his book The Future is Asian, “The more Asian Australia becomes, the less it can think of itself – and the less we should think of it – as a detached outpost of the West in Asia”. 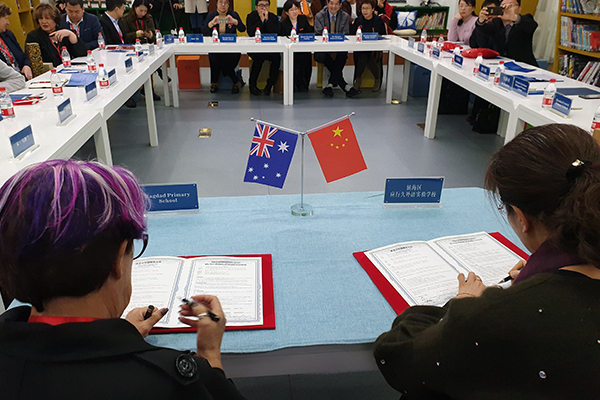 Australia’s place in the Asia-Pacific is reflected in the faces of our society and in our students. In schools across Victoria and NSW, Mandarin is one of the most commonly spoken languages other than English at home.

Chinese migrants first came to Australia over 200 years ago. Furthermore, it has been contested that Chinese exploration of Australia began in the 15th century. Yet the history taught in our schools often relegates Chinese-Australian studies to the Gold Rush of the 1850s. The New York Times put this   neatly into context with its 2018 story "200 Years On, Chinese-Australians Are Still Proving They Belong".

History allows us to challenge intercultural assumptions, like reminding learners that there were Chinese ANZACs or highlighting the Asian-Australians who have shaped our nation.

The contemporary history of China is becoming increasingly complex for many outside China to understand. There are concerns around Chinese territorial claims in the South-China Sea, pressures exerted on Hong Kong and Chinese Taipei (Taiwan) and questions about China’s compliance with world trade organisation rules. The rollout of China’s Belt and Road Initiative (BRI) is re-shaping the world’s infrastructure and relationships.

It should be an important part of our education to understand more about the trillion-dollar BRI, including how it links to earlier grand national infrastructure plans like the ancient Silk Roads or to draw similarities to the Post-WW II Marshall Plan for the reconstruction of Europe.

This is where schools come in.

Only recently I was facilitating an online workshop with 50 educators from the Yinhu Academy in Hangzhou on intercultural understanding. They demonstrated impressive efforts and keenness to develop greater global competence, critical thinking, and communication. They described engaging their students in debates on world affairs, on ways to foster harmony, and the importance of teaching a bilingual curriculum. The enthusiasm for collaboration and two-way engagement is certainly there in China’s schools.

Stanley Wang, Principal at Abbotsford Primary School in Melbourne was the recent winner in the Education category in the prestigious 2021 40 Under 40 Asian-Australian Leaders.

As the leader of a bilingual Chinese school, Stanley acknowledged that; "We have actually leveraged the opportunity (of COVID-19) to do a lot more small-scale but frequent dosages of online interaction between students from our school and other Chinese-speaking regions.

"That has been very powerful for the students because they aren’t just preparing for that one-off burst of excitement, but actually seeing that this is about relationship building, too." The Australian Curriculum is designed to encourage critical thinking and ethical understanding. The aim is to further develop respect, empathy and reflection through intercultural understanding. Helping learners appreciate that the world is complex helps address stereotyping and more extreme prejudices.

Improving our China-literacy requires at least three things – knowledge, skills, and attitude. Through the intercultural learning within AEF programs, learners recognise the cultural lenses of their own mindset and the emphasis we each place on notions such as status and relationships. At AEF, we want to build skillsets through sustained reciprocal engagement with countries such as China, using respect and empathy to achieve shared resolutions for education.

There needs to be more emphasis in Australian school education on the things that connect us than the differences that separate us, and even more work on the role of cultural sensitivity. These would go a long way in helping educators and students to examine the assumptions around China and develop empathy for Chinese people.

I’m convinced that education is best placedto help usnavigate the misunderstandings and suspicions regarding China and Chinese people. The need for knowledge and understanding is more important today than ever.

Learning to understand ourselves through others is at the heart of intercultural learning.

Hamish Curry is the Executive Director of the Asia Education Foundation at Asialink, the University of Melbourne.

This article originally appeared on the University of Melbourne's Pursuit on October 5, 2021.