Without Indonesian language skills and intercultural capability, Australians will struggle to navigate their relationship with one of Asia’s key players, writes Hamish Curry, Executive Director of the Asia Education Foundation.

Over the past two decades, the story of Indonesian language learning in Australian schools has been one of gradual decline.

If current trends continue, Bahasa Indonesia in Australian schools will experience an irreversible crisis – caught between some positive efforts in primary schools and ever-dwindling student numbers in the secondary years.

Without nation-wide policies, consistent data, funding and collective support, Indonesian could be relegated to a forgotten corner of our education experiences.

Indonesia is Australia’s nearest Asian neighbour, a key player in Southeast Asia, a member of the G20 and an emerging economic force in business, technology and education.

Australian and Indonesian education systems share a similar focus on curriculum skills in critical and creative thinking, communication, and collaboration.

Coupled with a surge in the need for teacher capacity-building in teaching with technology, the wider opportunities for educators to work together across both nations on teaching practices and curriculum development are exciting and should be amplified to benefit both countries. 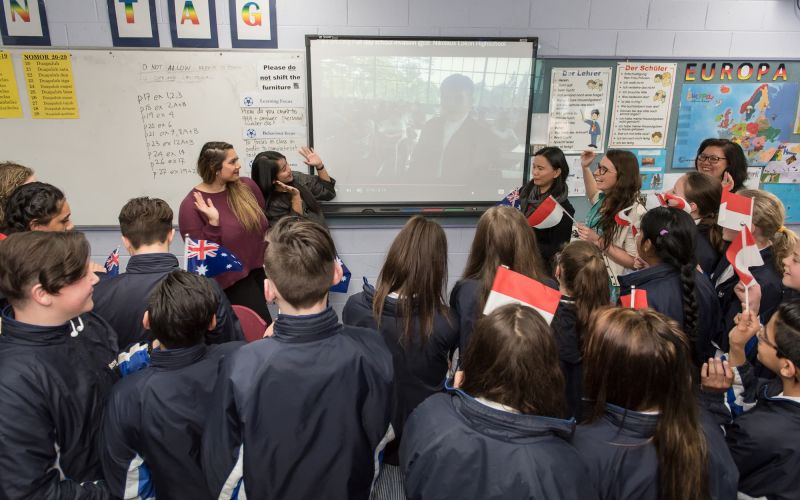 Since 2013, with the end of National Asian Languages and Studies in Schools Program (2008–2012), education in Australia has seen a period of decline in national languages funding, professional development and policy support.

In 2019 the Australian Federation of Modern Language Teachers Association (AFMLTA) received funding from the Federal Government to commence research and make recommendations on all languages across Australian education, with outcomes expected by 2022.

In the meantime, Indonesian language learning continues to slip away. Without the language skills, knowledge of Indonesia, and intercultural capability, Australians will struggle to navigate their relationship with one of Asia’s key players and the world’s largest Muslim population.

Indonesian has already been on the chopping block for several prominent Australian universities, with media and public pressure appearing, for now, to stave off the inevitable.

But we are missing an opportunity as there are three things we could be doing right now to stem this decline.

1. Regularly collect, analyse and report on data on Indonesian language and studies across Australian schools to inform progress and planning

Almost nothing is known about what students learn, if anything, about Indonesia through other areas of their education. Schools need greater support in moving beyond the common cultural ‘F-words’ of engagement: food, flags, festivals, and fashion.

The level of teacher awareness and competence with Indonesian is a central element in raising study participation, however, the latest Lowy Institute poll suggests that Australians generally have a limited understanding of Indonesia and low trust in its leaders.

The ‘cliff’ between primary and secondary school participation in Indonesian is particularly pronounced and clearly contributes to a lack of senior secondary students learning the language. Very little is known about why and how students choose and continue languages over time, taking into account that languages become optional after Year 8 in most states and territories.

Primary schools make up the overwhelming bulk of students learning Indonesian in Australia. However, there are now far fewer pathways for students to follow the language into their secondary education. It is at the junior secondary level that more investigation and intervention need to take place. Figure 1: Australian students enrolled in studying Indonesian, comparing the national differences (all States and the ACT) between 2009 and 2016. Kohler, M. Indonesian language education in Australia: Patterns of provision and contending ideologies (2020)

The most consistent measure of numbers of students studying Indonesian over the past decade has been the proportion of Year 12 students who study the language. Worryingly, since 2006, Year 12 enrolments have halved.

Indonesian appears to be one of the few languages that has declined quite so significantly in the last decade. Due to a lack of clearer data, there are few comprehensive explanations as to why.

Despite the gloom, there are pockets of excellence where Australian schools show successful engagement and participation with Indonesia and Indonesian. Asia Education Foundation (AEF) initiatives like the BRIDGE School Partnerships program have directly linked schools in Australia and Indonesia since 2008.

Time and again stories affirm that investing in school partnerships and student experiences with Indonesia offer long-lasting impact on learning and intercultural understanding. By 2021-2022, BRIDGE will have established over 200 partnerships across Australia with 18 provinces in Indonesia.

The stories of impact have been numerous over the years with teachers exploring everything from science and sustainability projects, to shared storytelling and recipe books, diverse arts, and traditional practices.

Even during the pandemic in 2020, schools continued their connections in even greater numbers. Hundreds of teachers from Indonesia joined AEF webinars to share remote teaching practices and wellbeing support with their Australian peers.

Another successful intervention has been the use of Indonesian nationals studying education in Australian universities with the opportunity to spend time in a school assisting the teaching of language and culture.

AEF’s Indonesian Language Learning Ambassadors (ILLA) from 2017-2019 showed strong feedback on its impact. Some 89 per cent of teachers stated that their students were more motivated to continue their Indonesian language studies. The Australian Capital Territory also uses a similar model and happens to one of the few education systems showing a small positive trend in Indonesian.

A final consideration on the myriad of ways education can blend between Indonesia and Australia is through the support of other organisations. There’s the Australia-Indonesia Youth Association (AIYA) and the National Australia-Indonesia Language Awards (NAILA) that have both continued to foster communication and language exchange opportunities and awards across education.

There’s also the Australian Consortium for ‘In-Country’ Indonesian Studies (ACICS) that is now offering a series of digital services and programs.

The future of Indonesian study

For 2021, the Australia-Indonesia Institute has funded AEF to develop a contemporary rationale for studies of Indonesia and Indonesian language at this crucial juncture.

The AEF will consult as widely as possible to capture a diverse range of experienced, youthful, and passionate voices to articulate a strong and relevant rationale for Australian schools. The rationale for ‘Why Study Indonesian?’ will be launched in October this year.

A rationale that speaks to Australian schools on its own won’t have the impact of national or state policies or funding, but it will be an important first step. It can demonstrate to communities in Australia and Indonesia, that Indonesian language and studies are considered an important and essential offering in Australian education, and one that must be strengthened nationally and systemically.

This article is also available in Bahasa Indonesia here.

The AEF podcast ‘Building BRIDGES’ features some detailed conversation with school leaders about how they have fostered Indonesian language, studies, and networks.

This article originally appeared on the AEF website and was also published by the University of Melbourne's Pursuit.

Funding Acknowledgement: Why Study Indonesian? A Rationale for Australian Education, has received grant funding from the Australia-Indonesia Institute of the Department of Foreign Affairs and Trade.

Visit the Asia Education Foundation site to read more about the AEF's new 'Why Study Indonesian? A Rationale for Australian Education' survey and research, developed with support from the Australia-Indonesia Institute at the Department of Foreign Affairs and Trade.