From around the world, and across Australia, it is becoming increasingly clear to many in education that young people need to "...understand their responsibilities as global citizens and know how to affect positive change." This goal doesn’t come from a global organisation like the OECD or UNESCO, but from Australia’s own national education goals, the Mparntwe Education Declaration, agreed to by all State and Territory Ministers of Education in 2019.

The Mparntwe Declaration sets a vision for equity and excellence in Australian education for the next decade. While there are still many hurdles to overcome in achieving this vision, the latest report from the OECD on the 2018 PISA tests on Global Competence should give Australia some confidence in stepping towards this.

Every three years the OECD conducts global tests  known as the Programme for International Student Assessment (PISA). These usually test reading, mathematics and science; across 79 nations, with over 600,000 15-year-olds. PISA has become the defining global measure of the effectiveness of education systems  and has a significant influence on shaping education policy in Australia and other countries.

PISA has now introduced tests to explore previously challenging and complex areas of learning. In 2015 it was collaborative problem-solving; in 2018 global competence. In 2022 we will see creative thinking tested by PISA.

The OECD chose these areas because they consider them essential capabilities to cultivating life long  and effective learners in today’s world. To add further weight to this shift from testing knowledge to assessing skills and attitudes, the US Brookings Institution recently released data on which countries around the world are pursuing these ‘Competencies for the 21st Century’. Not surprisingly, among the most active are the high performing countries in our own region: Singapore, Hong Kong, China and South Korea. The OECD has comprehensively detailed the data and measures on global competence through their report, aptly titled ‘Are students ready to thrive in an interconnected world?’

While participation in this test was voluntary for OECD nations, 27 took up the full version of the cognitive test and student questionnaire, and a further 39 took up the questionnaire; including Australia. This came as a surprise. The AEF had tried to track down students who had participated in the Global Competence test and was told by many jurisdictions that they did not participate. Given that the 2018 PISA was administered to about 14,000 Australian students (across 750 schools) it appears now that the questionnaire was completed by many.

For 426 pages of data and interpretation there’s not enough room to unpack everything here. That’s why we’re hosting a webinar discussion on this PISA Report next Thursday 5 November, and we’ll be delving into analysis of the wider global results in activities to come.

The test was built around the OECD’s framework on the four dimensions of Global Competence. A couple of highlights in the Report jump out. Overall, Australia scored very highly, well-above the OECD average in many categories.

“Students in Australia… reported the most positive attitudes towards immigrants, with values in the index that were significantly higher than the OECD average.” Australian students also scored very high on their “self-efficacy regarding global issues and their awareness of global issues.” Importantly, Australian students showed above average “respect for people from other cultures” and their “interest in learning about other cultures”. 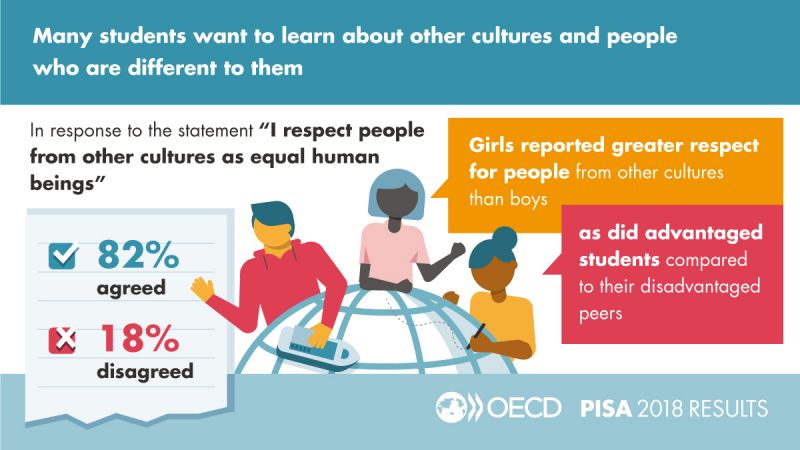 These really interesting outcomes from the Report reinforce our understanding of Australia as a multicultural nation, our close relationships with the Asia-Pacific region, the respect and awareness cultivated in schools, and the growing ethnic diversity of Australian school communities. They are critically important for Australia’s future.

However, it was not all in Australia’s favour, with students underperforming in their ability to speak foreign languages. The OECD data reinforces the relationship between learning a language and your openness to connect and understand the world around you. “The largest proportion of students (more than 20 per cent) who reported that they do not learn any foreign languages was observed in Australia…” This glaring decline in languages education in Australia has been happening over the past two decades, with few system interventions to reverse the trend.

A further concerning pattern surfaced in the data related to equity. “Advantaged students have access to more learning opportunities than disadvantaged students.” Some of the “largest gaps in the index of cognitive adaptability related to socio-economic status were observed in Australia…” indicating that while Australia may have signs of excellence, we have a long road ahead on equity in education.

Global competence and intercultural learning are part of the Australian Curriculum. They are embedded in General Capabilities, Key Learning Areas, and Cross-curriculum priorities. ACARA is currently conducting a full review of the curriculum across these domains, with the intention of refining how schools balance the broad range of learning they offer their students.

Some may think that a focus on global competence is a distraction from the need for greater literacy and numeracy. Such narrow, selective perspectives ignore the interconnected world we live in and ways in which meaningful, relevant and contextual education works in tandem with foundational elements like literacy and numeracy.

As the OECD points out, “global citizens regard planet Earth as our common home.” If 2020 has demonstrated one thing, it is that our shared humanity and empathy at local, national, and global levels is what we need right now, more than ever.

A version of this article was originally published on the AEF website.