Business as usual: Australia-Indonesia relations ‘back on track’ 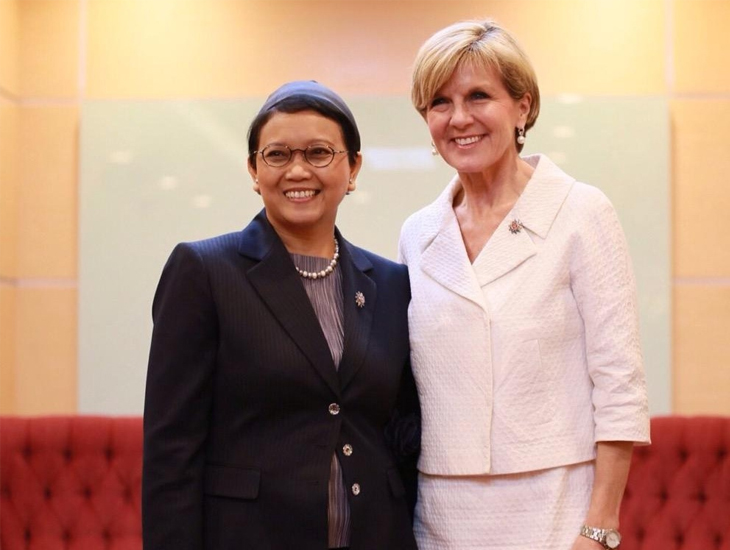 Another episode in a turbulent relationship unfolded last week in Kuala Lumpur. The foreign ministers of Australia and Indonesia met in a signal that diplomatic relations have resumed. Julie Bishop and Retno Marsudi held talks on the sidelines of the ASEAN ministerial meetings, at one point dismissing advisors and other members of their delegations to speak one-on-one, and then advised the media that ‘the relationship is strong’.

This follows the return in early June of the Australian ambassador to Indonesia, Paul Grigson, to Jakarta after his withdrawal over the Bali executions in April.

The meeting between Ms Bishop and Ms Retno has been interpreted in the news media as signifying the resumption of ‘normal’ diplomatic relations.

The perception is that tensions have eased somewhat and that ongoing issues, such as asylum seekers and the live cattle trade, and opportunities such as investment and trade deals can continue to be negotiated.

One might ask whether such diplomatic withdrawals make any real difference to the relationship. And there is understandable public scepticism about their impact on fraught issues, such as the executions or the spying scandal (which led to Jakarta withdrawing its ambassador to Australia in November 2013).  Recalling an ambassador is a signal of a government’s position on a particular issue. But the Australian and Indonesian governments would both know in these situations that relations will not be irreparably damaged.

The Australia-Indonesia relationship is characterised by peaks and troughs, and individual issues or crisis points will not fundamentally undermine the relationship. What is more notable at present is the orientation and priorities of each state’s leadership at particular points in time. The somewhat inward-looking nature of the Jokowi administration (relative to that of his predecessor SBY) is a potential hindrance to progress in the bilateral relationship. And the potential for greater cooperation in regard to asylum seekers is driven more by the Abbott government’s sale of its policy on boat ‘turn-backs’ to his domestic constituency, than by the diplomatic hiccups with Indonesia.

Even focusing on these matters belies a more fundamental feature of the relationship. As Bishop has pointed out, the two governments work on a range of issues and opportunities across a number of ministries. There are bilateral cooperation efforts underway in defence (e.g. military exercises and counterterrorism), trade, investment, education, cultural exchange and many other areas. But there is a tendency to overlook the breadth of bilateral engagement when high profile, emotive events such as the executions occur. No matter how shocking such events might be, they are unlikely to derail what is a more comprehensive relationship than most Australians and Indonesians probably realise.

As such, the meeting of Julie Bishop and Retno Marsudi is, in a sense, business as usual. What will be really interesting is whether the complex relationship underlying the inevitable peaks and troughs strengthens or weakens over the longer term.