A true test of Turnbull’s diplomacy is yet to come 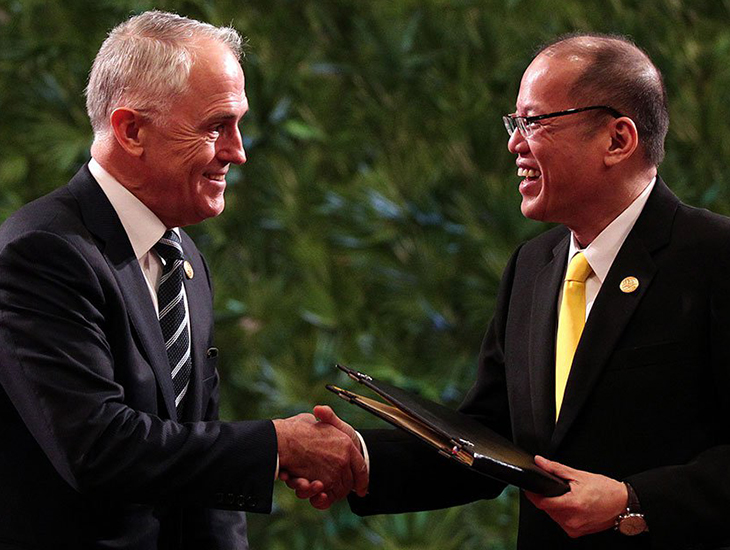 For new and untested leaders on the international stage, being seen as a ‘safe pair of hands’ is one of the highest compliments that can be conferred on to them by nervous diplomats. In the case of Prime Minister Malcolm Turnbull, his performance abroad in November which included visits to Indonesia and Germany, attendance at the G20 meeting in Turkey, the Asia Pacific Economic Cooperation gathering in the Philippines, and the East Asia Summit in Malaysia will have bureaucrats in Canberra breathing a little easier.

To be sure, he caused a few diplomatic hearts to skip a beat when he gave a rambling answer to the spiked question of whether Sunni-groups associated with Daesh ought to be part of a power sharing deal in Syria on the sidelines of APEC when a more experienced hand would have left it well alone given Australia has little say on this issue. But he otherwise stayed convincingly on message and looked the part when rubbing shoulders with the most powerful leaders in the world.

Even so, Turnbull will have learnt two lessons. The first is that Australia tends to be an agenda taker rather than maker when it comes to regional and global affairs, even if how we respond matters a great deal. The second is that greater diplomatic challenges arising out of the region are yet to come and Turnbull has not really been tested even if this is hardly the Prime Minister’s fault.

Let’s begin with the reality that events tend to overtake even the most articulately expressed thoughts. Prior to and just after Turnbull became leader, he was at his most compelling, emphasising the disruptive factors that could leave the region vulnerable: the ageing of populations in countries such as China, Japan, South Korea, Singapore, Thailand and Vietnam; and game-changing technologies such as automation, robotics and 3D printing to name two.

According to Turnbull, Australia and the region has to respond creatively to these disruptions and benefit, or else face the consequences of standing still.

As his background in start-ups and investment banking taught him, winners and losers are ever-changing and never permanent.

Yet, events overtook everything else. After the terrorist attacks in Paris on November 13th, combating Daesh and Islamic extremism understandably dominated all discussion. Talking about opportunistic approaches to economic and social disruption would have appeared indulgent and out of place. In short, Turnbull’s entrepreneurial view of leadership and responsiveness will have to be left for another time and another global platform.

Then consider the EAS in Kuala Lumpur. This gathering is fast emerging as the preeminent regional forum for a number of reasons. For one, the EAS has the right membership encompassing all great and relevant powers in the region and without surplus members such as APEC which is becoming unwieldy. Another reason is that the entire region’s great powers, with the exception of China, have adopted the EAS as the preeminent regional forum to discuss awkward and important matters such as security competition – with full acquiescence from the ASEAN states.

Expectations were high that the EAS would elevate tensions in the South China Sea to the top of the agenda, meaning that the elephant in the room would be confronted rather than ignored as is usually the case. Given that Turnbull had admonished Beijing for ‘pushing the envelope’ in its land and reef reclamations activities in the South China Sea in his first television interview on foreign policy when he became Prime Minister, there was high interest in how he would perform and deal with this awkward issue on the regional stage.

The talk of countering terrorism and extremism meant the South China Sea was pushed to one side at the EAS, leaving us no more enlightened about how deftly and effectively the Prime Minister will handle this difficult bit of diplomacy in the region.

Nevertheless, we can be reassured that the United States navy will conduct another Freedom of Navigation operation in the area, as it did near Subi Reef on October 27. And the Turnbull government will be expected to offer diplomatic comment and a response – with Washington and Beijing watching intently to see what Turnbull says. More vexed will be if the U.S. formally requests the Australian Navy to join the next such Freedom of Navigation operation whenever that will be.

That would be a true test of Turnbull’s handle on diplomacy and foreign policy.