The Hong Kong protests have Xi Jinping in a bind. For all the talk of China’s power and the power of the president-for-life within China, he has faced no good choices in the Hong Kong crisis. Whatever the outcome, whatever action Xi takes to try to end a standoff now entering its fourth month, China looks like suffering a significant loss.

Two broad and diametrically opposed scenarios are available to Xi and a government in Hong Kong that it appears he has dictated to throughout the crisis: either pursue an escalating strategy of coercion that results in heightened confrontation with protestors, and possibly serious bloodshed, or seek an accommodation with them.

The best case for Xi is that the protestors tire, and in the case of the young, return to their studies. After another weekend of clashes that saw barricades on fire in Hong Kong Island’s central business district and protestors launch attacks on the police headquarters, this seems an unlikely rescue. 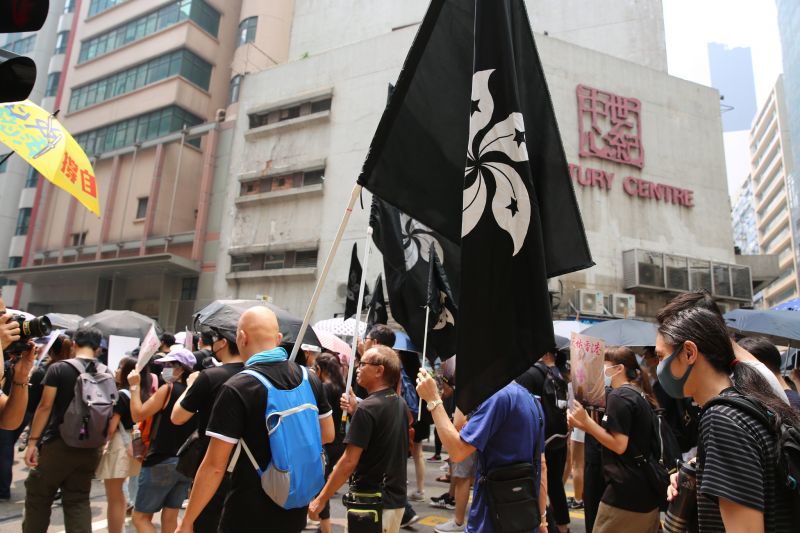 If Xi does decide to employ the first scenario, he risks doing considerable, and perhaps permanent, damage to an important range of interests associated with the ‘one country, two systems’ formula that has set the framework for rule in Hong Kong since the British departed in 1997.

If he adopts the second scenario, he risks undermining the stature of his leadership and emboldening a range of forces in mainland China, Hong Kong and elsewhere who object to the increasingly heavy-handed approach taken by the Chinese Communist Party since Xi assumed the leadership in 2013. This could be an ‘emperor has no clothes’ moment; the youth of little Hong Kong standing up and showing Chinese state power to be wanting.

So, either way—coercion or compromise—Xi’s options for a way out look unattractive. All have deleterious consequences.

One thing seems clear. It is Xi who is setting China’s strategy. Next to the trade dispute with the US, it’s hard to think of another issue that could occupy his mind right now as much as Hong Kong.

On the other side, the combination of mass peaceful marches, blockades of public facilities and street confrontations since June has severely tested the mettle and capability of authorities. With calculated disruptions, like the closure of the Hong Kong airport terminal, it has struck directly at the lodestone of Hong Kong life—its vibrant, free-wheeling economy—and stretched the resources of the police.

In the process, the confidence of protestors has grown. They have moved beyond opposing an extradition law to reviving a call for genuine democracy. They want accountability in the form of the resignation of Hong Kong chief executive Carrie Lam and an investigation into police conduct. They also demand the implementation of long-promised direct elections for their government based on a fully democratic franchise. Despite the arrest in recent days of some prominent protest leaders and democrats, they can reasonably calculate that political opportunity for the moment is with them. This raises the bar for a resolution.

In the meantime, Chinese paramilitary police perform mock riot-suppression exercises across the border, stirring fears that mainland forces could join in a security crackdown. It’s possible these displays of force are no more than an act of intimidation, a case of what Mao Zedong referred to as ‘draw the bow, but not discharge the arrow’.

Xi does have at his command a state apparatus with long experience of strategies to coerce and co-opt opponents. He can employ a combination of inducements, propaganda, psychological intimidation, arm-twisting of opinion leaders, and physical suppression of protestors.

In the event he does decide to use force, he could invoke Article 18 of the Basic Law, Hong Kong’s constitution, which gives Beijing the power to declare a state of emergency and impose China’s national laws to deal with any threat to ‘national unity or security [that] is beyond the control of the government’ of Hong Kong.

Since the crisis erupted, it has been widely suggested that Hong Kong is of declining relevance to the Chinese economy.

There’s a lot of truth in that. But it needs to be qualified. Hong Kong, either as a trading or financial hub, has an enormous role to play in maintaining China’s economic health.

Because of the size of its re-exports and own consumption, Hong Kong is the fourth biggest trading partner with the mainland after the US, Japan and South Korea. It is the largest source (or gateway) for overseas direct investment in the mainland, accounting for a cumulative US$1.09 trillion in capital inflow in 2018. Of all overseas-funded projects in the mainland, 46.3% were tied to Hong Kong interests.

The local economy was already slowing sharply before the onset of the protests, caught in the midst of the US–China trade dispute. It now risks slipping into recession. A summary of the economic fallout shows steep declines in many of the traditional drivers of growth.

Even without a brutal repression of the protests, the damage is probably done. It’s hard to see confidence in Hong Kong being quite the same, especially as it gets closer to the end of the one country, two systems guarantee in 2047. Property, rated among the least affordable in the world, might start to increasingly suffer a ‘2047 discount’. The pattern of Hong Kongers taking out precautionary residency abroad, as they did in the lead-up to 1997, might resume, depriving the territory of some of its best brains and entrepreneurial talent.

The 3,955 foreign companies that currently use Hong Kong as a regional headquarters or representative office location (85 of them Australian) may choose to rethink their presence. A number of them already are considering a move to places like Singapore. They will be troubled by the resignation of Cathay Pacific’s chief executive following threats from Beijing over the consequences for the airline of allowing its employees to support protest activities.

China’s relations with Taiwan are another casualty. This time last year Beijing looked like securing a win in cross-strait relations with the election of a president more sympathetic to reunification. In the wake of the extradition law fiasco, the popularity of the Democratic Progressive Party’s Tsai Ing-wen has soared, establishing her as the favorite to be returned in January elections.

Of course, significant violence would make things much worse. But a political accommodation also looks like a hard act for Xi to pull off.

If Beijing were to authorise a dialogue between the Hong Kong government and the democrats and protestors, it might encourage critics to question the Chinese leadership’s competence or omnipotence. If a small place like Hong Kong, its sovereign territory, can stand up to Beijing’s authority and win concessions, how would that be interpreted in other restive parts of the country, or among regional countries that have their own disputes with China?

The same set of facts could be interpreted another way. China could portray dialogue, a willingness to listen to and act on some of the grievances of the protestors, as proof of its confidence as a great power as it prepares to celebrate 70 years of the People’s Republic in October.

Rather than turn Hong Kong into another running sore like Xinjiang, Xi could choose to uphold the spirit and substance of one country, two systems with the same pragmatism as the father of modern China, Deng Xiaoping. A tactical retreat would potentially allow him to adopt the high moral ground in his widening trade conflict with Donald Trump.

Right now, it’s hard to see that happening. The room for compromise has diminished. The Hong Kong crisis is unlikely to end well for any interested party—the Chinese leadership, the people and government of Hong Kong, and foreign countries with material interests there, not to mention the half a million Hong Kong residents who are citizens of Western countries.

Donald Greenlees is senior adviser to Asialink at the University of Melbourne and a visiting fellow at the Strategic and Defence Studies Centre at the Australian National University.