Despite the sound and fury over Taiwan, the risk of war remains low, writes Colin Heseltine.

The ill-advised recent visit by Nancy Pelosi to Taiwan has, if nothing else, produced a torrent of commentary on China’s future intentions regarding Taiwan. But as to what these really are clarity is still lacking. A recurring theme is, has the fallout from the visit increased the likelihood of China taking Taiwan by force?

China’s immediate response to the visit, involving an unprecedented intensity of military drills around Taiwan, produced both positive and negative outcomes for China. It most likely will have achieved its main aim of deterring any future such high-level US visits to Taiwan . But the excessive show of military intimidation towards Taiwan laid bare the stark nature of its options; and the United States will maintain its resolve to support Taiwan, including through new arms sales. In the Asian region, while most countries will avoid openly criticising China, many will be more willing to see the US maintain its security role in the region.

There is no doubt that China was prepared for an event such as the US House Speaker’s visit: its immediate mobilisation of large-scale military drills demonstrates this clearly. While the size and nature of the drills, over several days, was over-the-top, their clear aim was deterrence, to ensure that no such future incidents occur. But there is no reason, despite all the sound and fury to believe that a forceful takeover of Taiwan by China is now more likely to happen. Despite the show of force, China did exercise a measure of self-control, and Taiwan itself sensibly avoided any provocative countermeasures. 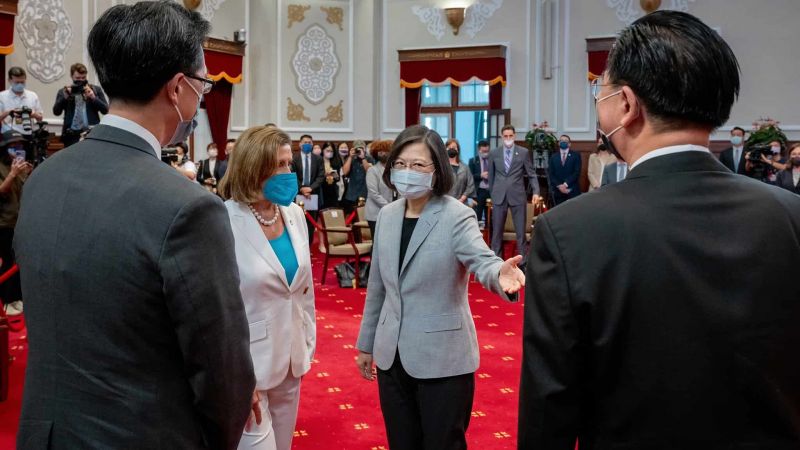 The purpose of intimidation is to have people fear that military action will be used to force them to change their behaviour, and, in Taiwan’s case, for it to capitulate to China’s demands for reunification. The question then becomes, are China’s threats credible?

There are many reasons to believe that the last thing China wants is a war with the United States over Taiwan. Many wargaming exercises have been conducted indicating that one side or the other could prevail in such a conflict. The fact is that China cannot be confident it would win a war over Taiwan.  Moreover, no matter what the outcome, the consequences would be catastrophic for everyone.  China would suffer massive economic consequences as international sanctions were introduced. The global economic fallout arising from the Russian invasion of Ukraine would pale by comparison.  Xi Jinping’s “China Dream” would be shattered, as would any hope of securing an environment of peace and stability in the Asian region. Japan, which has clear security interests in Taiwan’s future, would most likely become involved.

China would have to pick up the pieces of a war-ravaged Taiwan, and face the lasting hostility of a population, accustomed to freedom and who overwhelmingly don’t want to be part of China. The image of Chinese killing other Chinese – not seen in military conflict since the Chinese civil war ended in 1949 – would have negative consequences around the world, especially among the Chinese diaspora, and very possibly within China itself.

While many observers like to portray Xi as a risk taker, evidence suggests he is very considered and strategic. Unlike Russia’s Putin, he is highly unlikely to engage in reckless military activities, the outcomes of which he cannot be certain. Risking a war between two major nuclear powers (a first) is unlikely to be part of Xi’s strategic thinking. Apart from the Korean war (1950-53), and the short 1979 war against Vietnam, the PRC has avoided large scale military conflict. The maxim of ancient Chinese strategist Sun Tzu  to subdue an enemy without fighting seems still to permeate China’s strategic thinking.

Given China’s recent ramping up of its claim to Taiwan, does China have other options to achieve a peaceful face-saving outcome?  Its efforts to promote a Hong Kong-style “one China, two systems” for Taiwan are unacceptable to Taiwan, even more so since the recent crackdown in Hong Kong.

The best outcome is undoubtedly to continue with the current, somewhat bruised, status quo approach in which Taiwan avoids any moves towards independence.  It is noteworthy that Taiwan has handled the fallout from Pelosi’s visit with calm stoicism, carefully avoiding anything to inflame the situation.  As the party with most to lose, it will continue this approach.

It is unlikely China will do anything to risk military conflict over Taiwan in the leadup to the 20th Chinese Communist Party Congress in November, when Xi is expected to secure another five-year term. He doesn’t need a crisis now. Some observers speculate, however, that after he has achieved what he wants at the Congress, he will feel emboldened to take a more aggressive approach to Taiwan.

But, against this line of thinking, the catastrophic risks from a military conflict with the United States, mentioned above, will still apply after the Congress. Faced with the unthinkable consequences of military conflict, it is not absurdly optimistic to speculate that China may move back to an approach emphasising peaceful unification in order to achieve some kind of face-saving modus vivendi with Taiwan. China may be prepared, having made a point over the Pelosi visit, to allow the status quo, such as it is, to continue.  Its rhetoric over the sacred cause of reuniting Taiwan will not change, but it can moderate its actions and language.

It might even not be too late to try to restore a modicum of the more positive cross strait relations we have seen in the past.  Interestingly, a White Paper on Taiwan issued by China while the military drills were still under way focused at length on peaceful unification and downplayed the option to use force.

Meanwhile, other countries would be well-advised to avoid disrupting the status quo with unnecessary provocations. That said, it is important for them to continue to support the status quo, and Taiwan, in much the same way as they have in recent decades. Australia can, in a non-disruptive way, continue to support its economic relationship with Taiwan. Two steps to enhance this would be to resume the practice of occasional visits by a non-cabinet level economic minister, and the negotiation of a free trade agreement.

A version of this article originally appeared in The Australian ($) on August 19, 2022.