The Biden administration has reversed many of the less palatable foreign policy features of the Trump era, notably by restoring the status of allies. Brad Nelson assesses five key themes in the Biden foreign policy and identifies some policy risks – especially in the Indo-Pacific.

President Joe Biden has been in office a little more than six months. He now has a nascent empirical record as president, a file of data that we can begin to make sense of and assess. In this short time, five main foreign affairs themes stand out.

First, Biden campaigned on a set of issues, including the importance of democracy, international institutions, human rights, climate change, and American alliances, and those same issues continue to animate his presidency. These issues are consequential to Biden in part because they are central to his liberal international worldview that prizes cooperation, liberal ideas, the protection of civil and political liberties, and soft power. As a result, Biden entered the White House on a mission to elevate and strengthen America’s commitment to a basket of liberal issues that he believes were wrongly overlooked, if not outright demonised, by his predecessor.

Second, that said, there has been in many respects remarkable foreign policy consistency from Trump to Biden. It’s one of the underreported themes of the first six months of the Biden presidency. Undoubtedly, unlike Trump, Biden has emphasised returning the US to a global leadership position and resurrecting liberal ideas and institutions at the heart American foreign policy. But once we get past those issues and look elsewhere, there is considerable overlap between Trump and Biden, on issues like standing firm on Iran and China, controlling immigration from Central America, ending the war in Afghanistan, and pursuing better relations with Putin’s Russia. This is despite Biden’s campaign bluster about shifting US foreign policy away from Trump’s “America First” program.

Third, the administration has clearly prioritised Europe and the Indo-Pacific. Europe is important because that’s where Russia, a great power competitor to the US, and a number of America’s liberal allies are located. Maintaining an effective counterbalancing coalition is key as long as Russia continues to cause trouble in its “near abroad”, condones and engages in cyberattacks, frightens Europeans like the Baltic nations, and attempts to undermine US global interests.

Arguably, the Indo-Pacific is even more important to Biden, primarily because that’s the venue of the world’s most intense security problems today and likely well into the future. After all, China’s continued growth and increasing assertiveness, North Korea’s nuclear arsenal, the fate of Taiwan, and the construction of a cohesive, strong coalition to deter China — in a region that lacks a formal NATO-like security body — dominate the attention of Team Biden.

That has been reflected in the team’s travel plans. Secretary of State Antony Blinken has visited South Korea, Japan and India, and met Chinese officials in Alaska. Secretary of Defense Lloyd Austin last week visited Singapore, Vietnam, and the Philippines. Deputy Secretary of State Wendy Sherman is back from a recent visit to China, Japan, South Korea, and Mongolia, and travelled to parts of Southeast Asia, including Indonesia, in late May. Both Biden and Blinken have held meetings with members of the Quad – Australia, India and Japan.

America’s Indo-Pacific policy mostly hinges on a two-pronged approach to China – working with it on issues of mutual interest, such as climate change and global financial stability, when possible, and pushing back against it on human rights violations, its regional adventurism and its economic malpractices. Of course, the rub is that China sees American rhetoric and policies as internal meddling and attempts at containment.

Fourth, it’s reasonable to wonder how the Biden administration presently views Southeast Asia. The President is yet to speak by phone to any Southeast Asian head of government. Last week’s visit by Austin — the first by a member of the cabinet — suggests that the Biden administration might be waking up to the region’s importance. In Singapore, Austin emphasised America’s “enduring ties in Southeast Asia are bigger than just geopolitics”. He also declared that Washington was “not asking countries in the region to choose between the United States and China”, embracing the publicly voiced concern of Singapore Prime Minister Lee Hsien Loong. 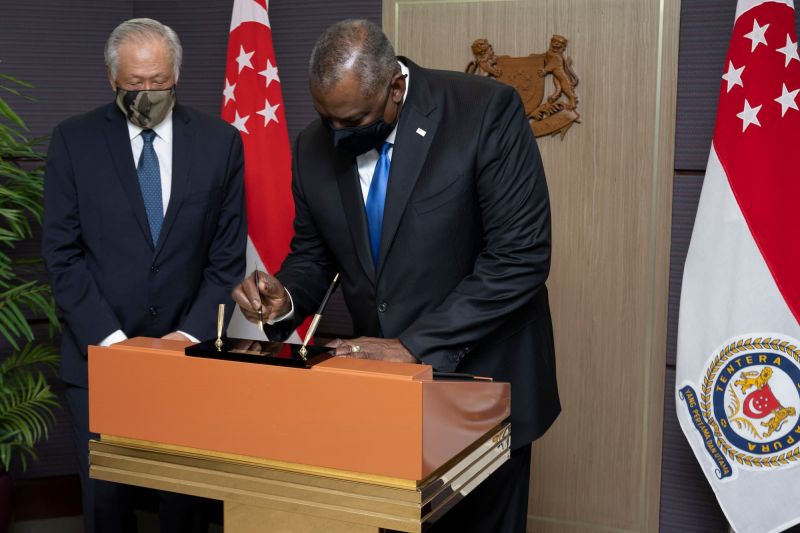 Still, some analysts say governments in the region are prone to believe America sees Southeast Asia, and ASEAN in particular, almost solely through the lens of the China threat. Regardless of whether that’s the reality of the situation, perception is reality. The region, in general, thinks that the relationship with the US isn’t being fully cultivated and developed and that it’s not receiving the respect it deserves.

The administration’s point man on the Indo-Pacific, Kurt Campbell, has acknowledged the US needs an economic vision for the region without which “it's hard to be successful”. But it is consequential to note that Biden's first major outreach to Southeast Asia was not via economic issues and agreements like the Trans-Pacific Partnership of the Obama era. Perhaps sensing the American populist economic mood against foreign trade deals, Biden has for now tabled talk about such topics.

Biden appears to view Southeast Asia primarily through the lens of security and military affairs. Relatedly, it is noteworthy to point out that Austin's main achievement during his visit was to re-secure the Visiting Forces Agreement with the Philippines. There are risks with this kind of an approach. Put simply, well-intentioned efforts by the US to securitise and militarise the region could well provoke hostility and conflict spirals with Beijing and alienate some potential partners over the long-term.

Fifth, it’s still possible the Middle East could block Biden’s plans for the Indo-Pacific. The US has wanted to more fully focus on Asia, China specifically, for almost 15 years now, but it keeps getting sucked back into the Middle East. Yes, Obama had his "Pivot to Asia" and Trump had his "Free and Open Indo-Pacific", but both got bogged down at various times in the Middle East because of various regional events. In a region awash in political instability, extremism, and militancy, the likelihood of conflicts popping up (or re-emerging) over the next three years is unfortunately high. Should that happen, US attention and resources will be redirected, putting the Indo-Pacific’s role in US foreign policy in flux.

At bottom, US foreign policy under Biden has offered encouraging signs. There haven't been any major international crises on Biden’s watch and his team hasn’t committed any serious sins of commission or omission to this point. Biden’s staff and his foreign policy process are highly organised and professional. By highlighting human rights and engaging in a massive global vaccine distribution campaign, he's made US foreign policy a bit kinder and more compassionate. Gone are the days of insults, outbursts, and cavalier statements on Twitter. While I'm not sure that "America is back," as Biden likes to say, its foreign policy does rest on a better foundation today than before January 20.

Prof. Brad Nelson is co-founder and president of Center for World Conflict and Peace and an adjunct professor of international relations at Saint Xavier University. His Twitter is @BNNelson74.