A year on from the enactment of a national security law, the politics of a once freewheeling Hong Kong is undergoing a historic transition. Veteran local political commentator Sonny Lo maps the new political landscape.

One year after the Chinese National People’s Congress (NPC) promulgated a national security law for Hong Kong, the political red lines established by the law and its implementation are clear. In essence, the people of Hong Kong must respect and support the Chinese Communist Party (CCP) and appreciate its contributions to both the socio-economic development of the People’s Republic of China (PRC) and to Hong Kong’s governing formula on the basis of “one country, two systems”. Those Hong Kong people who take action to seek to change the PRC’s political system are bound to encounter tremendous political risks and be accused of violating the national security law.

The red lines can be seen in how the feisty tabloid Apple Daily has been dealt with by Hong Kong authorities. The proprietor, Jimmy Lai, was arrested and imprisoned for participating in an unauthorised assembly in 2019. He was also charged for violating the national security law in December 2020 for “collusion,” evidence of which included some remarks he made on Twitter. Perhaps Lai was too provocative in his open lobbying efforts of US politicians and government officials during and after the 2019 protests against an extradition law. In May, Lai’s assets were frozen by the Hong Kong government.

On 24 June, Apple Daily, founded by Lai in 1995, decided to cease publication. The newspaper’s executives argued this was necessary to protect staff members. Critics of Apple Daily claim the newspaper became highly political, especially from mid 2003 when it played a role in mobilising protests against an earlier security law proposed by the Tung Chee-hwa government. A pro-democracy and anti-corruption sentinel, Apple Daily antagonised many people with its investigations, including government authorities. Critics also point to the presence of two Americans on the newspaper’s corporate board. Given that Apple Daily was not just busy exposing government scandals in Hong Kong and the mainland, but also seen as a political vehicle for the democrats to mobilise supporters to protest at events like the 1 July anniversary of the handover of Hong Kong to the PRC, it was not surprising it became a thorn in the side of PRC authorities. In February, 47 democrats were charged with “conspiracy to commit subversion” because of their involvement in an election ‘primary’ in July 2020, two months before planned Legislative Council (LegCo) elections. The LegCo election was eventually postponed due to COVID-19. The 47 democrats obviously underestimated the reach of the national security law. They took a gamble in attempting to test the tolerance of authorities. Supporters of the democrats might argue they were unaware of the political red lines.

Teachers in secondary schools also are becoming more politically cautious than ever. The Liberal Studies curriculum was revamped by the Hong Kong government and has been replaced by the Citizenship and Social Development Curriculum. Liberal Studies as a subject was heavily criticised for promoting political liberalism and civil liberties and encouraging students to participate in politics actively. Instead, Hong Kong authorities have strengthened national security education, emphasising the importance of instilling an understanding of Chinese culture and history as well as national security in the psyche of students at the primary and secondary levels. Universities are expected to teach national security to undergraduates, most likely during their first year in generic courses.

If teachers, professors and students are adapting gradually and necessarily to the national security law, other sectors of the society are facing the same phenomenon. Hong Kong authorities are focusing national security education on three main sectors: education, media and civil service. For PRC authorities, education reform is a must because the knowledge of Chinese culture, history and national security among Hong Kong’s youth is seen as inadequate. The mass media are expected to observe the national security law because they played a crucial role in mobilising protestors against the extradition bill in the latter half of 2019. After the downfall of Apple Daily, online media are likely to be the next targets of control. As for civil servants, a minority participated in the 2019 protests. They have recently been required to take an oath to uphold the security law.

At least three different responses can be discerned so far among different segments of the Hong Kong population. The first is exit, meaning many Hong Kong people are migrating to other places, such as the UK, Canada and even Taiwan. A minority of political activists in the anti-extradition movement in 2019 have already left Hong Kong. Many Hong Kong families have utilised the British National Overseas passports scheme to apply for emigration to the UK; others are making use of study and investment schemes in Canada. Some, including activists, went to Taiwan, despite tightening immigration requirements aimed at ensuring only genuine long-term applicants are admitted.

The second societal response is apathy. If politics are increasingly dangerous, many citizens find it safer to be silent and apathetic. Political parties and groups have already seen the withdrawal of their members from politics, notably the Civic Party and the Neo-Democrats. This could be reflected in lower turnout in local legislative elections scheduled for December. However, according to the Hong Kong authorities, any local politician or activist who openly appeals to the masses to boycott the local elections could be regarded as violating the security law. If so, non-participation in elections is likely to be low-profile, silent and hidden. 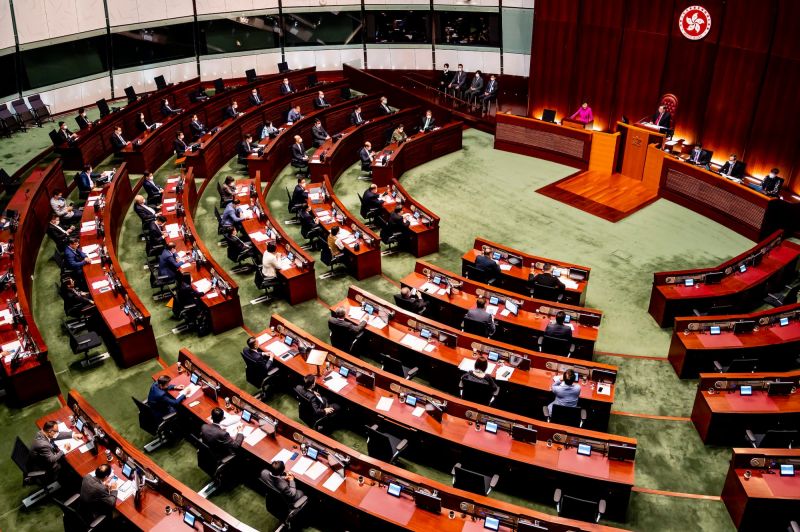 The third response to the security law likely will be to reduce representative politics to a focus on retail issues. The NPC Standing Committee restructured the LegCo to establish a chamber of 90 members after the December election. Forty of them will be selected by a 1,500-member Election Committee, 30 of them from functional constituencies, and 20 of them from direct elections through geographical constituencies. Given that the pro-Beijing and pro-government “patriots” will very likely occupy most of the 40 seats elected from the Election Committee, and most of the 30 functional constituencies, the democrats would be destined to be a permanent minority and weak opposition in the LegCo. The democrats, even if some of them are willing to participate in the election, would be expected to be a loyal opposition. Any disloyal oppositionists will be vulnerable to being sanctioned within the legislature, which has already tightened its rules to deal with dissent, with the prospect of being disqualified by the government.

Still, LegCo will likely be fragmented and divided. Some members will be pro-Beijing and pro-government loyalists; some will tend to be politically opportunistic; some will tend to fight for the interests of the working class and grassroots sectors; some will be pro-business capitalists; and some will be moderate democrats. The pro-Beijing patriots will by no means be united, politically speaking. Most importantly, their agenda after the LegCo election will likely focus on housing, land policy and social welfare, because in the eyes of PRC authorities, Hong Kong remains an excessively “capitalistic” society, marked by a huge income gap between the rich and the poor, severe urban poverty, social immobility and a lack of social welfare benefits. This is seen as the root cause of social unrest in the anti-national education campaign of 2012, the Occupy Central Movement of 2014, the Mongkok riots of early 2016, and the anti-extradition movement of 2019.

Hong Kong has changed drastically since the promulgation of the national security law in June 2020. China’s comprehensive jurisdiction over Hong Kong means that its people are expected to respect and support the CCP; that they should not do anything deemed to violate China’s national security and its developmental interests. Most importantly, the people of Hong Kong must be sensitive to the question of China’s sovereignty, meaning they should not assist foreign forces to intervene in the internal matters of the PRC.

Supporters of the national security law are hailing the present situation as a triumph of social stability. Critics are seeing it as a victory of authoritarianism. The divided views within the society of Hong Kong are shaping the responses of Hong Kong people to the implementation of the national security law. For those who have decided to leave, they see Hong Kong as entering a new era in which the old ways are gone for good. For those who opt to stay, varying responses can be seen, ranging from apathy and silence, to cynicism and non-participation, and to accommodation and opportunism. But with the red lines increasingly clear, it seems certain Hong Kong will be governed by patriotic elites. Whether they can really represent public opinion remains to be seen.