Reflecting on Australia’s historic perceptions of China could deliver understanding of the “real differences and complementarities” between the two countries and inform the “pragmatic compromises and effective policies” needed to secure our future, writes David Walker.

Sinophobia is the product of fear and suspicion of China as an allegedly hostile power bent on destroying the West. For much of the twentieth century, its foremost fictional embodiment was the brilliant but amoral bioterrorist, Dr Fu Manchu whose sole aim was world conquest.

In 2021, the Australia Institute asked representative populations from Australia and Taiwan about the risk of Chinese invasion. Remarkably, the proportion of Australians fearing an attack from China was not dissimilar from the Taiwanese response (42 percent versus 51 percent). The survey authors considered the results ‘astounding’ and were at a loss to explain them. I suggest that we need to look to our past.

Taiwan is only 161 km away from mainland China and was a Chinese province during the Qing dynasty. As emphasised in a speech for the 100th anniversary of the CCP, President Xi Jinping remains committed to “China’s complete reunification” with Taiwan and is prepared to use military force if necessary to achieve this.

The two nations' capitals are over 9,000 km apart and Australia has never been claimed by China. Nevertheless, China has loomed large in the Australian imaginary from the late nineteenth century. In 1901, a powerful motivation for Federation and the creation of the Commonwealth of Australia was the perceived threat from China, a country of four hundred million looming above a sparsely inhabited ‘empty’ continent holding fewer than four million settlers.

In 1887, in the lead-up to Federation, the British government chose a distinguished soldier, Sir James Bevan Edwards, who had served in China, to review the defence capabilities of the six Australian colonies. He found much that dismayed him, arguing that without unification and the formation of a national army and navy, Australia was dangerously vulnerable to Chinese attack.

Politicians like Sir Henry Parkes, Premier of NSW, found that fear of China had considerable political utility. At his famous speech at Tenterfield in October 1889, Parkes drew directly on Bevan Edwards’ review as a key argument for Federation. The colonists of the time were a diverse bunch, drawn from many parts of the British Isles, with sharp differences in culture, class and religion. How would these NSW “cornstalks”, Victorian “gumsuckers”, South Australian “crow-eaters” and the rest ever form a unified nation? Repeated talk of an “empty continent” suggested not only a concern about the scarcity of settlers but also a deep unease about their right to occupy their strange new homeland.

Henry Parkes had the answer — he invoked the “crimson thread of kinship” — their shared blood and their shared English language. After Federation and the implementation of the White Australia Policy, whatever Australians were, they considered themselves “Whites” first and on no account Chinese. Australia’s defenders would be the much mythologised “men of the bush”, doughty fighters celebrated by the national bard, Henry Lawson. In “To be amused” (1906) the poet describes valiant “bushmen” fighting to defend Australia, the last “outpost of the white man’s race”. In Lawson’s world, Australians were at their best and bravest when resisting an Asian invader. Populous China and Asia more broadly, had emerged as White Australia’s antithesis. China posed the primal existential threat.

These ideas permeated Australian popular culture particularly in the form of invasion novels. The first appeared in 1888 when William Lane, a journalist and prominent Labour Movement activist, ran a serial in the Boomerang describing a Chinese invasion of Australia. The plot is instructive. A Chinese businessman, tired of the mere accumulation of wealth is determined to exercise real power and political influence. After worming his way into Queensland’s governing elite, he so charms the premier’s daughter that she agrees to marry him. Much underhand nastiness and an attempted Chinese invasion are to follow. 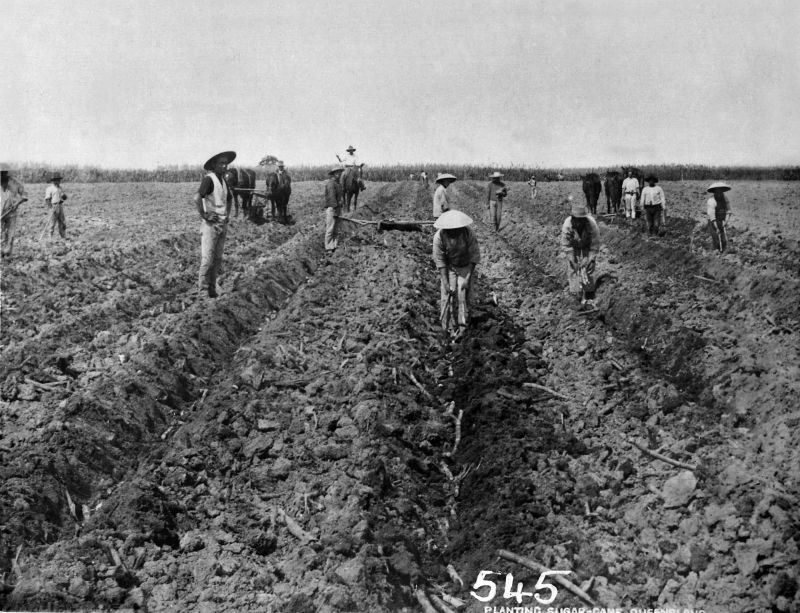 While ostensibly looking outwards to the invader, invasion writing typically addressed domestic debates about national strengths and vulnerabilities. The genre delights in providing technical details about the latest naval ships, aircraft, or submarines. But we misunderstand ‘Invasion’ if we think of it only as an armed attack. It is much more than this and references less easily named vulnerabilities like the fear of being watched or encroached upon, or about being under surveillance or economically compromised. Such fears readily feed conspiracy theories. Durable tropes often include the idea of an amoral Chinese mastermind, hell-bent on world conquest; the presence a highly detailed plan patiently implemented over decades to achieve this end and fears of Chinese hordes as an irresistible natural force “swamping” or flooding the continent. With the Chinese hordes would come contagion and all manner of dread diseases. Accordingly, China was a destructive force threatening the future of the civilised world of which Australia was part.

Through the 1930s and 1940s, Japan displaced China as the major Asian threat, but after 1949 “Red China” surged back into prominence. The danger loomed large during the Korean War and the war in Vietnam which followed. On the conservative side of politics, the menace of Communist China proved a convenient stick with which to herd voters to the right. The Conservative Cold War warrior Malcolm Muggeridge visiting Australia in 1958 predicted that China would invade Australia within fifteen years. His sponsor, the Catholic intellectual B.A. Santamaria, spelled out the three-stage plan during his regular radio broadcasts. How did he know? He claimed to have seen a secret document that laid it all out.

By the 1980s, demonic tropes of invasive China were giving way to an enthusiasm for the Chinese market. The growth of China trade became all important. Calls came for Australians to become more “Asia-literate”, a policy that was never successfully implemented. Moreover, calls for “Asia literacy” were not accompanied by an acknowledgement of Australia’s long history of anxiety about rising Asia and the continued appeal of Sinophobia. We were encouraged to “know Asia” but not to know ourselves.

In consequence, as President Xi becomes more assertive, old fears can too readily trigger past anxieties and pre-determined attitudes. Sinophobia is like a virus inducing brain fog and inhibiting clear thinking. Having 42 percent of Australians fearing Chinese invasion points to a significant cultural and educational failure. We have not prepared our population well for emerging geopolitical realities. As Asian economies grow, the European world may well shrink in significance and political clout. Our politicians and military personnel need to develop strategically informed policies and long-term plans to recognise and deal with this. We must also reinvest in skilled diplomacy.

There is no need to roll over and accept whatever an increasingly authoritarian China might dictate, but clearly the received narrative of a demonic and destructive China does not help us adapt to this rising power. Rather we need a deeper understanding of the real differences and complementarities between our two countries so that pragmatic compromises and effective policies can be reached that truly benefit Australia.

David Walker was the inaugural BHP Chair of Australian Studies at Peking University from 2013 to 2016. His latest book, co-authored with Li Yao, is Happy Together: Bridging the Australia China Divide, Melbourne University Press, 2022.