The early success that won President Moon Jae-in's party a landslide victory in national assembly elections and had foreign leaders calling for advice, is under challenge. Seoul faces a ‘prolonged war’ to beat the virus.

South Korea is one of the region’s success stories in combatting COVID-19 despite initial fears the country would be rapidly swamped by infections. Quick action by authorities to limit the outbreak gave them breathing space to ramp up tests and other containment measures. A “super-spreader” was responsible for about half the cases, and while the country managed to flatten the curve, there was a slight increase as measures started to relax. South Korea fell back on its industrial and technological strengths and employed a strategy called TRUST, drawing on lessons learned from previous outbreaks of the virus-borne respiratory diseases MERS and SARS.

Though its economy took a hit especially in internationally-exposed industries, and despite several months of mixed domestic approval of the government’s response, President Moon Jae-in ultimately won powerful public endorsement for his handling of the COVID-19 crisis on 15 April. His party had a historic landslide victory in national assembly elections. Moon also received international acclaim for his country’s fast and innovative approach, including the use of drive-through testing sites, tracking technology and phone apps, and promoted this by sharing South Korea’s experience with many world leaders through his “coronavirus diplomacy”. 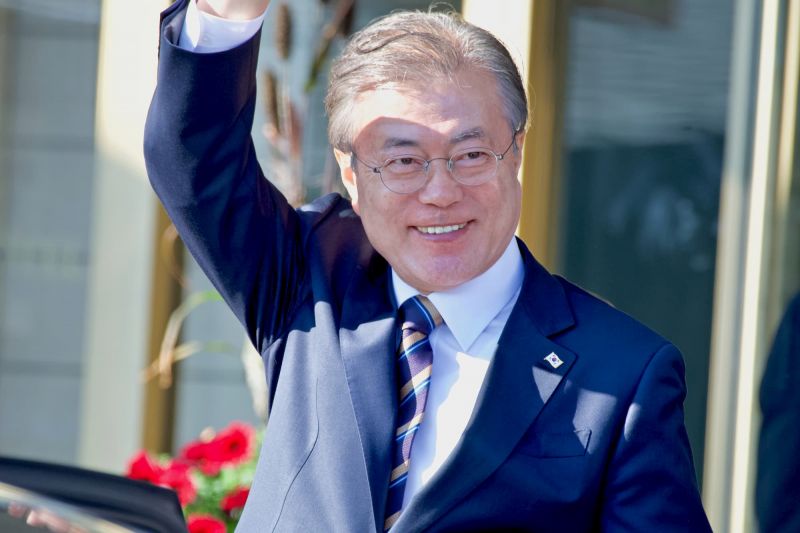 South Korea’s first confirmed case of COVID-19 arrived with a tourist in late January. By 14 May, it had the fifth largest number of confirmed cases of the virus in the Western Pacific – a large share of them linked to the Shincheonji Church of Jesus in the city of Daegu. There have been 10991 recorded infections and 260 deaths.

On 18 February, “patient 31”, who became a “super-spreader”, passed the virus to other members of the Shincheonji Church and other residents of Daegu. The rate of infection then increased exponentially - 180-fold in 14 days, sometimes adding more than 900 cases a day. The South Korean government quickly acted by announcing it would test over 200,000 followers of that denomination.

Within a few weeks, the situation was brought under control with new daily cases only reaching the dozens. Even so, South Korea is bracing itself for an increase again due to imported cases and cluster outbreaks. Medical, social welfare and religious facilities, call centres, and recently nightclubs, have seen small clusters, generally occurring in urban areas with greater population density.

Unfortunately, in early May, South Korea started to see a fresh outbreak, with the daily new case count rising from around 10 to over 30 with most infections being locally transmitted. This is the biggest jump in about a month, and it has been linked to a man spreading the infection while hopping between night-clubs. This spike came as restrictions were being eased, and other countries will no doubt observe this change of events in considering when and how much to ease their own movement controls.

South Korea galvanised itself into action as soon as COVID-19 broke out in China. Through a strategy it named TRUST—transparency; robust screening and quarantine; unique but universally applicable testing; and strict control and treatment—it was able to put itself in a solid position to tackle the virus.

The government was quick to partner with the private sector to develop a diagnosis kit, with the first commercially available one being approved in early February. It has over 600 testing sites. As of May, the country had conducted about 655,000 tests. South Korea has emerged as the top exporter of coronavirus testing kits during the COVID-19 pandemic, with at least 106 countries procuring the essential medical equipment from Seoul. As part of its wider containment efforts, the government passed laws to prosecute anyone suspected of being infected who refused to be tested. It’s clear that quarantine measures for potential and confirmed patients and their contacts also have helped. Depending on the severity of the case, quarantine occurs in hospitals, in repurposed public institutions, in dormitories borrowed from companies like Samsung and LG or in homes.

By learning lessons from previous virus epidemics, South Korea has developed innovative methods to contain the spread of disease, and already had existing bureaucratic units to deploy. Its methods like drive-through test stations and phone apps like Corona 100m, warning people of nearby cases, have received international acclaim.

South Korea also used the usual measures like asking people to wash their hands, wear face masks, and practice social distancing. Many have attributed South Korea’s success also to the public’s willingness to observe voluntary measures, often quoting adherence to the values of Confucianism. Others dismiss this outright, and point to the strong government measures and learned experience from previous epidemics as leading reasons for tackling the virus. South Korea, like many other countries, also kept schools closed.

The question is, have these responses been effective? South Korea managed to massively reduce the rate of infection after it had spiralled, and has one of the lowest mortality rates. In the past month, daily cases fell to about ten or under, and Moon was hailed for the success in containing the spread. Unfortunately, South Korea is starting to see a small increase in cases again. It is conceivable that we’ll see even more cases arise given the relaxation of some measures, but we should have some confidence in the government based on its record.

The Economy: The Price of Interdependence

As of March, South Korea’s real GDP growth was forecast to be two percent this year, a reduction of 0.3 percent compared to the estimate made late last year. The World Bank says a protracted COVID-19 outbreak could cause GDP to contract this year by nearly five percent more than its previous estimate.

Internationally-exposed industries, like automotive and tourism, are among the hardest hit. Automaker Hyundai Motors, for instance, is struggling to get parts due to cuts by its suppliers sourcing from China, and it anticipates losing $35.85 million in sales revenue. The tourism sector also expected a huge loss of 2.9 trillion won ($3.9 billion) in revenue in Q1. 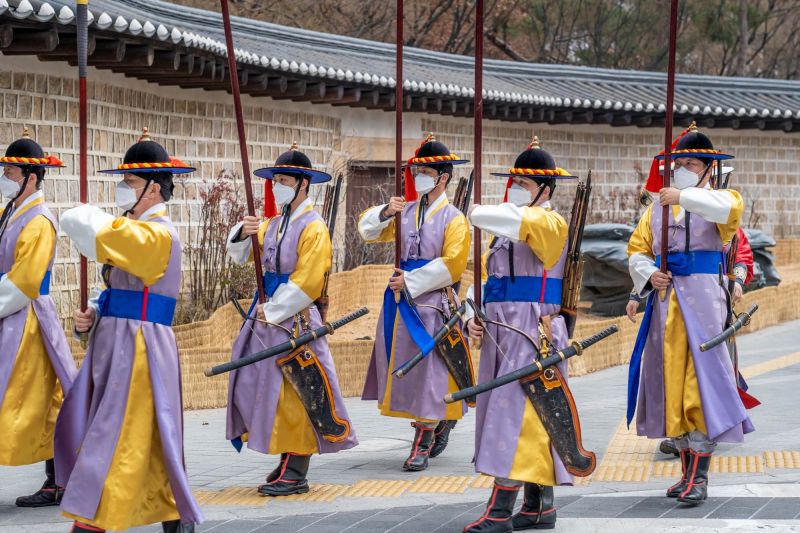 The government has rolled out a series of measures to mitigate the economic impacts. It is helping local government through a reserve of 136.7 billion won ($171.3 million) to support their efforts against the virus. Compared to Australia the fiscal stimulus has been small – 11.7 trillion won ($14.9 billion) was announced in March, comprising 3.2 trillion won to combat the revenue deficit and 8.5 trillion won as additional fiscal injection.

This stimulus package would, according to the Finance Minister Hong Nam-ki, focus on “vulnerable sectors, small- to medium-sized businesses and self-employed people…". About 2.3 trillion won would go to medical institutions and fund quarantine efforts and 3 trillion won would go to SMEs. Smaller companies are also being propped up through a special loan guarantee programme to help them with loan repayments.

South Korea’s internationalised economy is heavily dependent on global markets and supply chains, especially in China. The high degree of interdependence is evident in manufacturing and services sectors like travel and retail. How quickly South Korea’s economy recovers will be greatly linked to that of China and its other key trading and investment partners like the United States and Vietnam: watch this space.

Moon and the Minjoo Party knew they would be judged for their performance in handling the coronavirus in national assembly elections on 15 April –  and it was a resounding success for them. In a landslide win, his party and its smaller affiliate won an absolute majority (180 out of 300 seats) – the largest majority in the national assembly by any party since 1987 – with the highest turnout in voters since the early 1990s. This should give Moon a foothold in dealing with other political tests that arise during this term.

Opposition politicians had been quick to blame Moon for being too slow at prohibiting people entering from China, and not supplying enough face masks for citizens. They promised to make Moon’s “incompetence” the primary election issue.

Before the elections, the public expressed a mixed verdict on the government’s performance. A survey by the International Public Opinion Lab at Western Kentucky University revealed that the crisis had not fostered bipartisanship; party identification still prevailed when it came to perceptions of the government’s response. Approval ratings for Moon and his Minjoo Party took a hit in February corresponding to the first main cluster spread.

Two petitions hosted on the country’s official communication platform added to this picture. When a petition to impeach Moon was launched, 1.5 million South Koreans signed. These signatures came soon after the surge in infections. Another 1.5 million Koreans then showed they supported the government’s response through a counter petition. The primary complaint of the initiator of the petition against the government was that Seoul was putting its relationship with Beijing ahead of the wellbeing of South Koreans. “I feel like I am looking at the Chinese President when I see President Moon”, the petitioner was quoted as saying.

The rise in anti-Chinese sentiment is alarming to those vested in a close relationship between Seoul and Beijing.  Signage on businesses not allowing Chinese people to enter is spreading. This may put a strain on relations with China if the South Korean government is not seen to condemn such behaviour.

International observers have commended Moon for containing the virus using “democratic” means. South Korea has been hailed as a model, and his discussions with at least 20 other world leaders about South Korea’s response have shown the value in “coronavirus diplomacy”. The United Kingdom, United States, Canada and Germany are some of those already replicating South Korea’s drive-through testing stations. The French President and Swedish Prime Minister are among those who have reached out to Moon in a bid to learn more about how to slow the coronavirus at home. His government’s response has earned brownie points for him and South Korea that may have an enduring lustre – the country may be the first port of call in future pandemics or other crises requiring a swift, adaptive and innovative approach. 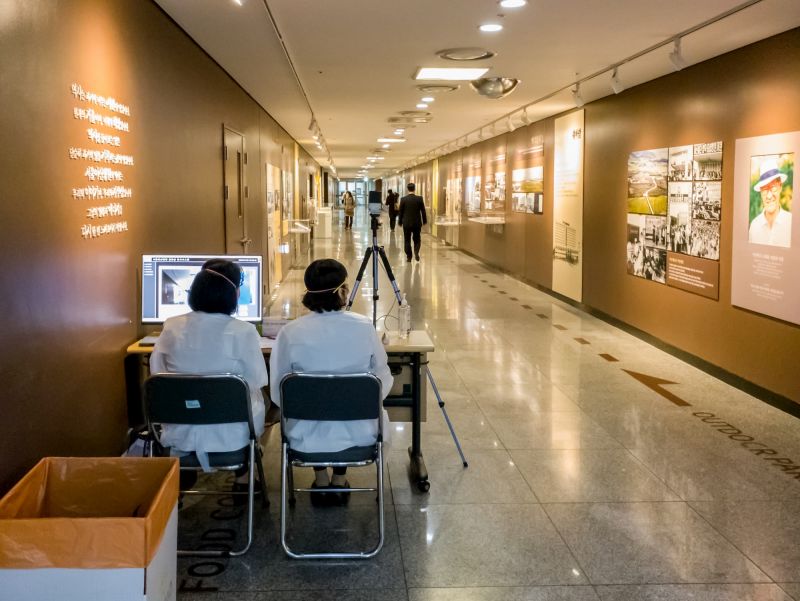 This perceived success really comes down to the country’s rapid response in developing quick testing capabilities and its innovative strategies. Some of these responses were facilitated by lessons learned when the country experienced the serious outbreak in 2015 of the virus-borne respiratory disease MERS.  It led to the Infectious Disease Control and Prevention Act (IDCPA) being amended to enable the Health Minister to collect data on potential and actual patients.

Phone booths with medical professionals separated from suspected patients by glass have allowed the country to increase capacity ten-fold. Phone apps and Korea Centers for Disease Control’s website also identify hot spots. The South Korean government texts its nationals to report an investigated case in their vicinity. Many world health officials consider this the gold standard. The Korean Medical Association, by contrast, had urged the government to adopt stronger measures in six statements issued before the exponential outbreak occurred in Daegu.

Other critics might question the claims of a ‘democratic’ solution in the face of an erosion of privacy.

For now, Moon’s electoral win means he can keep the critics on both sides at bay.  He will be under pressure now to maintain the high standard he has created, and the world will be watching closely as the number of cases begins to rise again. As he said, this is a “prolonged war” and this is not the time for complacency.