As Hong Kong marks the halfway point under the ‘one country, two systems’ guarantee, the governments of the People’s Republic of China and Hong Kong are betting that focusing on quality of life and better governance will contain any political dissent, writes Sonny Lo.

Chinese President Xi Jinping’s visit to Hong Kong to mark the anniversary of the 1 July 1997 handover of sovereignty over the territory from Britain to the People’s Republic of China (PRC) brought important implications for Hong Kong’s future.

On this anniversary, the Hong Kong Special Administrative Region (HKSAR) reached the half-way point of the 50-year guarantee that China would preserve the unique system and way of life of the Hong Kong people – the “one country, two systems formula”.

After the political turmoil in recent years, the central and SAR governments used the 25th anniversary of the handover to signal two broad thrusts of future policy: inclusive economic development and effective governance. Both governments are betting that improvements to the quality of life of the Hong Kong people and to the quality of government delivery will contain any political dissent.

First, the central government and the HKSAR administration are promising to give greater attention to concerns over resident’s living standards and welfare, which have suffered especially during the COVID-19 pandemic as Hong Kong and the mainland pursued a virus elimination strategy. The new Hong Kong Chief Executive John Lee, whose swearing in was witnessed by Xi, plans to prioritise issues like housing, cost of living, employment and other broad economic issues.

Of these, Lee is expected to put special emphasis on the housing crisis. In his 1 July speech, Xi too noted the cramped and overcrowded living conditions experienced by many Hong Kong residents, highlighting widespread concerns over a housing shortage.

As a former assistant police commissioner and secretary for security, Lee is going to push his housing officials to get concrete results, speeding up construction and setting targets for the completion of new housing units each year to accommodate a greater number of residents in public housing.

Over the past 25 years, while Hong Kong was embroiled in endless, and what turned out to be fruitless, debates over constitutional and political reform, little was done to deal with a whole range of basic welfare issues. Waiting times for public housing average five years, with queues for available dwellings constantly growing. Many people live in teeming ‘cage’ homes, congested and unsafe sub-divided units. Government departments lacked effective coordination and strong leadership to solve all these issues.

Second, Xi explicitly expressed his hope on 1 July that the standard of governance in the HKSAR would increase. While the national security law enacted by the National People’s Congress and then implemented by the HKSAR government since late June 2020 has already curtailed public dissent, the electoral system of Hong Kong was also changed in March 2021 to ensure the dominance of the “patriotic” elites governing the HKSAR. 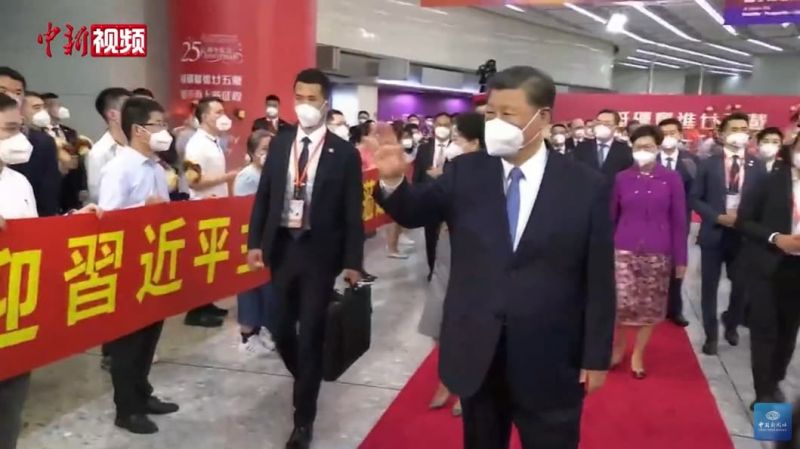 As such, government bills can now be passed more easily in the revamped Legislative Council (LegCo). At the most recent LegCo election in December, the legislative dominance of the “patriotic” elites was secured. With a sole democrat in the 90-member LegCo, according to the media, executive-legislative relations are now far more harmonious, and the legislature no longer constitutes a serious threat to the executive branch.

Xi says he wants the three branches of government — executive, legislature, and judiciary — to engage in mutual accommodation not just provide checks and balances. His 1 July remarks imply that the central authorities in Beijing expect an efficient HKSAR executive, a more cooperative legislature, a judiciary able to maintain checks and balances, and all three working to support each other.

Still, the new LegCo has witnessed some members critical of the government, notably some newly elected “patriots”. Clearly, a loyal opposition is emerging in the HKSAR.

Democrats, who mostly either boycotted the elections or abandoned participation in the December 2021 LegCo elections as candidates or voters, will have to be more politically pragmatic in the coming 25 years. Their use of language in the push for democracy must change. Instead of advocating a wholesale Westernisation of Hong Kong’s political system along the lines of the so-called “double universal suffrage” in selecting the entire LegCo and the Chief Executive, they should arguably first participate in the 2026 LegCo elections.

Some also should participate in the forthcoming District Council elections, which according to the media are likely be held in November 2023. If the democrats demonstrate their acceptance of the new political system and embrace it through active participation, there would perhaps be a realistic chance of the central authorities considering the selection of universal suffrage for the people of Hong Kong to elect their Chief Executive by 2037.

So long as the local democrats refrain from participation in local elections, their withdrawal will not be conducive to the progress of democratic reform in the HKSAR. The pro-establishment camp has already actively participated in the new LegCo elections, but pro-Beijing forces alone will not be a sufficient condition to propel a consensus that will move the political system forward.

Of course, critics of the above democratisation model would again say that it would constitute a strong and powerful Chief Executive with a mandate from the ordinary people, and that the LegCo would remain relatively weak. However, critics must be politically realistic. The Basic Law of the HKSAR has already implanted an executive-led political system. After all, Xi’s speech on 1 July also underscored the importance of maintaining the executive-led system in the HKSAR.

The Hong Kong model of democracy is characterised by the election of the Chief Executive by an election committee composed of overwhelmingly “patriots”. It is also punctuated by the rule of law, the continuation of the common-law system, the persistence of civil liberties, and most importantly a mass media and a civil society increasingly displaying the feature of loyal opposition. Civil society has already been tamed and interest groups have to be more skilful and tactful in articulating their demands instead of mobilising the masses as they have in the past.

At the same time, the HKSAR is expected to integrate with the Greater Bay Area (GBA) far more tightly than ever before and it is being encouraged to speed up the development of innovative technology industries. Hong Kong’s status as a financial centre remains unchanged – Xi emphasised that the HKSAR will still play a crucial role in China’s modernisation as a bridge to the outside world.

Xi also emphasised that the “one country, two systems” formula will continue for a long time – a remark designed to reassure the people of Hong Kong, but one also directed at the next irredentist target, Taiwan. It can be expected that the PRC will turn to the Taiwan question in its forthcoming and historic Party Congress in October this year.

The PRC authorities are keen to remake Hong Kong in the 25 years left before the “one country, two systems” guarantee expires. Events are driving the HKSAR to be outwardly more politically harmonious than before, economically more integrated with the mainland, socially more identified with the mainland due to the implementation of national civic education, and culturally more receptive to mainland’s values and practices.

Some degree of ‘mainlandisation’ is inevitable. But a balance between the internationalisation and the mainlandisation of Hong Kong must be struck in order for the HKSAR to preserve its past strengths – a requirement that may constitute a challenge in the next 25 years.

The new Hong Kong is going to exhibit unique features: outward political harmony, economic integration with the Greater Bay Area, the persistence of the rule of law, an independent judiciary, a more politically loyal civil society and mass media, a population more identified culturally and politically with mainland China, and a government that attaches importance to national security, administrative efficiency and coordination.

Meanwhile, the policy priority will be on bread-and-butter issues – solving growing housing, livelihood, and economic challenges. It remains to be seen how this new Hong Kong will unfold between now and 2047.

Sonny Lo is a political commentator in Hong Kong.