The new AUKUS pact symbolises a nuclear-powered move away from being a country with the self-respect of true independence, writes John McCarthy.

Former British prime minister Harold Wilson was quoted — possibly apocryphal — as saying that a week is a long time in politics. This has been a very long week.

On most hard issues, policy is a viscous, not a clear-cut, commodity. So the advocates and opponents of AUKUS won’t have a walkover on what is the best boat for Australia.

Australians lacking a phobia about things nuclear will see the merits of more powerful boats and a stronger navy (let us leave it to the experts as to which boats can move more stealthily though our northern approaches). For the old-fashioned anti-nuclear crowd, time has moved on.

If we are to change to nuclear-power ships, why did we not go all the way five years ago? Where was the problem then? The Americans had size and clout. The British boats worked. So did those of the French.

Was it impossible to persuade the Australian public of the merits of nuclear-powered boats? We never even tried. And yes, there was a China threat then as well.

Whatever might have been, we have now charted a clearer course on boats. But why this course?

The Brits are a skillful bunch, but the Americans know more about submarines. The main British objective under their appalling political leadership seems to be to find something meaningful to do after the Brexit debacle – unless there exists some arrangement between the US and the UK about which we Australians are in the dark. Maybe a British boat would be a better one for our needs. It will be interesting if Uncle Sam agrees. 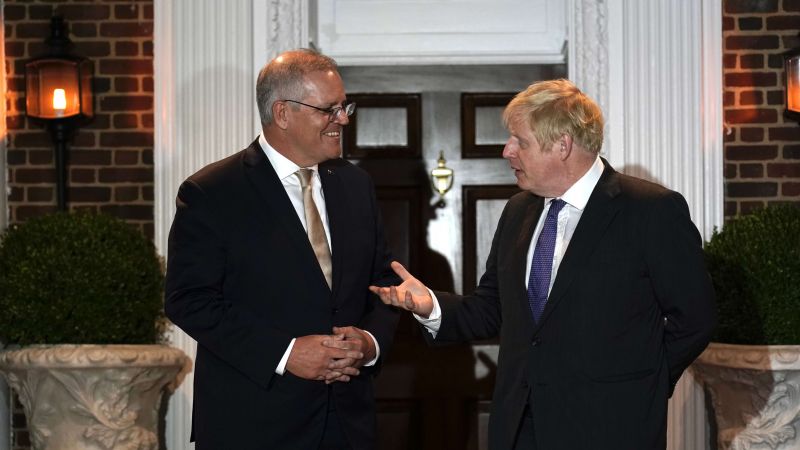 The widely publicised visit of a British aircraft carrier to the Asia-Pacific region this year did not include dropping in for a beer in an Australian port.

So keep families together, yes. Honour our dead together, yes. But less cant about strategic cooperation. And please, please, don’t seek to mimic the US-Australian mateship nonsense.

And what about the French? We remain anglophiles under our thin wreath of multiculturalism. We forget that in Europe — after Brexit — Germany and France are more powerful than the British. The French remain a Pacific nation – a big one. The total British diplomatic presence in the Pacific might equal in numbers their diplomats in a couple of Balkan states.

Why did the Americans go quite so far in rescuing us from our submarine fiasco when Joe Biden could not even remember Scott Morrison’s name? The US President clearly wanted to get the Afghan disgrace off the front pages. More important, Biden now sees China as a bigger strategic threat than Russia – and it is.

But we forget the offence to one of America’s three most important European allies given its issues with Russia, the Ukraine and the Baltics? The Americans must have calculated the damage to NATO through the deception of France at the Cornwell meeting with Biden and Morrison.

The depth of the mistake

Biden did not anticipate the depth of the French reaction. According to senior Washington sources, this was partly because the Americans could not believe the crassness with which the matter was handled by Australia. But that is not enough to explain the depth of the mistake.

However, for us – hype aside, the saddest thing about the recent shift is it diminishes the serious Australian diplomatic effort with Asia over 50 years or so, including the post-Vietnam bolstering of ASEAN, the building of APEC and so on.

We were never to be Asians – nor should we have been. But we were able to become an erstwhile British Dominion, which successfully developed strong regional links with our emergent postcolonial neighbours.

Post World War II, there were three main tenets to our foreign policy – a constructive role in the post-war multilateral order; the protective shield of ANZUS; and engagement with Asia.

Donald Trump did much to destroy the post-war order ANZUS has taken on – a new, and almost sacred, structure not foreseen before the growth of China.

And rather than spending political energy on our immediate region on how to handle the new world cleverly and in our regional interests, we now seem to be snuggling up again to our erstwhile great and powerful friends – most comfortable in the all-white Five Eyes circle.

Australia signs up to the Anglosphere

Yes! Some will say, what about the QUAD? It comprises Europeans and Asians. Careful! Good to have Japan – wealthy, and the best diplomats in Asia. But constitutional impediments to military activity remain, and there exist deep divisions in its polity between nationalism and pacifism.

The Indians have been enemies of China since the 1960s border war. They will go where their interests dictate. They will not veer from their doctrine of strategic autonomy. They have never much liked the QUAD. It is now more valuable to them, but it will never be an ANZUS or AUKUS.

In ASEAN, not all would eschew big Australian boats. But few see merit in further injections into the region of mutual Chinese-American hostility.

So let us not get carried away with AUKUS. It symbolises that the Americans are very serious about Asia and on a lesser scale about dampening down Australia’s insecurities. Good.

But we are moving fast from being a country with the self-respect of true independence.

This article originally appeared on the Australian Financial Review's site ($) on September 23, 2021.