The Cultural Context of Women’s Leadership 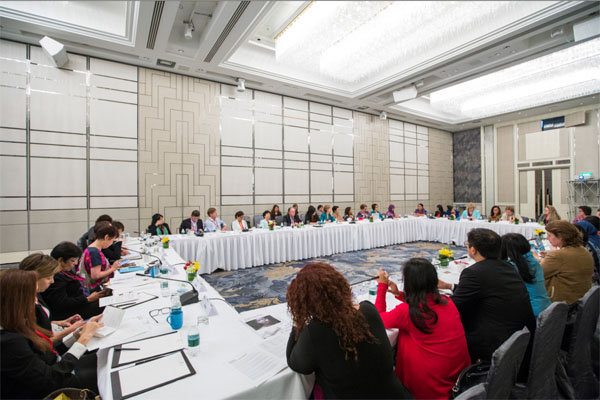 Last week, the Centre for ASEAN Regionalism (CARUM) at the University of Malaya, was honoured to partner with Asialink and the Lee Kuan Yew School in organising the Asialink Conversations on ‘Women in Leadership’.

Career success or failure for women is a very complicated issue, and there are differing interpretations of leadership across societies and cultures.

As director of CARUM and an executive Director of the Asia-Europe Institute, I was especially interested in the comparative perspectives on women and leadership that our discussions brought to light.

A growing body of literature exists on the gendered nature of careers in academia, business, and politics, but much of this looks at western countries.

Indeed, it would be possible for someone to question if there is indeed a glass ceiling for women in Malaysia. My institution has had a woman Vice Chancellor, four current deputy Vice Chancellors, out of whom two are women, and an equal number of male and female deans throughout the university. There are also clear examples of successful women who have charted upward achievements in education, government, economy and professional areas across Malaysia in which men used to have unchallenged monopoly.

There are now long-term planning and national policies in place for women to attain top leadership positions in Malaysia.

The government has mandated that women should occupy at least 30% of decision making positions in the corporate sector by 2016. To aid this, the Women Directors’ Registry’s offers a sourcing database that companies can refer to when looking to appoint women directors.

The National Institute for the Empowerment of Women has also made efforts to develop a sustainable supply of board-ready candidates, offering technical and soft skills training to help women directors. It also organises forums, dialogues, conferences and roadshows to change perceptions of women in the boardroom.

In spite of these initiatives, however, a number of studies and observations have shown the presence of women in top management positions to be low. For all the increases in better educated and more financially independent women, obstacles still exist at every rung of women’s careers.

For this region of the world, we need to look at cultural and religious factors. Stereotypical images of women, and gender roles related to ethnic values and traditions, have generated perceptions of politically correct behavior for women. This leaves only a very limited platform to raise pertinent women’s issues.

We need to have an understanding of the ways in which women experience and negotiate their careers.

Majority Muslim countries Pakistan, India and Indonesia – as well as India and Sri Lanka – have had female heads of government before Australia or the United States.

Within Malaysia, we also need to examine experiences of women in different ethnic groups. In states like Kelantan and Trengganu, for example, Malay women’s dominance in market trade is not a recent phenomenon, and Malays in Negeri Sembilan are governed under a matrilineal system. Matters such the dual court system where Malay Muslim family cases are held in the Syariah courts, and those of the other ethnic groups in the civil courts, are worthy of more consideration.

By delving into these and other issues, interest in women’s leadership should be created across institutions of higher learning and policy making bodies, as well as the corporate world and the government sector. The Conversations was a step towards more awareness of women’s leadership, and we were fortunate to have participants from a range of sectors who spoke about the different experiences in ASEAN and Australia.