We thank you for your support as we continue to drive creative engagement between Australia and Asia.

2019 was a special year for Asialink at the University of Melbourne.

We helped develop Australians’ regional insights, capabilities and connections, and set out to reach wider audiences in fresh ways, including through a new focus on rural and regional Australia and engaging our Asian-Australian and Indigenous communities. Across Asialink, we convened over 200 events, working with a wide array of partners both in Australia and the region; delivered our education programs in over 20 countries in the Asia Pacific; engaged with thousands of Australian executives through Asialink Business; co-hosted strategic Track 2 dialogues with China, India and ASEAN; and focused on the depth of Asian Australian engagement.

Deepening knowledge and understanding of the Asia Pacific is a central pillar of what we do as an organisation – and in 2019 there were some real highlights. Insightful and inspiring speeches on Australia’s engagement with Asia hosted by Asialink this year included the Prime Minister’s Address, the Weary Dunlop Asia Lecture and a speech by the Winner of the 40 under 40 Most Influential Asian-Australian Awards, STEM champion Dr Muneera Bano.

Browse through the full 2019 Asialink Report, below.

We hosted a range of distinguished guests as part of our events and isights program. Together with Bloomberg, in June 2019 we hosted the Prime Minister's first major foreign policy address of his new term of government.

In his Sir Edward 'Weary' Dunlop Asia Lecture, 'Asian Australians: Breaking the Bamboo Ceiling', former Foreign Minister and then-Chancellor of the Australian National University (ANU), The Hon Gareth Evans AC QC, highlighted the need for greater cultural diversity in Australia's leadership and the important role our Asian-Australian community can play in navigating engagement with the region. 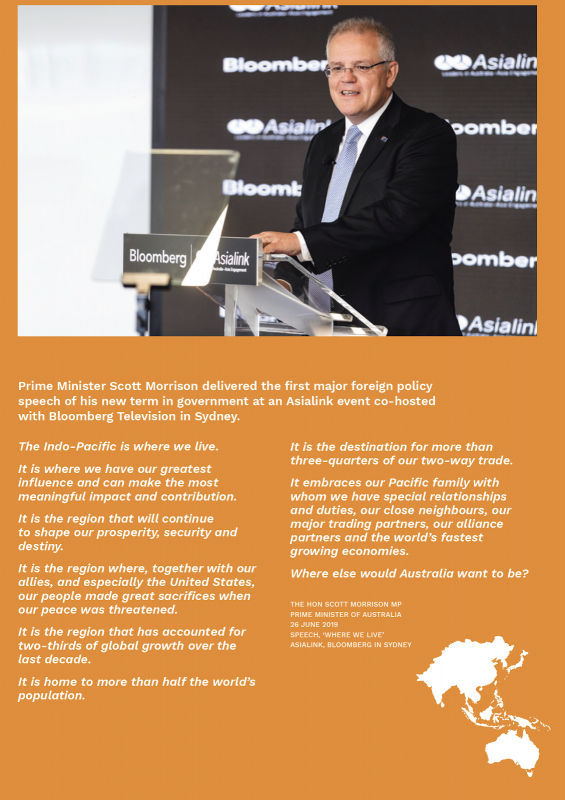 Other prominent speakers at our events included Minister for Industry, Science and Technology, The Hon Karen Andrews MP, Minister for Trade, Tourism and Investment, The Hon Simon Birmingham, Victorian Minister for Jobs, Innovation and Trade, The Hon Martin Pakula and many more.

The inaugural Asian-Australian Leadership Summit and 40 under 40 Influential Asian-Australian Awards, presented with PwC and the ANU in September, celebrated the exceptional ongoing contributions of young Asian-Australians, and aimed to tackle head-on the discrimination that continues to impede this community across sectors.

It underlined the systematic under-representation of Asian-Australians at the most senior levels of leadership in our government, companies and universities and the need for a greater focus on cultural diversity in Australia. Dr Pippa Dickson delivered keynote addresses at Beijing Design Week and the Setouchi Asia Forum in Japan and led delegations of Australian creative workers and artists to Korea and India. 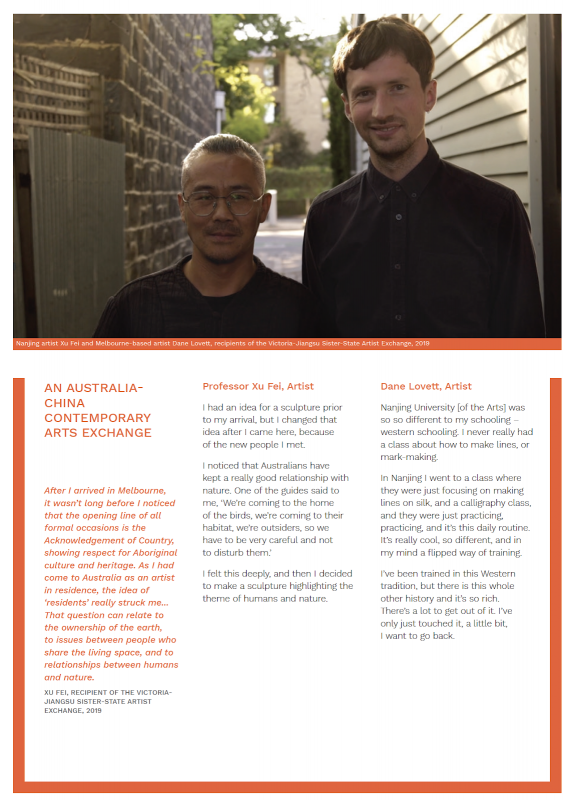 Through the Asia Education Foundation (AEF), our education program held the first ever National Australia-ASEAN Youth Forum, connecting students from across Australia with their Southeast Asian counterparts in real time at the Sydney Opera House.

The AEF delivered programs including the inaugural PNG-Australia Partnership Secondary Schools initiative—a first of its kind—and the celebrated BRIDGE program, connecting schools in Australia with partners in over 20 countries in the Indo-Pacific to reach thousands of students and educators. Asialink Business continued to deliver real impact as Australia's National Centre for Asia Capability. The groundbreaking Women in Innovation Leadership Dialogue and Activating Asia and Growing with Asia reports shed further light on the opportunities for Australian business right on our doorstep.

Asialink Business also delivered capability development programs and events to 14,000 executives in the workforce across 24 locations in Australia and Asia. A focus on Asia-capable leadership also saw tremendous growth in both our flagship Asialink Leaders Program and support of the New Colombo Plan, through both pre-departure training and professional development for alumni.

The Asialink Diplomacy team offered a breadth of insights in a busy year for elections across the region. The team criss-crossed Southeast Asia developing social entrepreneurs as part of the Australia-ASEAN Emerging Leaders Program, delivered briefings ahead of the seventh Asian Youth Forum, supported several Australia-Asia youth dialogues, held Track 2 Dialogues with China, India and ASEAN, and participated in key regional forums.

Successful engagement only works when there is mutual respect and the recognition that diversity and partnerships at home and throughout the region makes us stronger.

As we set out on a new strategic direction that prioritises the voice and mobility of rural, regional and indigenous communities, along with the large and growin Asian-Australian community, we invite you to think about how you or your organisation can contribute to a new creative engagement with Asia.