Cambodia and the Evolution of Peacebuilding: The Role of the Paris Peace Accords 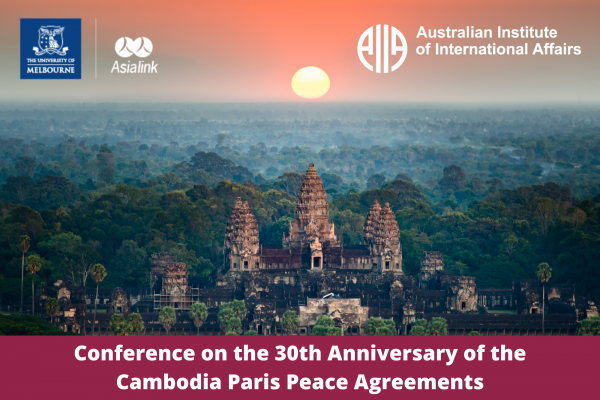 This year marks the 30th anniversary of the Paris Peace Agreements on Cambodia. The agreement, and the subsequent work of the United Nations Transitional Authority on Cambodia (UNTAC), brought an end to the wars which had beset the former Indochina since 1946, enabling Southeast Asia to enjoy significant regional stability for the first time since World War Two.

To mark this anniversary, Asialink and the Australian Institute of International Affairs (AIIA) are pleased to host a 2-day closed-door conference on the Cambodia Paris Peace Agreement and its implications for diplomacy, democracy, and peacebuilding in Southeast Asia.

Over four sessions held between the 28th and 29th of October, the conference will explore the many facets of the peace agreement, as well as how lessons learned from the agreement can be applied to the wider region.

Bringing together diplomats, scholars, government officials and those with personal involvement in the peace agreement process, the conference will explore the successes and challenges that arose as the agreement was brokered, as well as how the process of peacebuilding in post-conflict Cambodia impacted democracy and peacebuilding in the wider Southeast Asia region.

This conference is part of a series of activities planned by Asialink and the AIIA in 2021 to commemorate the 30th anniversary of the Cambodia Paris Peace Agreement.

The conference is proudly supported by the Australian Government Department of Foreign Affairs and Trade and the Department of Defence.