Despite Thailand’s status as America’s “oldest ally” in Asia, a combination of external and internal forces has been drawing Bangkok closer to Beijing. Jittapat Poonkham argues that for Thailand to retain its autonomy, a new activist foreign policy model is necessary in which it exercises greater leadership through regional diplomatic innovation and advocacy.

Thai foreign policy is frequently characterised by the metaphor of “bamboo”, bending with the wind. The simultaneous strength and flexibility of bamboo suggests a foreign policy that is both adaptable and pragmatic in its aim of securing national survival and independence. Within this discourse, Thailand blatantly plays one great power off against the others.

While this could be seen as simply expedient, Arne Kislenko sees Thailand’s diplomacy as based on “a long-cherished, philosophical approach to international relations”, which is “always solidly rooted” but “flexible enough to bend whichever way it had to in order to survive”.

But amid intensified great power competition, I argue this old narrative of bamboo diplomacy is becoming obsolete. Thailand needs to find a new and sustainable narrative to make sense of the world and position itself within a changing international society. The means to do this is what I term a “leading from the middle” strategy.

The need for a new foreign policy strategy is set against the backdrop of two broad trends – a decline in the level of Thai-US alignment and a rise in Thailand's engagement with China.

Testing Times for the Oldest Ally

Thailand confronts a critical juncture in global politics. Besides the COVID-19 pandemic and economic and technological disruption, it finds itself in the midst of a shift in the regional balance of power. Although it is not necessary for Thailand to choose sides between the US and China, the Prayut Chan-o-cha government, which rhetorically highlights a balanced and good relationship with great powers, in fact is moving closer to China, despite being a US treaty ally.

Thailand is often dubbed America’s “oldest ally in Asia”. Nevertheless, the perceived absence of the US from the region has changed the Thai-US alliance since the Cold War. Moreover, the recent focus on great power competition and the rise of China in the US’s Free and Open Indo-Pacific (FOIP) strategy is at odds with Thailand’s position that China is not a threat.

There are several characteristics to contemporary Thai-US relations.

First, the US commitment to the region and the alliance is perceptibly ambivalent. On the economic front, the US declined to join the Comprehensive and Progressive Agreement for Trans-Pacific Partnership (CPTPP). So far, Biden seemingly has not considered a return. This signals a lack of long-term US economic commitment in the region. Thailand is not a member, but might apply to join.

This also is coupled with an obvious gap in high-level US diplomatic interest. Ambassadorial posts to some ASEAN countries and Thailand remain vacant. Thailand has not been on the itinerary of visits by the highest US leadership. President Biden’s recently released Interim National Security Strategic Guidance in March 2021, failed to mention Thailand at all. 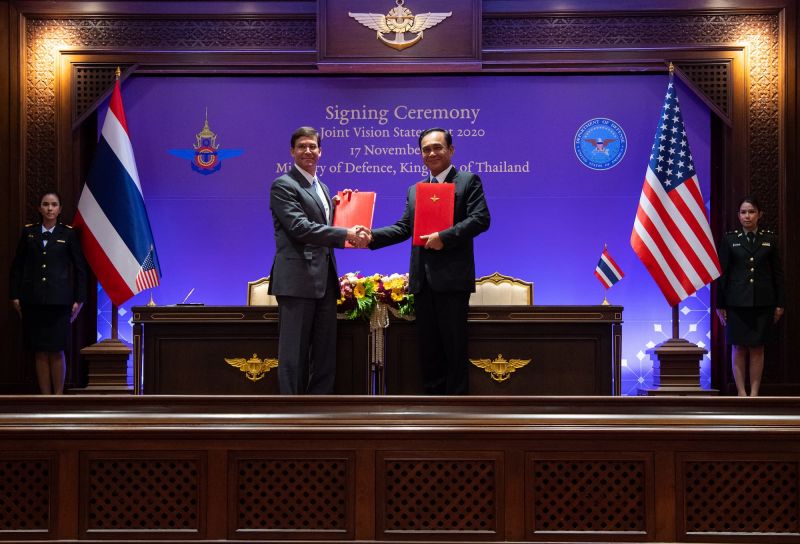 Second, the Thai-US alliance is increasingly military-oriented, rather than a comprehensive, multidimensional partnership. The 2020 Joint Vision Statement for the Thai-US Defense Alliance set the goal of “energizing and enhancing” army-to-army ties.

But the Thai-US alliance has suffered setbacks because of military coups and the lack of common enemies and threat perceptions.

One example is Cobra Gold — the Indo-Pacific region’s largest annual multinational military exercise — which has been annually co-hosted by Thailand and the US since 1982. It was downgraded immediately following the 2006 and 2014 coups to focus on humanitarian assistance and disaster relief operations.

Another example is access to Utapoa air base, which is vital to US strategic interests. The base in Rayong province is an important logistics hub for American forces. In 2016, Thailand made $30 million in upgrades to the naval airfield, in part to facilitate American logistics. But Thailand has refused access for some US operations, such as humanitarian relief to the Rohingya during the 2017-18 ethnic cleansing campaign in Myanmar.

Third, Thai-US economic relations face pressing challenges over issues such as the suspension of access to the Generalized System of Preferences (GSP) for trade and the failure of the US to match Chinese infrastructure investment.

In October 2020, then President Trump suspended $817 million in trade preferences for Thailand under the GSP program, citing the lack of equitable and reasonable market access for US pork products. This challenge remains under the Biden administration.

And although the US was one of the three largest foreign direct investors in Thailand during the first half of 2021, it has no equivalent to China’s infrastructure investment and development under the Belt and Road Initiative (BRI).

Fourth, Thai-US relations in the twenty-first century are unlike those in the Cold War when their anticommunism nurtured shared identities and interests. In the past decade or so, Thailand has not simply sought to avoid choosing sides, it has increasingly and actively leaned toward Beijing on key issues.

Shifting into the China Orbit

Thailand’s increasing shift into China’s orbit of influence has been apparent at least since the 2014 military coup. Xi Jinping and Prayut Chan-o-cha characterise Thailand and China as “one family”.

First, military relations between Thailand and China have strengthened considerably following the scale back in US defence cooperation with Thailand triggered by the 2014 coup. Beijing is replacing the US as Thailand’s main defence partner and arms supplier. It has offered an array of major weapons systems at cheap prices and with no strings attached. They range from main battle tanks and armored personnel carriers to naval vessels including Thailand’s first diesel-powered S26T submarine in January 2017. There are also joint-weapon programs including the DTI-1 guided missile system.

Joint military exercises have been expanded too. Thailand has participated in more combined military exercises with China than any other Southeast Asian country. The Thai and Chinese special forces have conducted joint exercises since 2005, the annual joint naval exercise Blue Strike since 2010, and a joint air exercise codenamed Falcon Strike from 2015. In contrast to many other ASEAN nations, Thailand and China do not have any serious territorial or maritime disputes that might negatively impact bilateral relations. Thailand envisions China as a partner underpinning prosperity and peace in the region. According to the 2020 CSIS survey of strategic elites, influential Thais largely viewed China’s growing role as beneficial and were relatively unconcerned about a perceived decline in the US presence in the region.

Second, Sino-Thai economic relations have deepened in recent years. On the trade front, China is Thailand’s largest trading partner with 12.29 percent of its exports going to China, compared with 10.75 percent to the US. Similarly, 20.16 percent of Thailand’s imports come from China versus 5.82 percent from the US. On investment, China surpassed Japan to become Thailand’s major source of Foreign Direct Investment in 2020.

China’s FDI now is 13 times that of the US. Much of that investment is in government infrastructure projects, like the high-speed railway and 5G network. The high-speed rail project will eventually connect Thailand to China via Laos and strengthen Beijing’s North-South infrastructure development. This increasing dependence on China is also endemic in the private sector, both at the level of local businesses and big conglomerates.

Third, people-to-people relations are being strengthened. China has become the major source of international students for Thai universities and tourists. In 2019, Chinese tourists made up 27.6 percent of foreign visitors entering Thailand.

Moreover, the appeal of China was accelerated by the imposition of Western sanctions following the 2014 coup, the COVID-19 crisis, and Beijing’s vaccine diplomacy.

Why doesn’t the old narrative of bamboo diplomacy work anymore?

The bamboo diplomacy narrative stresses continuity and tradition in foreign policy. It does not anticipate moments of change and rupture in the history of Thai diplomacy.

Thailand is now at one of those historical crossroads driven by three main factors: the rise of China and its attractiveness in security and economic terms; the decline in relative US strength and strategic commitment in the region; and the absence of clarity in Thailand’s own strategic posture and options after the coup.

The concept of bamboo diplomacy implies that Thailand will merely react and adapt to the strategic transformation underway. It is not a recipe for leadership or proactive policy.

What we really need is a new narrative to make sense of the changing world and to cleverly position Thailand within it.

Thailand should pursue what I call a “leading-from-the-middle” strategy. This requires maintaining good relations with all the great powers, while binding them within a rule or norm based order. It also requires Thailand to exercise leadership in its own interests by initiating region-wide politico-diplomatic innovations and advocacy. By this, Thailand can seek to reduce strategic tension and uncertainty amid the great power rivalry and preserve its own autonomy.

Jittipat Poonkham is Associate Professor of International Relations and Associate Dean for International Affairs in the Faculty of Political Science, Thammasat University. His forthcoming book, 'A Genealogy of Bamboo Diplomacy: The Politics of Thai Détente with Russia and China', will be published by the Australian National University Press in 2022.