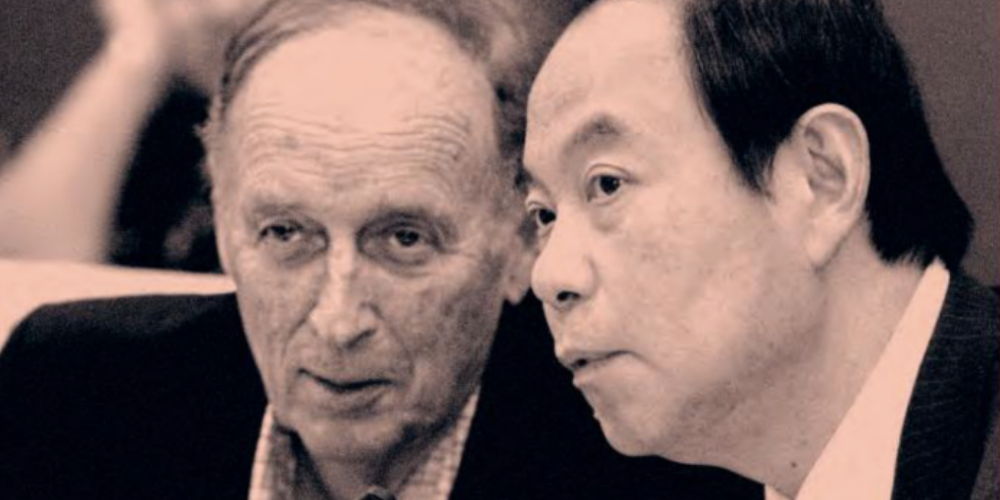 Bails Myer supported Asialink for almost 30 years and was patron for over two decades. He was concerned that Asia-Australia relations could not be left to government alone and he believed that:

effective regional relations extended beyond commercial and defence ties. Effective engagement requires the promoting of a regional conversation that extends to all manner of issues relating to human affairs.

And so — at a difficult time in Australia-Asia relations — he funded the Asialink Conversations, bringing together leaders from ASEAN and Australia and then partnering with Indian and Japanese institutions to form lasting respectful relationships across sectors and geographies.

Bails was a hands-on patron. In planning the Conversations, he sought advice from the founder of the Australian-American Leadership Dialogue and then brought in the ANU as a collaborator with Asialink. With the CEO of Asialink and the Dean of Asian Studies at ANU — and assistance from a number of Australian ambassadors — he travelled around Southeast Asia, introducing himself to regional leaders as a "retired shop keeper" from Melbourne. They soon learned he was a very special leader – a master of quiet, Track II diplomacy. In his easy, dignified way he conveyed Australia’s serious bipartisan commitment to engagement with the region.

Bails was humble but ever curious about "all manner of issues". He asked probing questions constantly – building relations with business and academic leaders, as well as with presidents and prime ministers. His energy and enthusiasm and punishing schedule during planning visits to the region, left younger members of the team in awe. Meetings would start at 7.30 and end at 10 or later – and there would always be the obligatory visit to a local department store.

The Asialink Conversations, which Bails initiated and supported, were held over some 16 years, and took place in Malaysia, Vietnam, Cambodia, Myanmar and Singapore. Asialink also brought Australian-Southeast Asian teams to Conversations in New Delhi, Hiroshima and Beijing. In addition to the Conversations process, Bails supported an ambitious Asialink report on Australia-Southeast Asia engagement – researched and written in the region, with contributions from key think-tank leaders in ASEAN. The resulting report, Our Place in the Asian Century: Southeast Asia as ‘The Third Way’ (2012), has been acknowledged as a significant influence on Australian policy development – including in the lead-up to the ASEAN-Australia Special Summit, held in Sydney in 2018.

Bails was supremely generous – acting quietly, time and again, without seeking recognition.  He hosted meetings, often in his home, to delve into many of the most challenging issues of our time with guests including local, regional and global leaders and topics ranging from international relations to climate change, immigration, science and technology, the arts, business and rural and regional issues. Bails always guaranteed a stimulating discussion with actions to follow – and you could be assured of his signature jokes. The inaugural Asialink Conversations, held near his rural property on the Mornington peninsular in 2002, included a dinner with a keynote address by former Prime Minister Malcolm Fraser, followed by karaoke. Bails recruited Asialink’s Jim Leibold to don the Elvis costume and perform. No one could say no to Bails and our ASEAN guests were delighted.

Just a few months ago, at 96, Bails was on the emails exploring views about AUKUS and encouraging deeper analysis and wider public debate. He supported and encouraged others to reach higher and engage more broadly. In his quiet, gentlemanly way, he was a highly effective connector. His commitment to so many causes, to his family and to his country has inspired great love and admiration for a truly great Australian.

It has been an absolute privilege to have Baillieu Myer as our patron and we extend our deepest condolences to Sarah, Sid, Rupert and Samantha and their families and to the wider Myer families.

Bails Myer had an instinctive sense of Australia’s place in the world. As a patron of Asialink he was an articulate advocate for deeper relations in the region. He knew Australia’s interests were best served by close ties to both the US and the countries of Asia.

In this, as in so many other things, his world view combined vision with wisdom.