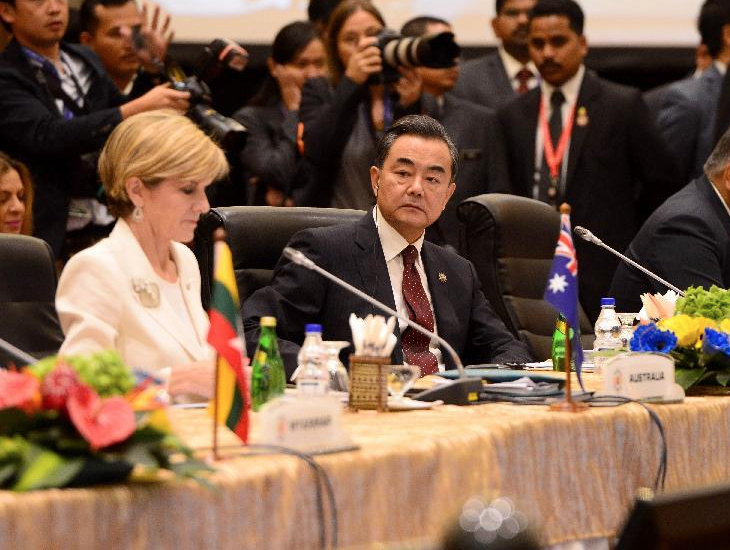 This year the East Asia Summit celebrates its ten-year anniversary. Professor Tony Milner looks back over a decade of collaboration in the region.

The East Asia Summit (EAS) was established to foster cooperation on key challenges facing the East Asian region and to advance closer regional integration and cooperation at a time of dynamic transition in East Asia. The inaugural EAS was held in Kuala Lumpur on 14 December 2005, bringing together regional heads of government with the ASEAN +3 leaders as well as those of Australia, India, and New Zealand. (The USA and Russia joined in 2011). Topics of focus include maritime security, regional economic integration, environment and energy problems, global health, natural disasters and pandemic diseases.

The heart of the EAS is the Leaders’ Meeting, but a number of ministerial and senior officials’ meetings are held throughout the year to implement the different initiatives. The ASEAN Economic Ministers’ Meeting, for instance, represents the whole range of EAS countries, and is beginning to form an EAS economic track. In such ways, the Summit, with its almost Asia-Pacific-wide membership, is expanding in practical substance. The EAS process has developed and improved over time, with a better planned Leaders’ meeting, additional secretarial support and a greater degree of coordination and follow-up between this body and other elements in the region’s institutional architecture. As ASEAN Chair in 2015, Malaysia has been instrumental in developing plans to strengthen the EAS.

While membership of the EAS extends to countries outside of East Asia itself, it is still very much an East Asian, not an Asia-Pacific (or Asian), initiative. Also, the bulk of the region’s business is still handled in ASEAN + 3 – the core East Asian body, which appears to possess the capacity to fulfil the identity aspirations of East Asian regionalism. Just how far the US presence will change the EAS, giving it a stronger Asia-Pacific character, is not yet clear. China in particular is wary, and there is a significant element of competition between the two regional institutions, the EAS and ASEAN + 3. It is also uncertain what impact Japan’s new regional activism will have on the balance between these institutions.

In 2006, the ASEAN Defence Ministers’ Meeting (ADMM) was created and designed to promote `mutual trust and confidence through greater understanding of defence and security challenges as well as enhancement of transparency and openness’. This was expanded in 2010 with the incorporation of Defence Ministers from ASEAN’s Dialogue Partners (of which Australia is one). The biennial meeting and expert working groups of the ADMM Plus explore topics including maritime security, counter-terrorism, disaster management, peacekeeping operations and military medicine. In Brunei, in June 2013, a military medicine and disaster-relief exercise was held, and succeeded in bringing together some 3,000 troops from China, Japan, India, Indonesia, Viet Nam and the USA.

ASEAN calls the ADMM Plus an `open and outward-looking’ initiative and, although the organisation possesses strong potential, concern has been raised around how it relates to other regional institutions, for example the ASEAN Regional Forum (where Foreign Ministers meet), the Expanded ASEAN Maritime Forum and the EAS itself. In 2014, the Track Two organization, CSCAP (Council for Security Cooperation in the Asia Pacific) produced a memorandum – based on a consensus, including China – that advocated giving greater leadership to the EAS, while affirming ASEAN centrality.  Malaysia, as Chair of ASEAN in 2015, has taken up this recommendation for enhancing institutional coordination.

There have been a range of trade partnerships proposed in recent years, the subject of which has sparked substantial regional debate. The ASEAN-led Regional Comprehensive Economic Partnership (RCEP) for example, overlaps with and in many ways stands in competition with, the US-advocated Trans-Pacific Partnership (TPP). Over recent weeks the TPP process has faltered badly – with the United States involved in disputes with both Japan and Australia – and RCEP has gained momentum. Then there is the Free Trade Agreement of the Asia-Pacific (FTAAP), announced by China at the Beijing APEC Summit last year. This would be the most ambitious agreement of them all – at least in term of geographic reach.

The particularly significant establishment of the Asian Infrastructure Investment Bank (AIIB) developed by China has added to the complexity of the debate around the region’s economic architecture. The AIIB, according to one senior Chinese official, ‘will provide financial support for regional infrastructure connectivity’ and China has already committed US $40 billion. Tensions around the establishment of the AIIB, however, have already flared – including between the US and its traditional allies such as Australia and the UK, who have recently thrown support behind the initiative. The Obama government, in fact, actively campaigned against the AIIB in an effort to protect United States economic and political dominance in the Asian region. As President Obama asserted in April 2015,

In its various initiatives, however, China is not only challenging the United States and Japan: inevitably ASEAN counties will begin to wonder how confident they can be about retaining the driver’s seat of Asian regionalism. As these negotiations continue to play out, initiatives like the East Asia Summit have the potential to foster collaboration and offer a platform for less dominant nations to be heard.