In a New York Times interview in 2017, President Trump seemed to suggest that with a weakening US deterrent, Japan and South Korea could obtain their own nuclear arsenal to protect themselves from North Korea and China. America ‘cannot be the policeman of the world’ and the world we live in is ‘a nuclear world now’.

Shortly before heading to Osaka for the G20 summit at the end of June, Trump was reported as ruminating privately about terminating the defence treaty with Japan, because of its unfair allocation of burdens between the two countries. On 26 June, in a TV interview with Fox News, Trump remarked that an attack on Japan would obligate the US to launch World War III and expend US lives and treasure. But if the US was attacked, the Japanese could just sit back and watch it on Sony TV. 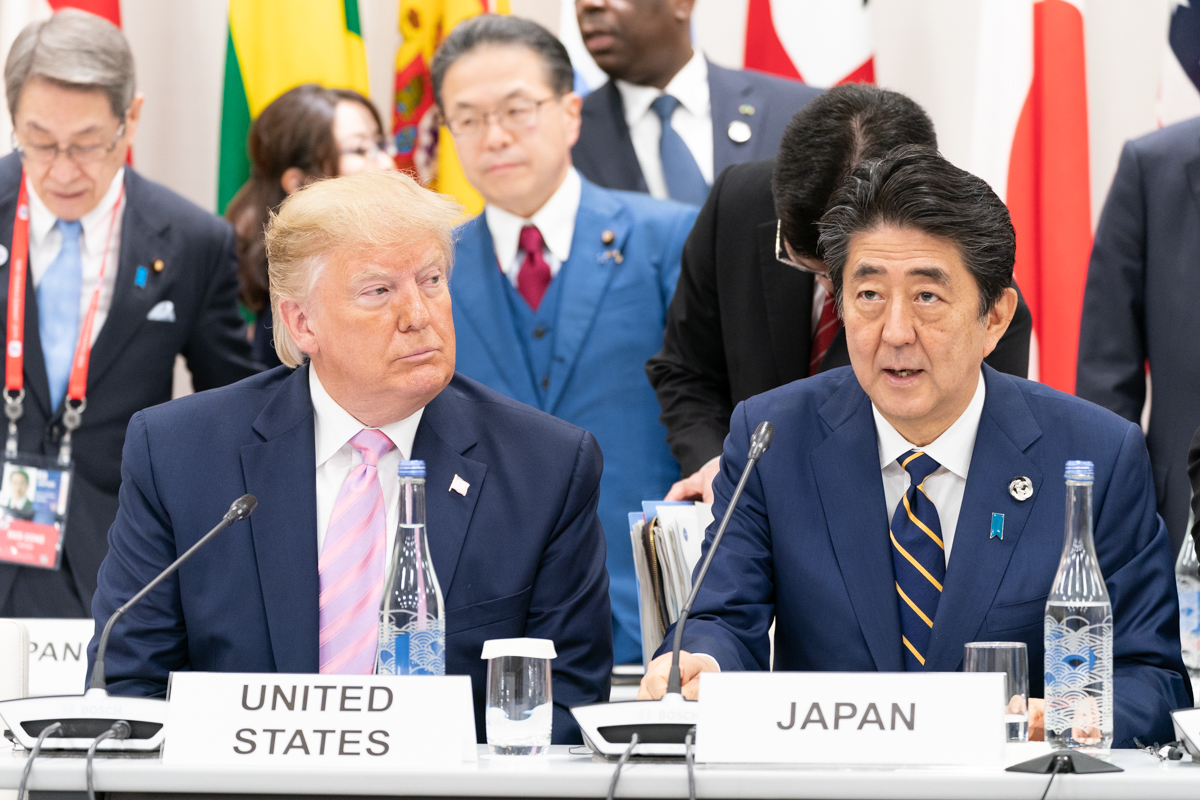 The Japanese are unlikely to have been amused, especially as the 1951 treaty was drafted by the victorious US to define the terms of the relationship with defeated-and-occupied Japan.

As Princeton University professor Gary Bass wrote in The New York Times, Trump’s ‘strategic cluelessness and historical ignorance… would disqualify a person from even a modest desk job at the State Department’. What Bass describes as Trump’s ‘ignorant, ungrateful and antagonistic’ approach might especially grate with Prime Minister Shinzo Abe whose maternal grandfather, prime minister Nobusuke Kishi, signed the revised security treaty in 1960. Abe has invested more heavily than any other world leader in cultivating personal relations with the now famously mercurial Trump.

What are the sophisticated, cultured, extremely polite but also increasingly edgy and flustered Japanese to make of this? Will they respond by doubling down on the alliance bet with the US, seek some manner of modus vivendi and accommodation with China, begin quiet preparations for an independent nuclear deterrent, or all of the above?

The rise of China increases the importance of the US–Japan security treaty. A healthy alliance with the US is insurance for Japan against North Korea and China. Equally, however, good relations with China are a hedge against an unreliable US ally in the future. The fear of abandonment by the US is a powerful and constant undercurrent in Japanese foreign policy.

Yet the stark reality is that Japan is the linchpin of the current and future security order in the Indo-Pacific and a critical component of the US rebalancing strategy for the region. Japan may be a declining power in the 21st century, but it still is and will remain for some time yet a ‘consequential power’. Abe was the first leader to introduce the conceptual vocabulary of a free and open Indo-Pacific as a way of integrating geography, geopolitics, democratic political values and freedom of navigation around the Indian and Pacific Oceans.

Speaking at a function in Washington in February 2013, Abe memorably declared that Japan was back: ‘Japan is not, and will never be, a Tier-two country’. With advanced military forces and an increasingly active approach to regional security, the most technologically advanced, richest and best educated country in Asia cannot be written out of any equation.

An unintended consequence of Trump’s weaponisation of tariffs and sanctions to prosecute proliferating US trade disputes is to increase Japan’s leverage at the intersection of international economics and global geopolitics. Japan’s large capital reserves, financial sophistication and technological cyber-resilience capabilities have been unexpectedly elevated in geopolitical importance.

In an interesting and important analysis on 22 April, Mike Bird of The Wall Street Journal drew attention to the fact that while China’s Belt and Road Initiative hogs the world headlines, Japanese private sector-led overseas investments are bigger than China’s (US $1.67 and $1.54 trillion, respectively, in the third quarter of 2018), more effective as tools of development, more high end in infrastructure investment, and tainted neither by suspicions of geopolitical motivations nor fears of debt diplomacy.

Rising tensions between China and the US also have put Japan in a uniquely privileged position vis-a-vis both. Beijing needs assured access to Japanese trade, investment and markets to offset reduced access to US markets. For its part, Washington cannot ignore Japan’s potential to check China’s growing ‘maritime, economic and technological influence’ in the Indo-Pacific region. In addition, Abe has worked hard and successfully to build personal and bilateral relations with Narendra Modi’s India and Vladimir Putin’s Russia.

The impact of Trump as disruptor-in-chief of the liberal international order and the Indo-Pacific order has to be assessed against this context. He is widely criticised for making decisions without the minimum groundwork having been done in advance by officials; for lack of experience, expertise and grasp of foreign affairs exacerbated by hollowing out of State Department capacity through rapid churn and unfilled positions; for a purely transactional approach that ignores critical cross-issue linkages to rob US foreign policy of strategic coherence; and for partiality to authoritarian strongmen and disdain for allies that has emboldened rivals, disheartened allies and confused potential friends.

At a time when the USA needs as many friends and allies as it can find to manage the challenge posed by China, those traits are endangering its long-term strategic interests in the Indo-Pacific – and in few places more so than in Tokyo.

Ramesh Thakur is emeritus professor at the Crawford School of Public Policy at the Australian National University.  This article is adapted from one that appeared on John Menadue – Pearls and Irritations.