From Floating Life to Open Homes: Exploring Cultural Exchange between Asia and Australia

ASEAN-Australia connections have been high on the political agenda in the recent years. Political, security, trade, education and development links have been formalised and growing. But where do cultural relations and co-operation between Asia and Australia stand?

What are some past and present modes and forms of cultural exchanges and collaborations, particularly from the context of Singapore and Southeast Asia? What roles do the arts and culture play in enabling meaningful dialogue and fostering mutual understanding? To stimulate a conversation around these questions, ASEF Unplugged-Singapore at The Projector brought together 3 main speakers with extensive experience and knowledge in facilitating cultural exchanges between the 2 regions, and 4 arts practitioners as panellists to render voices from the ground on what it is truly like to engage in cultural, geographical and sometimes political bridge-building in their daily work.

The resulting discussion, as summarised in the following key takeaways, proved to be thought-provoking yet vibrant:

1. Cultural exchange has become closely associated with the concept of soft power where, in the context of statecraft, the appeal and influence of ideas and information is instrumentalised as an alternative dimension to military and economic (i.e. “hard”) force. Internally, governments use culture to cohere culturally diverse societies and concretise national identity. Externally, governments use it to promote their nation’s cultural identity in the international arena, and to mark out their country’s distinction in the international marketplace. Invariably, therefore, the idea of soft power often means that artists and cultural representatives are selected and sent forth almost exclusively on the basis of excellence rather than other qualitative values. (?)

2. Culture, is more than a one-way push or a tool of the state – cultural exchange involves many processes and works at many levels. Because culture is central to the evolution of human values and identity, it is also extensively initiated by peoples and communities through cultural exchange. That is, while it may at times take place at the highest of levels of the state (e.g. for national security and statecraft), it often resides at the people-to-people level (e.g. to satisfy the desire for openness and mobility). In addition it is often guided by the philosophy that cultural actors and exchanges need not be defined by the history of the state, and that the forging of a different set of organic relationships is important for developing deep understanding, awareness, connection, and capability – from within.

3. Australia and Singapore rank a decent – though not outstanding – #10 and #21 respectively on the Soft Power 30 index. Both have a close institutional relationship with each other that spans over two decades, beginning with the first Memorandum of Understanding signed by Arts Victoria and the National Arts Council, Singapore in 1998 and more recently, the landmark joint Australia-Singapore film and television co-production agreement, which both parties signed even before either signed any similar agreement with China – the major cultural centre in the region. The Australian Singapore Art Group (ASAG, formed in 2018) is another clear indication of the investment to foster closer arts and cultural ties through potential co-creation of new work between the two nations. 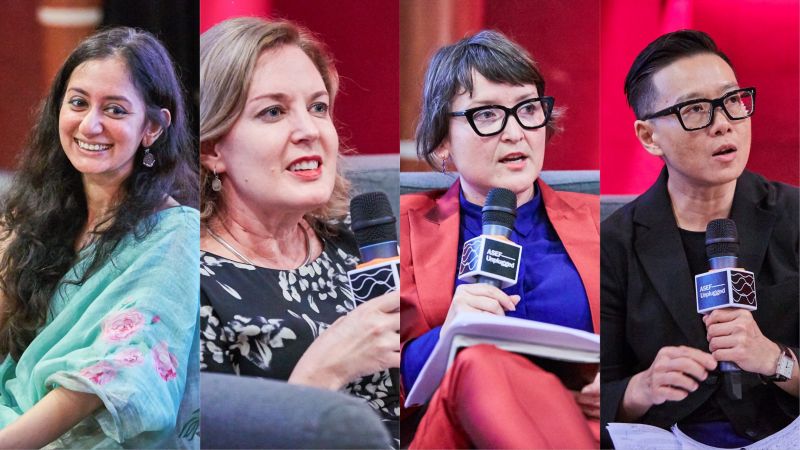 4. There are many good lessons to be drawn from the work being done in Australia and Singapore. In Australia, arts is increasingly seen as a driver of experimentation and public-facing communication, hence there has been a proliferation of events and platforms to engage and reach specific audiences through art. Investing in relationship-building, in an iterative and sustained manner, is imperative for trusted platforms for expression and engagement. In Singapore, most organisations are flexible, engaging, and open (i.e. there is a strong culture of hospitality and hosting characteristic of Southeast Asia in general). However, issues such as operational clarity, cost, and timelines continue to present challenges.

5. At the same time, the relationship between Australia and Southeast Asia, more broadly, reveals a confusing, mixed reality. Asialink Arts’ efforts in supporting 1,000 artists in 28 years (with one third being engagements in Southeast Asia) offers evidence of the depth, breadth, and multi-directionality of Australian engagement with Southeast Asia. However, while Australia is considered by many to be part of the same region, while its four biggest trading partners are Asian countries, and while at least half of the Australian community was born outside of Australia or had a parent born outside of Australia, Australia invests more in New Zealand than it does the whole of Southeast Asia. The level of Indonesian language learning in Australia is lower now than in 1972 (despite Indonesia being one of Australia’s closest geographical neighbours), and Asian Australians form less than 1.3% of those in the senior rungs of politics and business. In fact, there are only five Asian CEOs leading companies listed on the Australian stock exchange.

6. The relationship may appear confusing, but it presents many opportunities. Historically, there has been deep engagement even before the formal “arrival” of arts and culture as a component of soft power; this is a useful foundation to build upon. It was noted that a Department of Foreign Affairs and Trade statement cited a university student newsletter, written by students that came to Australia as part of the Colombo Plan, as being one of the earliest recorded forms of cultural diplomacy between Asia and Australia. Since then, international education both within and outside of Australia has held up as a prime example of the success of cultural diplomacy efforts. Presently, it has become increasingly common to see filmmakers (e.g. James Wan) and the like drawing on transnational networks and their diasporic advantage to amplify their work to international audiences – independently and without government support. Asialink, for one, serves as an alternative example of government-supported championing of arts and culture at the people-to-people level, which panellists cited as a viable and beneficial operating model. At the same time, panellists agreed that Australia does not leverage enough on the diasporic advantage of its people outside of the national framework – namely the vast social capital and networks that are brought to Australia and subsequently taken back to their home countries.

7. From an artistic point of view, cultural exchange implies and requires reciprocity. The discussion revealed that transference and exchange are insufficient, and that there needs to be a concerted shift towards collaborating on equal terms. Even within Australia, for instance, mainstream theatre struggles to reflect the diversity of the Australian people. Panellists affirmed that collaboration is about people, relationships, passion, and connections, and that for collaborations to work there has to be alignment of institutional interest, artist interest, and funding. While it is useful to think of an end product (funders usually fund tangible products, rather than intangible relationships), the process should begin from a desire to understand one another as people. Cultural diplomacy is not just about the presentation of works; it is more importantly about demonstrating what it really means to work together.

8. Arts and cultural practitioners share a common desire for their voice to be established beyond their local contexts. This takes deliberate collaboration, experimentation, and time, can only be enabled by longer-term investment and trust in their works and initiatives. Staying in one’s comfort zone is unsustainable in the long run, for there exists an innate motivation to have one’s stories reside in an international canon – not just, say, in the little ghettos of Asian or Australian festivals. It is of little surprise, however, that the arts infrastructure of today (along with what defines a good project) is often set or shaped by dominant cultures, with Asia and Australia often having to look to the West as a marker of excellence. Yet, because Asia is so heterogenous, Asian works tend not to fit neatly into Western categories, resulting in severe disadvantage in resources and opportunities. One way to improve this is to cultivate an ecosystem of cultural writers and critics who can interpret said works, in order to make them meaningful to outside audiences and help shift the conversation. Increasingly, seemingly small, localised problems that used to be ignored by many are now becoming more relevant to everybody regardless of national affiliation – this also presents an opportunity for arts and cultural practitioners to find common ground. In other words, more universally relevant the work is, the more likely it is to resonate – this entails a taking of one’s place in the world by first looking at each other, which is much more meaningful and impactful than always just telling the local stories one is expected to tell.

9. There is general agreement on the value that may emerge from “blind matchmaking” and experimentation by funders and agencies, yet an acknowledgement that the outcomes are inconsistent and sometimes incidental. While many random collaborations do not turn out to be effective, randomness can sometimes create the necessary conditions for a positive encounter to become fruitful. Beyond residencies and exchange programmes, there are many other examples of this in the context of Australia-Singapore cultural exchange, including the piggybacking of partners on each other’s activities, Australian scripts read in Singapore by Singaporean performers, Singaporean scripts likewise being read in Australia by Australian performers, original works co-written by Singaporean and Australian poets and playwrights – all of which demonstrate how far people-to-people collaboration can go, and how the outcome of said collaboration can be so different from and much more than the sum of its parts.

Recommendations by the audience

Toward the close of the discussion, members of the audience offered their views on cultural exchange between Asia and Australia. One member shared how the cultural heritage, friendships, and stories of humanity forged through Asia’s and Australia’s close cooperation in past wars could provide a rich foundation and resource for deeper cultural engagement and empathy. Another highlighted the shared importance of mental health issues and their potential to bridge common ground across geographies and cultures.

While the session helped to clarify a number of key issues surrounding the state and trajectory of cultural exchange between Asia and Australia, it also sparked new questions that will need to be addressed in the coming months:

ASEF Unplugged-Singapore at the Projector was held on 8 July 2019 from 7:30-9:30 PM at The Projector in Singapore and was co-produced by the Asia-Europe Foundation (ASEF) and the Cultural Research Centre, a newly-launched cultural research incubator based in the Department of Communications and New Media at the National University of Singapore, and featuring Asialink, Australia’s leading centre for the promotion of public understanding of the countries in Asia and Australia’s role in the region.

The session title From Floating Life to Open Homes: Exploring Cultural Exchange between Asia and Australia takes reference from two cultural texts from differing contexts and symbolises different forms of cultural exchange. Floating Life is a 1996 Australian film by Clara Law, a Hong Kong film director who relocated to Australia. Following the story of a Chinese family’s move from Hong Kong to Australia, the film explores the challenges of cultural relocation as well as issues concerning diasporic identities. Meanwhile Open Homes is a ‘theatre-in-the-home’ experience by Singaporean artist Jeffrey Tan. It differs from a static film like Floating Life as it welcomes audiences into the intimate home spaces of residents who act as both host and storyteller.

Speakers at ASEF Unplugged-Singapore at the Projector: