What are the regional implications of Brunei's recently approved Islamic criminal laws, known as hudud? Donald Greenlees counts the costs of this divisive new direction from the small ASEAN member state. 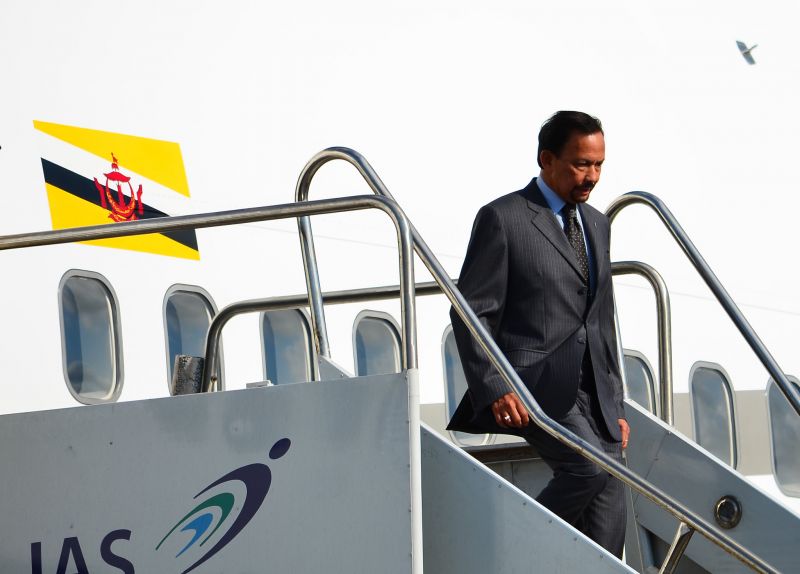 The Sultan of Brunei, Hassanal Bolkiah. Image by ASEAN 2013.

Malaysia’s prime minister in waiting, Anwar Ibrahim, was twice jailed for alleged acts of sodomy, spending 1999-2004 and 2015-2018 behind bars.  If he were found guilty of the same offence today in the neighbouring Sultanate of Brunei, he would be eligible to be stoned to death.

In line with archaic teachings, simple hanging is regarded as too lenient a punishment.  The preference is to drag the process out by hurling stones at the condemned.  Lesbians get off more lightly with only 40 lashes, presumably because this type of homosexuality is considered less offensive.

The new law, which the Sultan says is designed to “make Islamic teachings in this country grow stronger”, allows for punishment of other offenders, such as thieves, by amputation of limbs.  Blasphemy or insulting the Quran and the Prophet Muhammad also are punishable by death.  Penalties are supposed to be carried out in public.

Brunei’s embrace of hudud, which allows for severe penalties because the offenses punished are viewed as against God, poses a challenge to a Southeast Asia that professes to be modernising.  It sets a bad precedent for the erosion of human rights and liberties by other governments at a time when the Association of Southeast Asian Nations (ASEAN) insists it is elevating the priority it attaches to human rights.

It presents the risk of emboldening Islamic hardliners in neighbouring Indonesia, Malaysia and the southern Philippines.

In Indonesia, the LGBTQI community has been under growing pressure for some time, especially in strong Islamic regions, like Aceh.  Brunei sets a bold example of what they can aspire to achieve.

The Pan-Malaysia Islamic Party (PAS) for years has been pushing for the national parliament to adopt a bill that would permit hudud penalties to be imposed in its stronghold of Kelantan state.  The efforts gained some momentum as disgraced former prime minister, Najib Razak, sought allies to shore up his corruption-tainted government.  Even with the change of government in Kuala Lumpur, PAS still holds the hope of eventually getting such a law passed.

In the Philippines, a peace deal between Manila and Islamic militants on the island of Mindanao to establish the Bangsamoro Autonomous Region grants considerable religious freedom, including an Islamic justice system.  In time, as the Bangsamoro region finds its feet, it could take some cues from the Sultan on his throne at Banda Seri Begawan.

Brunei also faces some risks – further isolation as its only real source of wealth, oil and gas, is running out. The BP World Energy Outlook, predicts that will happen in 2035.  With the vast majority of its workforce employed by government – by some estimates 70-80 percent – the country is not well placed to generate alternative sources of income.

A global backlash over the hudud punishments could make the economic headwinds much stronger.  Celebrities, like George Clooney, Ellen DeGeneres and Elton John, have taken to Twitter to condemn the new law and called for a boycott of Brunei businesses.  These include the Beverley Hills Hotel and the Hotel Bel-Air in Los Angeles and the Dorchester Hotel in London.  Human rights groups have variously labelled the Sultan’s move “barbaric” and “vicious”.

But this should not be only a celebrity or NGO crusade.  Given the direct interests other ASEAN states have at stake in what the Sultan has done, it is time to prove that the rhetoric about ASEAN respect for human rights carries some substance.

The Sultan signed up to the ASEAN Human Rights Declaration in November 2012 at a leaders’ summit in Phnom Penh.  The declaration committed the 10 ASEAN states to a number of provisions of the universal declaration of human rights. The declaration vowed to uphold the principles of “impartiality, objectivity, non-selectivity, non-discrimination, non-confrontation and avoidance of double standards.  It was just a year later that the Sultan first proposed hudud penalties for sexual “crimes”.

At the time of the Phnom Penh declaration, the US State Department warned many of its principles and articles “could weaken and erode universal human rights and fundamental freedoms” enshrined in the universal declaration.  Of concern were clauses such as one that permitted states to limit human rights when these rights conflicted with “the just requirements of national security, public order, public health, public safety, public morality, as well as the general welfare of the peoples in a democratic society”.

While praising some clauses, the State Department criticised the “cultural relativism” of the declaration and the implication that “individual rights are subject to group veto”.

In light of Brunei’s actions, the weaknesses in the ASEAN declaration are glaringly apparent.  ASEAN leaders now need to quietly urge the Sultan to back down from his dangerous law and consider removing the loopholes in its human rights declaration.  They should do this because Brunei’s law has potential implications for the security of several of its neighbours who are trying to walk a delicate path between secularism and rising religious fervour.

It is clear that the Sultan is trying to win favour with devout Muslims among Brunei’s 420,000 people.  It is a political move that might never result in hudud punishment being carried out.  Brunei has long had the death penalty – the last execution was in 1957.  Moreover, the standards of proof under hudud are usually so high as to limit the likelihood of such punishment.

But this does not lessen the need for ASEAN to take a stand consistent with its own stated aspirations for a stronger, comprehensive regional human rights regime.  At the very least, the ASEAN Intergovernmental Commission on Human Rights, which held its latest meeting on 20-21 March in Bangkok, ought to put the Brunei law on its agenda when it next convenes in Jakarta in May if its mission is to be taken seriously.

If ASEAN does not act, the Commonwealth should.  The Sultan, the second longest serving monarch after Queen Elizabeth and one of the world’s richest people, values his diplomatic, military and commercial ties to Britain.

The next Commonwealth Heads of Government Meeting is not scheduled until next year. It was due to be held in Malaysia until the Najib corruption scandal derailed those plans.  It will now be held in Rwanda.  But Commonwealth countries need not wait until CHOGM convenes.  Leaders need to make it clear that the Sultan’s law is not compatible with Commonwealth values.

Donald Greenlees is a visiting fellow at the Strategic and Defence Studies Centre, ANU, and senior adviser to Asialink. The opinions expressed in this article belong solely to the author.