The riot on Capitol Hill might serve as vindication of Joe Biden’s claims that Donald Trump was ‘unfit’ for the office of President. But as John McCarthy writes, the damage to America at home and abroad will outlast the ‘national nightmare’ of the Trump era.

The events on Capitol Hill last week have met with outrage both because they happened and because Trump provoked them.

There has been hype – much from those who have sustained Trump these past four years – about invasion of the “hallowed halls”, an attack on “democracy itself,” sedition, insurrection and treason.

Well, yes, OK. But we could see the intrusion – or something like it – coming. Trump and his like had incited the mob for months and the Democrats had warned of it.

Moreover, political violence is not new in America. Witness Kent State and other episodes during the Vietnam War, the brutality of the civil rights years and ongoing manifestations of racial hatred since, including last year. Remember the murders of the Kennedys and Martin Luther King. And guns.

The real importance of the Capitol events is that they bring home with shattering clarity two things.

First, the events underline very visibly that the schism in the American polity is the most serious since the Civil War.

Moreover, while the Republicans are diminished and Lincoln’s “better angels” may once again be in the ascendant, some polls suggest that as many 35 percent of the American electorate believe that the election was rigged. This is hardly a recipe for national reconciliation.

The ongoing schism establishes beyond doubt that Biden’s most desperate priorities must be internal. And that is without COVID-19. Almost 4000 Americans – the highest daily figure yet – died from it the day the Capitol was trashed. 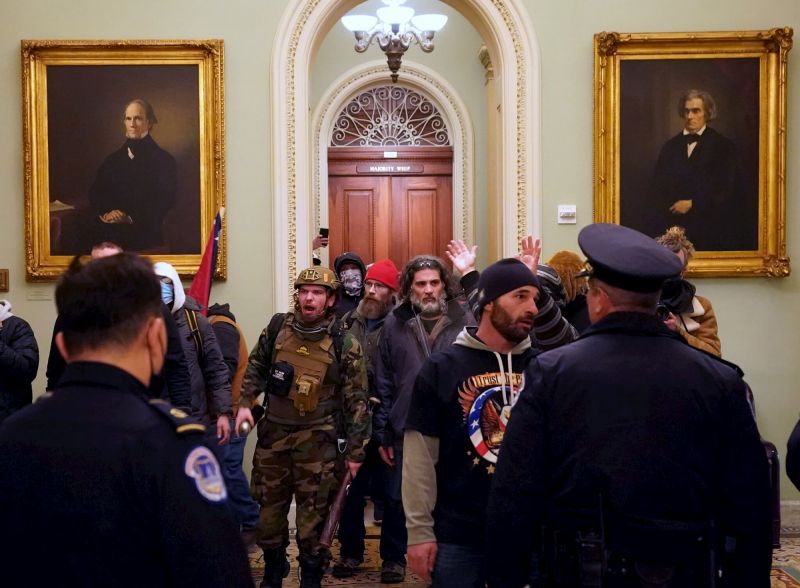 The schism raises the question of whether a country so bitterly divided can be an effective global leader. Its system is seen to have failed. It is perceived as at war with itself.

This observation leads to the second point. America’s international reputation has tumbled mightily.

Defining reputation in international politics has become an industry. However, at its simplest, reputation relies heavily on soft power as defined by its main theorist, Professor Joseph Nye. The latter who postulated a generation ago that soft power derives from a nation’s culture (in the broad sense), its political values and its foreign policies (aspects of which are reliability and trust).

When Nye developed his theories, they carried significant weight. United States soft power played a major part in the demise of the Soviet Union and contributed to American unipolar authority, an authority which lasted for more than a decade.

However American reputational strength was eroded by some of its reactions to 9/11, particularly Iraq, by its management of the Global Financial Crisis, and by perceptions of weakness in dealings with Russia (in Ukraine and the Middle East), and with China (in the South China Sea).

By about 2015 the brave new world that had been attracted to the American democratic brand had become less enthusiastic. Some NATO allies, such as Poland and Turkey, moved in undemocratic directions. Democratic values were under threat in India. Western aspirations for greater democracy in Southeast Asia had – with the exception of Indonesia – not been fulfilled.

All this happened as the rise of China recreated a bipolar world.

With these two strikes against him, Biden can still be assured that on his main external challenge, China, there is a large measure of bipartisan political alignment in the United States.

However, both on China and other international issues, Biden will still have to face up to the international perception that the United States is a lesser country than when he was Vice President.

In the pre-and-post 9/11 periods, NATO countries, albeit with differences on Iraq, tended to toe the American line. After four years of Trump, they are less inclined to do so.

This tendency was apparent when the EU, with Germany and France as prime movers, recently concluded an economic agreement with China, despite cautions from Biden’s nominee for Secretary of State, Antony Blinken.

And in seeking to strengthen ties with India and Southeast Asia, the United States will have to show a balance between pursuit of its strategic interests and an insistence on adherence by its partners to its governance and human rights norms. What right, many will think, has the United States to tell us how to behave?

Vice President elect Harris has already indicated discomfort with Prime Minister Modi’s discriminatory policies against Muslims in India. The actions of governments in Thailand and the Philippines in coming months are likely to invite scrutiny.

The America of two decades ago could ensure that its strategic and value related interests could be pursued in unison. This administration will not have the same advantage.

At his inauguration Biden may well wish to echo the words of President Ford ‘s inaugural speech after Watergate that “our long national nightmare is over”. Such optimism would be excessive. Biden was always going to have a hard row to hoe. The events in the Capitol have made it harder.

John McCarthy AO is Senior Adviser at Asialink and former Australian Ambassador to the US.

This article appeared in the Australian Financial Review on January 11, 2021.