The presidential election in Timor-Leste could pave the way for a new generation of leadership writes Michael Leach. But first it faces a challenge to political stability.

The first-round of the presidential election in Timor-Leste this coming Saturday exposes two fundamental competing trends in national politics.

On one hand, the broader field of candidates in 2022 reflects new dynamics in Timorese politics, with four strong women candidates, including the current Deputy PM, Berta dos Santos, and a host of younger contenders.

On the other, the contest for head of state appears to be dominated once again by the 1975 generation of male politicians, and the continuing influence of military veterans in the political landscape. And depending on the outcome, the relationship between the president and the government could again become a focus for political stability.

This Saturday, 16 candidates will face off for the presidency, with a runoff round of the top two finishers held on 19 April if no candidate receives a first-round majority. As ever, the front running candidates are generating huge and colourful rallies across the country as the campaign progresses. Remarkably, these are coordinated by the National Election Commission to prevent major overlaps of followers. Regularly assessed the most democratic country in Southeast Asia, the dynamism of Timor-Leste’s democracy is something to behold.

Candidates for president run formally as individuals, although they may be members of political parties and receive party support for their campaign. In Timor-Leste’s semi-presidential system, the President is instrumental in appointing the government following parliamentary elections, as well as dissolving parliament when necessary. Other significant powers include a partial veto over legislation, a complete veto over executive decree laws, and the right to send laws for constitutional review. While the President has no responsibility for specific policy areas, the directly elected mandate also brings considerable public influence in the manner of a ‘bully pulpit’. 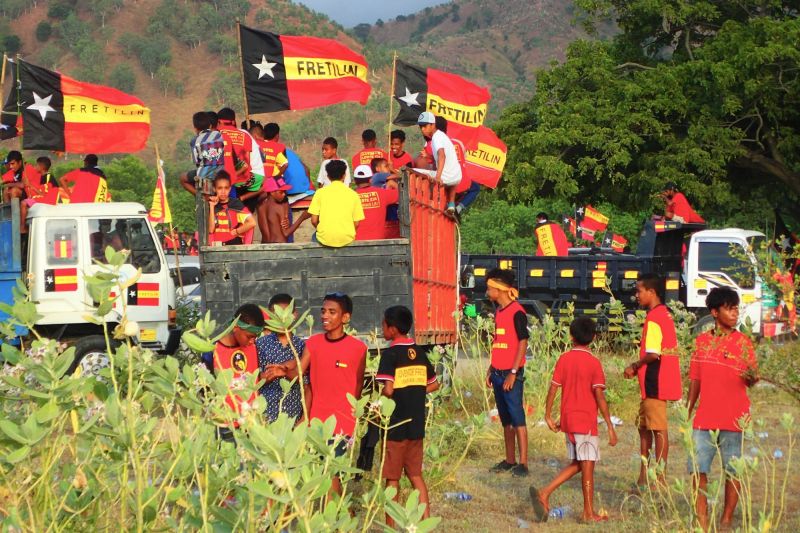 The broader field of candidates in 2022 reflects new dynamics in Timorese politics, with four strong women candidates. They include Berta dos Santos, whose party KHUNTO — a member of the current governing alliance — enjoys a growing support base among non-elite rural voters. Other new entrants to the political scene also are making their mark without running candidates. A new party, Patifor, led by Gregorio Saldanha, a key organiser of the historic Santa Cruz protest in 1991, has weighed in behind Ramos-Horta. And a new Green party has backed Lu Olo. One of the great unknowns of this presidential race is who the 20 percent of first-time voters will support.

Nonetheless, the 2022 elections still see the older 1975 generation at the centre of national politics. Indeed, some younger presidential candidates — several of whom were associated with the clandestine resistance to the Indonesian occupation in the 1990s — are openly staking ground in this campaign for 2027.

As these green shoots of generational change emerge, there is a strong probability that these will be the final elections dominated by the 1975 generation of political leaders like Gusmão, Mari Alkatiri and Ramos-Horta. The major significance of this year’s presidential elections and the coming parliamentary elections, which will determine the next government, may lie in this intergenerational moment, marking a major chapter as the nation approaches 20 years since the restoration of independence.

While presidential power has frequently been underestimated, executive power nonetheless lies overwhelmingly with the prime minister and cabinet. The core of the political tensions in Timor-Leste over the last few years lie in standoffs between these two elements of the ‘divided executive’: the president and the executive government. In many ways the 2022 presidential campaign is a proxy battle for the more important parliamentary election to come. This is currently scheduled for 2023 but could come earlier.

The CNRT has long accused President Guterres of acting unconstitutionally in not appointing a host of CNRT ministers after a CNRT-led coalition won the 2018 elections. Guterres was not the first president to refuse a ministerial nomination, although he did it on a substantially greater scale, citing judicial inquiries into misconduct or “poor moral standing”. While the President argued he was protecting the integrity of Timor-Leste’s democratic institutions, the CNRT saw it as an attempt to thwart the government. 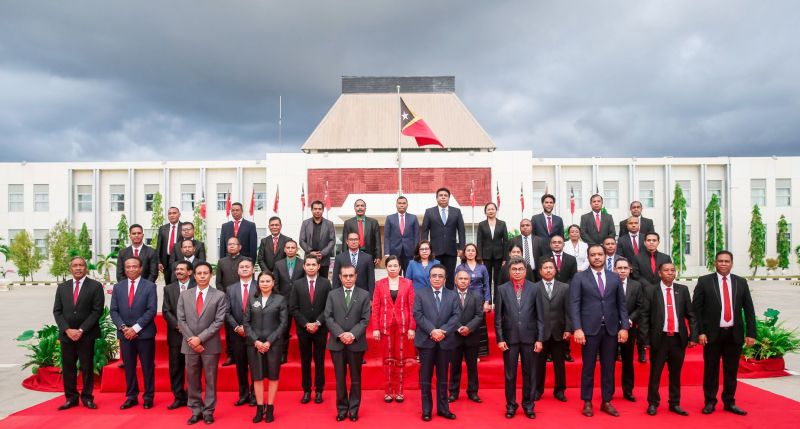 Swearing in ceremony of the new members of the VIII Timor-Leste Government, Dili, Timor-Leste - June 3, 2020. Image credit: Office of the Prime Minister of Timor-Leste.

In early 2020, Gusmão launched a risky strategy to force a new election, rejecting the budget of his own alliance government, which embarrassed his alliance partner, the Prime Minister and PLP leader Taur Matan Ruak, and saw their governing coalition collapse. The CNRT were unhappy that Guterres did not immediately accept Ruak’s resignation and delayed appointing another Gusmão-led majority as COVID-19 hit. This new alliance later collapsed too, allowing the President to remodel the existing 8th government to include the largest party, Fretilin, which gave parliamentary support to Ruak’s government and took a large share of ministries. The resulting PLP-KHUNTO- FRETILIN government has been in place since early 2020.

CNRT took the matter to the Court of Appeal, which refused to review the constitutionality of presidential executive discretions in the absence of a formal impeachment by parliament, which requires a two-thirds majority of MPs. In effect, this means presidents have a wide political discretion, for which they are primarily accountable to the public at the ballot box.

The CNRT also claims the current government is “illegal” and argues the Fretilin president of national parliament (PPN, a position akin to the speaker in the Australian system) is there illegitimately, though the Court of Appeal in this case explicitly ruled that parliament controls its own procedures, and that the PPN ought reflect the current majority.

CNRT now demands the dissolution of the current parliament and an early parliamentary election. It has made this a “condition” of its support for Ramos-Horta. Many in Timor-Leste worry that this course of action could drive further tensions between the parties and inflame rather than calm the political impasse.

But this is not necessarily how things would play out in the event of a Ramos-Horta victory. Another course of action — less constitutionally vexed and with fewer political risks for a new president — would see the new president reconfigure the current parliament. In the event of a Ramos-Horta victory, it is possible that the current parliamentary alliance between PLP, KHUNTO and Fretilin could come under serious pressure.

All this demonstrates the proxy nature of the current presidential battle. While a win for Lu Olo would likely solidify the current governing alliance in the parliament, a strong victory for Ramos-Horta could easily destabilise it.

This in turn has clear implications for the current government. Despite a strong performance managing COVID from 2020-21, rumblings of popular dissatisfaction with bureaucratic inertia and a lack of policy direction on issues including flood management, regional services and capital expenditure could see a strong voter turnout in 2022. In opposition for the past two years, Gusmão has been using his considerable campaigning skills in the countryside non-stop and has valuable support in powerful church circles as well. These factors could easily combine in the form of pressure on the parliamentary alliance after the presidential election. With rumours that PM Ruak wants a major reshuffle of ministries after the election in any event, the solidity of the current alliance will be closely scrutinised. 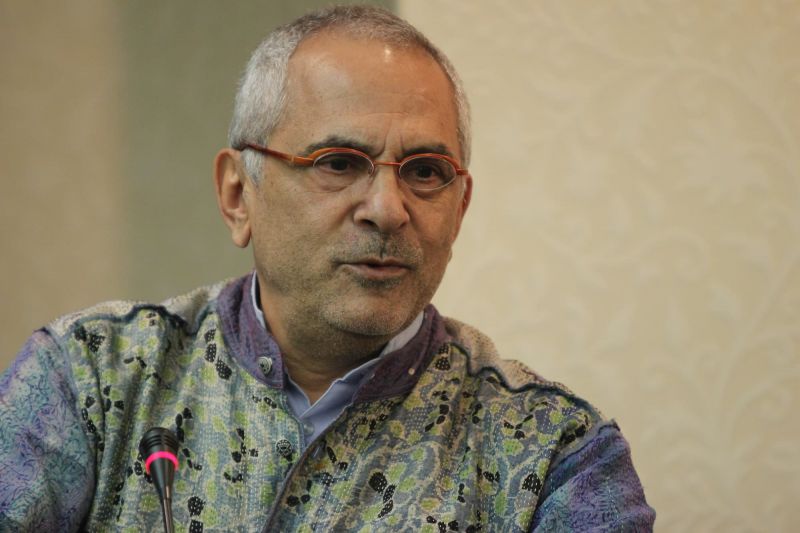 Meanwhile, the presidential campaign has become increasingly heated. In response to the CNRT campaign against President Guterres, Fretilin leader Mari Alkatiri has resurrected charges of unconstitutional conduct in office against Ramos-Horta dating back to 2007.

Last week, a rare poll conducted by the national university found Ramos-Horta in front with 39 percent of the vote, followed by the two Fretilin candidates, with Lere marginally in front of the incumbent Lu Olo. Performing creditably were the Democratic Party candidate Mariano Sabino, followed by Berta dos Santos. A remote, though conceivable, possibility is that the spilt in the Fretilin vote could open the door to one of these candidates finishing second.

CNRT confidently claim Ramos-Horta will prevail in the first round. While this is certainly possible, with the two Fretilin candidates virtually guaranteed 25 to 30 percent of the national vote, and 13 other candidates in the race, a second-round runoff remains a likely outcome.

The dynamics of second round races are different, as the remaining two candidates seek the endorsement of eliminated first round candidates. If he does not win in the opening round, Ramos-Horta may need to tread cautiously between his CNRT backers, and the smaller parties in the current government alliance, unlikely to embrace the idea of an early dissolution of parliament.

Alongside ongoing tensions within the semi-presidential system, the 2022-2023 presidential and parliamentary elections also pose the wider question of when the next generation of leaders take over the more established parties in Timor-Leste. For Fretilin, the moment appears to be upon them already, as major divisions trouble their presidential campaign, and an internal leadership challenge looms later this year. In many ways, the opposite problem pertains in CNRT: there is great unity behind Gusmão, but the party still lacks a clear second line of leadership. How these dynamics play out will be seen over the next five years and will have huge implications for the party system.