As Malaysia stumbles through another political crisis that could bring down the government any day, Professor James Chin argues the country faces a deeper challenge – the decay of the Malay political establishment. The only way out is power sharing that recognises Malaysia’s reality as a multi-racial, multi-religious society.

As you read this, Malaysia is undergoing a political crisis that few would have predicted just a year ago. To recap, in February 2020, a “backdoor government” was established under Prime Minister Muhyiddin Yassin.

In this power grab, there were several key political-party actors. The new Perikatan Nasional (PN) government was a coalition that consisted of the three most important political parties promoting Malay-Muslim nationalism: the United Malays National Organisation (UMNO), which had dominated politics for decades, the nativist Parti Pribumi Bersatu Malaysia (Bersatu), and Parti Islam Malaysia (PAS), which favors strict adherence to Islamic law. Indeed, all three parties unashamedly adhere to the ideology of Ketuanan Melayu Islam or Malay Islamic Supremacy.

The previous Pakatan Harapan (PH) coalition government of Mahathir Mohammad suffered from a widespread perception that it was too heavily influenced by the Democratic Action Party (DAP), the largest Chinese party in Malaysia. This led directly to the tensions that eventually prompted the fall of the PH administration.

The PN government, on the other hand, was unique in that it did not initially have any representatives from the minority Chinese and Indians. This was the first time in Malaysia’s political history that the minorities were not given a seat at the top table. Hence, most of the Malay establishment were looking forward to a long period of Malay hegemony and political stability.

But as we now know, this did not happen. Last month, UMNO formally signalled that it was no longer supporting Muhyiddin and wanted him to resign. This was in anticipation of the August 1 lifting of emergency law orders, imposed in response to the COVID-19 pandemic. For the most part, Muhyiddin ignored UMNO and promoted a split within UMNO by supporting a faction to go against UMNO’s president. For a while Muhyiddin looked strong but an intervention by the King turned everything upside down.

On July 29, the King, a constitutional monarch, issued an unprecedented statement accusing the law minister of misleading parliament and the attorney-general Idrus Harun of failing to honour a promise to allow parliament to debate the annulment of the emergency ordinances. There were immediate calls on Muhyiddin to resign for being disloyal to the palace.

Two UMNO members of the cabinet, the minister of higher education and the minister of energy and natural resources, resigned after UMNO announced that it was immediately withdrawing support for Muhyiddin in light of the King’s statement.

Muhyiddin refused to resign, went to see the King on August 4, and told him that a confidence vote would be called in early September to prove that the government still commands a majority. Despite Muhyiddin’s defiant tone, it is almost certain that he has lost his two-seat majority in parliament. 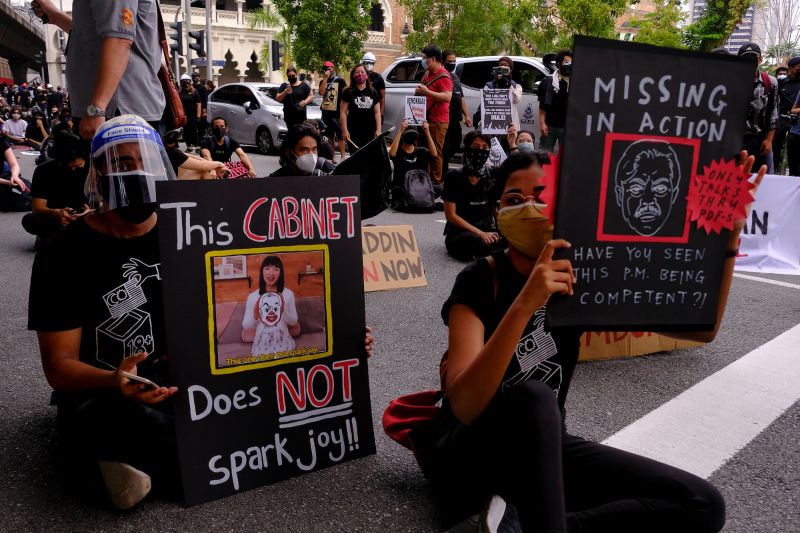 All this is happening amidst a background of COVID-19 spreading unhindered throughout the country. In the past week, Malaysia has suffered its highest recorded number of new infections and deaths. As of August 8, Malaysia had recorded more than 1.24 million cases and 10,400 deaths. There is a mad rush to vaccinate the country’s 32 million people, including allowing all GPs to charge for vaccination. The multiple rounds of movement control orders (MCO), as shutdowns are called in Malaysia, has led to many households, including those in the middle class, asking for food aid. People, especially the young, are calling for black flags to be flown as a signal for the government to resign. A planned march to parliament was stopped by the police.

But all this means nothing to the Malay political class.

The political class is concentrated on one thing only – horse trading to see who can get the numbers to form government. Government supporters are allegedly offering up to MYR 30 million ringgit ($9.7m) for opposition MPs to defect.

On the opposition side, despite a clear chance to dislodge Muhyiddin from office, MPs can’t seem to get their act together. Mahathir and Anwar Ibrahim, the two most well-known PMs-in-waiting, are subtlety challenged by two newcomers: Shafie Apdal and Ismail Sabri. Both are relatively unknown outside Malaysia. Shafie is the president of Warisan, a regional party based in Sabah, while Ismail is the incumbent deputy prime minister. Even Tengku Razaleigh Hamzah, the oldest MP in the house, is putting himself forward as an “interim prime minister”. In other words, if the opposition cannot unite under one candidate, there is every likelihood that Muhyiddin will survive the confidence vote or may even get to run a minority government, as he is doing now.

Mahathir is hoping that if MPs cannot agree on who should succeed Muhyiddin, he will be the compromise candidate who can served as PM until the next election. There is only a slight chance this will happen as many blame him for the mess Malaysia is now facing. If Mahathir had not resigned suddenly in February 2020, then the Muhyiddin administration would have never existed.

Anwar, who has been claiming since last year to have the numbers, is in an even more precarious position. The Malay establishment do not trust him. They think he is “too liberal” and “too close” to the Chinese-DAP. Many young Malay activists think he has lost his zeal for reforms in pursuit of the prime ministership.

Truth be told, many young Malaysians think both Mahathir and Anwar should leave the political scene as their time has passed. Most of them think its time to skip to a new generation of political leaders because the present generation of leaders have failed.

But reporting on Malaysia’s current crisis neglects two important points. First, one of the abiding myths of Malaysian politics is the belief that as long as the Malays hold power, the country will be stable. PN is as Malay-centric as you can get. The problem is that there are two strong Malay parties in government – UMNO and Bersatu – that are each trying to politically kill off the other to became the only dominant Malay party in Malaysia. The Malaysian system can only afford one dominant Malay party in government at any one time. Until this is resolved, there will be political instability.

Second, nobody wants to talk about Malaysia’s largest party in terms of MPs. The title belongs to the DAP with 42 MPs in the 222-seat parliament. Yet it is neither consulted nor its views taken into account in the current political showdown. Why? Because it is a Chinese-based party promoting secularism and multiculturalism. The Malay establishment is so profoundly committed to the racist ideology of Ketuanan Melayu Islam that it cannot concede the creation of the PN government in 2020 was a mistake. The establishment’s greatest fear is a facture at the highest levels of the Malay elite which would give the DAP a chance to form a government with a major Malay faction. This is a real possibility if the conflict between UMNO and Bersatu spins out of control.

The truth is, right now, nobody knows. The Malay establishment knew a crisis was coming but was hoping desperately for a deal to maintain the status quo until the next general election, due in 2023. The King’s unexpected intervention suggests that a faction within Malaysia’s nine royal families – one of the most important behind-the-scenes political players and pillars of the Malay establishment – wants Muhyiddin and PN replaced. Who they might support is still not clear, but they are definitely not in favour of Mahathir.

Another elusive pillar of the Malay establishment, the Malay tycoons and businessmen, are not too happy with Muhyiddin either. The Malaysian economy is not doing well and they are unsure Muhyiddin’s finance minister can restart the economy.

The most important pillar of the Malay establishment, the senior civil servants, senior police and military officers, and senior Malays helming government-linked companies and statutory bodies, appear to be completely split. Some of them want Muhyiddin out, while many want a return to UMNO rule using the model of the old Barisan Nasional (BN) coalition that had UMNO as its core. The BN ruled Malaysia uninterrupted from independence for six decades before it was defeated in 2018. The secret to the BN model was simple: all ethnic and minority groups were encouraged to join, but there could be only be one Malay party – UMNO. Although everybody was given a seat at the top table, UMNO was first among equals.

In summary, the Malay political establishment is in a state of decay. The ideology of Ketuanan Melayu Islam cannot unite the Malays at the top anymore. Controlling all the levers of power in Malaysia looks good on paper, but it is hard to implement. The reality is that Malaysia, no matter how much you try to hide it, is a multi-racial, multi-religious society. Creating a one-race, one-religion government was never a good idea. Until the Malay establishment accept this reality, Malaysian politics will continue to decay until it reaches a point of no return.