The value of personal diplomacy was on display in the Morrison-Modi Summit last week – quickly dubbed ‘the ScoMosa’ summit after some culinary Twitter banter between the leaders.  But as emeritus professor Ramesh Thakur writes, the virtual dialogue had great substance, paving the way for closer bilateral relations against the backdrop of a more aggressive China and less reliable US.

On 31 May, Scott Morrison shared images of home-cooked samosas with Indian Prime Minister Narendra Modi, calling them ScoMosas on his Twitter feed. Skilled at repartee, Modi tweeted back: ‘Connected by the Indian Ocean, united by the Indian Samosa! Looks delicious, PM @ScottMorrisonMP!’.

While ‘ScoMo’ is one of Morrison’s nicknames in Australia, ‘NaMo’ is a popular name for Modi. ‘ScoMosa’ cleverly connects the two PMs. The humble samosa is a popular, inexpensive snack as an accompaniment to the ubiquitous garam chai (hot tea). It’s available at every station as trains pull in and at one time a young Modi was helping his father sell tea at railways stations. So, kudos to Morrison for this clever marketing gimmick. 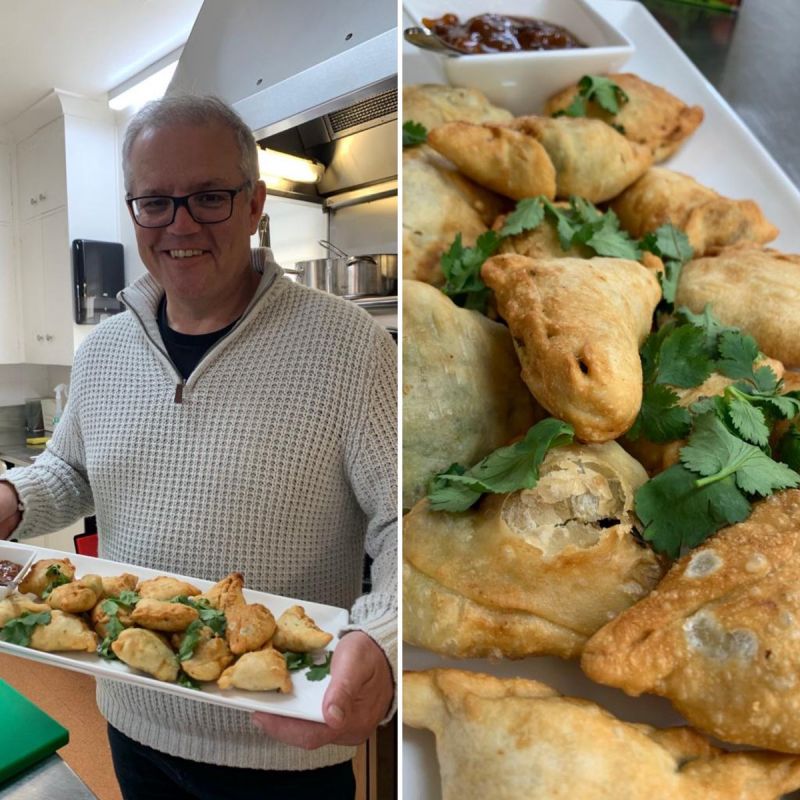 The Twitter exchange paved the way for their virtual summit on 4 June, Modi’s first virtual bilateral summit. The danger was that the outcome of the summit would be as insubstantial as a samosa-and-chai snack as the two nations pass each other at a wayside stop. In fact, they came up with quite substantial fare.

The Regional and Global Context

Second, both countries have entered a recession in the economic fallout from the coronavirus pandemic, although India has been hit much harder by the disease, and death rates are still climbing. According to industrialist Rajiv Bajaj, the lockdown has ‘decimated the economy’ and ‘flattened the wrong curve. It is not the infection curve, it is the GDP curve’.

Third, both Morrison and Modi are experiencing continuing strife with China. Deft diplomacy is not Morrison’s strong suit. For reasons that remain obscure, he decided to call for an independent international inquiry into the origins of the virus and poured petrol on the fire by invoking the spectre of weapons inspectors in Iraq as the model. China retaliated with aggressive rhetoric and de facto sanctions on imports of Australian barley and beef.

India’s difficulties with China are different in both nature and order of magnitude. Neither side has forgotten India’s humiliation in the 1962 border war. The 3,500km contested border still flares up periodically with stray and isolated incidents, for example in Doklam in 2017. The present flare-up in Ladakh is different. It’s not an isolated incident but a series of clearly coordinated intrusions in many places by a beefed-up Chinese military presence. They fit into a larger pattern of bellicose rhetoric from China’s wolf warrior diplomats around the world and more overtly aggressive postures regarding Hong Kong and Taiwan. China has presented India with an unpalatable choice, as Happymon Jacob puts it, between quietly acquiescing to the fait accompli or seeking to reverse it by force or negotiation against an adversary with superior conventional military firepower and economic assets.

The fourth contextual element is Australian and Indian relations with the US. The importance of personal chemistry between leaders is too often neglected. Modi, Morrison and US President Donald Trump seem to have a close personal rapport. All three are plain speaking outsiders in their countries’ cultural-political elites. Conversely, it’s hard to visualise chemistry between these three and Canada’s Prime Minister Justin Trudeau, or between Malcolm Turnbull and Modi or Trump. The ‘Howdy, Modi‘ event in Texas last September and the return ‘Namaste, Trump’ mega-rally in Gujarat this February were mutually helpful in US and Indian domestic politics. 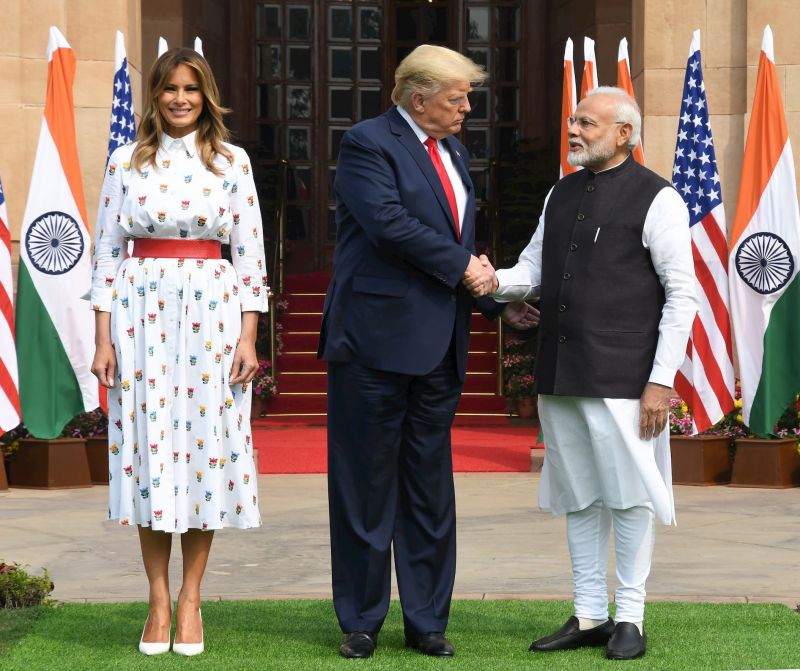 Trump has used his privilege as this year’s host to invite both Modi and Morrison to the G7 summit in September, along with Russia and South Korea. Neither can afford to insult the volatile Trump by refusing, but both will need to be mindful of the fraught and febrile atmosphere within two months of the presidential election that’s shaping up to be among the most fiercely contested in US political history. The cheese in this mousetrap is a global platform alongside the world’s most powerful leaders.

The seven bilateral agreements approved during the Morrison-Modi summit cover cooperation in healthcare and trade and defence.  This stepped-up cooperation sits within a larger Comprehensive Strategic Partnership that covers defence and maritime security, cyber-security and technology, science and research, and critical supply chains.

From research cooperation to improving the performance of the World Health Organisation, and sharing information about pandemic control, the coronavirus was central to the discussions. As countries prepare to end overdependence on China for critical medical supplies, the post-COVID-19 world will offer India a long-term opportunity to play a larger role in revamped global supply chains, expand its manufacturing base and become the pharmacy to the world. Modi and Morrison committed to collaborative research to promote innovative solutions for responding to and treating coronavirus. ‘The world needs a coordinated and collaborative approach to get out of the economic and social side effects of this epidemic’, Modi said afterwards.

Asia is a congested and contested geopolitical space in which both Australia and India are consequential middle power players. This is particularly true in the context of recently assertive Chinese behaviour amidst the growing sentiment that the US imperium is receding, if not imploding. Against the backdrop of Trump’s unilateralism and erratic behaviour, the presence of strong middle powers in the Indo–Pacific region acts as a stabilising and reassuring force. The two countries’ security strengths and weaknesses overlap with respect to manpower, professionalism, technological sophistication, air-sea gaps, intelligence sources and analyses, etc. Modi described deepening bilateral relations as a ‘factor of stability’ for the Indo–Pacific region and the world.

Because India has perceived itself as a great power in the making and acted as such, it has habitually neglected the importance of Australia as a consequential middle power in the Indo–Pacific. Australia’s primary challenge has been to balance its US security alliance and trade relationship with China, while India’s main challenge is how to balance China’s rise without compromising its strategic autonomy. Neither holds expectations of military help from the other in the event of hostilities with China. India looks to a multipolar order in the Indo–Pacific within the overarching global framework; Australia is still invested in US primacy in the Pacific. Until now their respective bilateral relations with China have been more important than with each other. That may just be on the cusp of change as the rush of aggressive Chinese statements and acts strengthens the geopolitical logic of a quadrilateral partnership, but not alliance, between Canberra, New Delhi, Tokyo and Washington. As the China–US relationship pivots from potential partnership to full-spectrum strategic rivalry, of all the countries in the world, India can make the most difference to the balance of influence and advantage in the new cold war. Equally, the growing list of irritants in relations with China is forcing Canberra to contemplate alternatives as serious partners around the region and India stands out as an obvious choice.

The Mutual Logistics Support Agreement, finalised at the 2+2 dialogue between the two countries’ defence and foreign secretaries (to be elevated to the ministerial level) in New Delhi in December, will permit their militaries to use each other’s bases, supply lines and refuelling and maintenance facilities. This will be particularly valuable for maritime activities, such as patrolling the crucial international waters of Southeast Asia.

India and Australia commenced their first bilateral naval exercise ‘AUSINDEX’ in 2015 which was focussed at deepening defence and maritime cooperation around the Indian Ocean. The exercises have steadily grown in complexity and by all accounts both navies are enthusiastic about the experience.

The Quadrilateral Security Dialogue was initiated by Japan in 2007 and revived in 2017. Although quiescent of late, it enhances scope for diplomatic cooperation on regional and global issues, for example building resilience against climate change and natural disasters as after the 2004 Boxing Day tsunami. Retired Air Marshal M. Matheswaran points out there is also growing scope for air power cooperation with a steady build-up of expeditionary capabilities by the Indian Air Force. The two air forces can coordinate to monitor the chokepoints in the eastern Indian Ocean as well as counter-terrorism and anti-piracy operations.

Trade and Investment in Goods and Services

​Morrison now has the opportunity to ensure the government’s India Economic Strategy, written two years ago by a former secretary of the Department of Foreign Affairs and Trade and High Commissioner to India Peter Varghese, isn’t consigned to a dusty shelf. It becomes clearer with each passing year that Australia and India share a vision for open, free, rules-based multilateral systems in the Indo–Pacific region and globally, with medical and pharmaceutical supplies now included on the list of critical items to be covered by cooperative multilateralism.

The agreements will help to build functional redundancy into both countries’ critical supply lines, in particular of medical equipment and pharmaceutical products. The pandemic has exposed the vulnerability of these to manufacturing locations in China which can become hostage to geopolitical tensions. Australia can supply India with seven critical minerals, including cobalt, lithium and rare earth elements, to support Modi’s ‘Make in India’ campaign in new and emerging technologies. For Australia, this will ensure diversified supply chains less dependent on an unreliable China. There’s also no better market than India to take up the slack in falling enrolments of Chinese students at Australian universities.

Bilateral ties are underpinned by shared geography, interests and values. While Modi said of the ScoMosa Summit that now is the ‘perfect time and perfect opportunity’ to further strengthen the relationship, Morrison said it’s time for India ties ‘to go broader, deeper’.

Whether the present rhetoric translates into a lasting relationship based on reciprocal long-term commitment will depend more on India than Australia. In six years as prime minister, Modi has frittered away the political capital of two powerful electoral mandates on pet projects of divisive cultural-religious nationalism while neglecting major economic and governance reforms. India continues to drift rudderless on the tide of history instead of bending its arc to the destination of choice. The demonetisation decision of 2016 and the last-minute loss of nerve on the Regional Comprehensive Economic Partnership were acts of wilful self-harm.

On 19 April Modi exhorted India to rise to the occasion and become ‘the global nerve centre of … multinational supply chains in the post Covid-19 world’. US, European and Japanese companies could be courted, but only if India is prepared to act decisively on reforms. According to Modi: ‘Our government has decided to view this crisis as an opportunity. In India, a process of comprehensive reforms has been initiated’. Unfortunately, he has a long record of over-promising and under-delivering.