The future of South Korea's foreign and security policies hinges on the outcome of presidential elections in 2022. This, writes Kuyoun Chung, will determine how Seoul juggles a range of potentially conflicting priorities – nuclear disarmament and peace on the Korean peninsula, a reinvigorated alliance with the US, and stable relations with China.

With a few months left before South Korean President Moon Jae-in’s term ends in May 2022, his government is relentlessly attempting to revitalise the now-stalemated denuclearisation dialogue with North Korea. In particular, President Moon is continuing to call for an end-of-war declaration as a way of building trust between North Korea and the United States, starting a denuclearisation dialogue, and eventually developing a peace regime on the Korean peninsula. Critics fear such a declaration might undermine the ROK-US alliance and thwart the international sanctions that penalise the North’s nuclear weapon development program. However, both the US and North Korea show no interest in this declaration anyway as they disagree over the terms of starting a dialogue to begin with. The US will consent to neither economic sanction relief for North Korea nor any suspension of ROK–US joint military exercises, which the North demands as a precondition for discussing the declaration. Moreover, as long as the US perceives North Korea as a deterrable threat, it will focus more on its near-peer competitor – China.

Of course, the Biden administration completed its North Korea policy review in May 2021, ahead of its Indo-Pacific Strategy, and announced that it would take “a calibrated and practical approach” to accomplish “complete, verifiable, and irreversible abandonment” of North Korea’s nuclear arsenal. “Abandonment,” which is a different term from that used by the Trump administration, does not seem to indicate Washington’s diminished commitment to denuclearisation. Some even explain that the early review of North Korean policy and Washington’s subsequent announcement that it was willing to engage North Korea diplomatically indicated that the US prioritised the North Korea issue over other issues on its agenda. However, it would be more accurate to conclude that this early review was intended to anchor South Korea in its forthcoming Indo-Pacific strategy to counter China and restore the US alliance system
in the region. In the eyes of the US, South Korea has not only hedged the US-China strategic competition but has also taken a more accommodating approach toward China to sustain momentum for dialogue with North Korea, which made it appear to be the weakest link in the US alliance network. Hence, in exchange for maintaining its diplomatic engagement toward the North that the Donald Trump-Kim Jong-un summitry initiated, the US would proactively strengthen its ties with the South.

Unfortunately, so long as the US simply deters and contains North Korea’s missile and nuclear capabilities, the North is likely to redirect its provocation toward its closer targets — South Korea and Japan — until the US no longer overlooks the North’s missile and nuclear threat. A series of recent missile tests, including a submarine- launched ballistic missile, a nuclear- capable cruise missile, and a so-called hypersonic missile, and reopening its nuclear reactor in Yongbyon, can be understood in this context. Furthermore, as demonstrated by Kim Jong-un’s recent speech to the 14th Supreme People’s Assembly in North Korea in September 2021, North Korea is attempting to increase its negotiating leverage vis-à-vis the US by tactically aligning with China as the US-China competition escalates. These developments also suggest that perceptions of threat from North Korea in the US and South Korea have begun to diverge, something that needs to be addressed consistently to minimise the risk of miscalculation by the North.

Meanwhile, as North Korea remains a key foreign policy focus for South Korea’s progressive government, President Moon Jae-in is likely to keep pursuing the peace process, despite the fact that it has yet to produce any tangible achievement. It is worrisome that such a persistent bid may decrease Seoul’s importance to Washington. When addressing Korean peninsula matters, South Korea tends to work with the US primarily on a bilateral basis. At the present time, this means bypassing an emerging set of regional processes intended to address broader international issues. As exemplified by the emergence of the Quad, Quad Plus, D-10, Five Eyes, and AUKUS, the US is building a rule-based regional architecture with layers of mission-driven coalitions to restructure — not simply to recover — the liberal international order. To that end, the US is seeking to mobilise like-minded democracies to balance against China and restore its global leadership by pooling hard power and securing legitimacy. Meanwhile, Seoul prioritises denuclearisation of North Korea and would prefer an inclusive regional order that does not exclude any state, including China, which is the main benefactor of North Korea. Accordingly, Seoul is likely to be isolated from the process of developing this newer regional framework and the building of norms, institutions, and a rules-based order associated with it. This consequence, however, will not overcome South Korea’s reluctance to lessen the importance it attaches to pursuing the peace process with North Korea given the pace of great- power competition between the US and China.

Nonetheless, 2021 has been the year in which the two allies have overcome tensions created by former President Trump’s transactional approach to its alliance and have restored their relationship. First, South Korea and the US reached a Special Measures Agreement (SMA)in March 2021, which had been stalled due to President Trump’s unilateral demand for South Korea to increase its contribution toward stationing US troops on the peninsula by up to five times the cost agreed in 2019. Second, both countries, despite South Korea’s established preference for a bilateral mode of cooperation, agreed to broaden the scope of cooperation beyond the Korean Peninsula, synergising South Korea’s New Southern Policy and
the US’s Indo-Pacific Strategy. In fact, at the ROK-US Summit in May 2021, the two countries also expanded their partnership to address vaccine provision, climate change, supply chain resilience, and technology innovation in their attempt to provide public goods to the region amid the COVID-19 pandemic. Further, they extended their cooperation into cybersecurity and space policy. 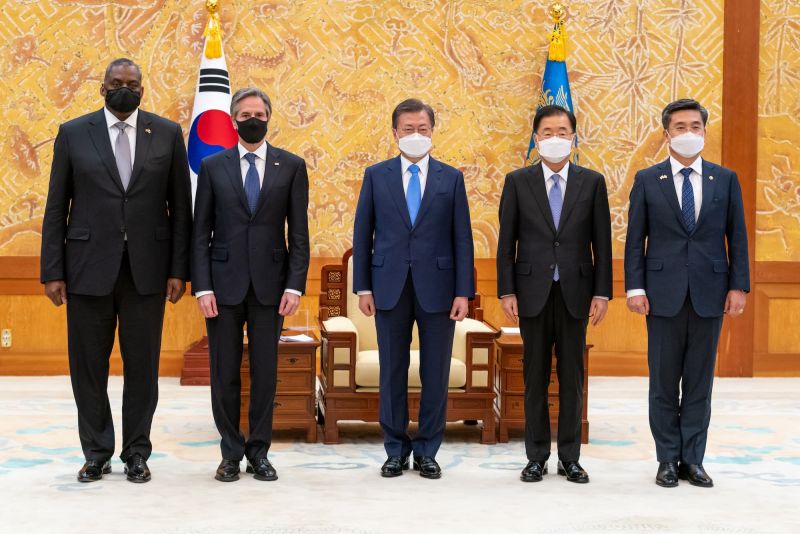 The US also terminated the missile guidelines that restricted South Korea’s development of ballistic missiles capable of reaching targets beyond the Korean Peninsula. Lifting these restrictions obviously strengthens South Korea’s capacity to deter North Korea’s provocations, but it also opens the door for strengthening South Korea’s ability to achieve dominance denial against China’s power projection in Northeast Asia. Meanwhile, the prospect of OPCON (operational control authority in wartime) transfer from United States Forces Korea to the ROK armed forces remains uncertain. It will be necessary to first complete the three-stage assessment of the merits of this important step, which has itself been postponed by the scaled-back joint military exercise and the ongoing pandemic that diminished South Korea’s military readiness. It should be emphasised that years of scaled- back combined exercises between South Korea and the US neither generated a window of opportunity to start a dialogue with the North nor advanced the security interests of the two allies, if the persistence of military provocations by North Korea is any guide. In the post-COVID-19 environment, the two allies’ restraint on the scale and character of their joint exercises is likely to be normalised if the North’s provocations continue.

It should also be noted that during the May 2021 summit, the leaders of South Korea and the US emphasised “the importance of preserving the peace and stability in the Taiwan Strait” amid the heightened regional tension over Taiwan. While both allies seem to acknowledge that South Korea’s commitment on the Taiwan issue might remain at the level of diplomatic support for the moment, experts in South Korea are concerned more broadly about how the US will posture its capabilities in the Indo-Pacific region under its evolving operational concept — multi-domain operations (MDO) — to deter a near-peer competitor, China, in all domains. Ultimately, this new concept is expected to affect the role and size of the US Forces Korea as well. While army-oriented US Forces Korea, which mainly maintains the stability of the Korean Peninsula, is less likely to contribute to crisis management in the Taiwan Strait in the short term, the strategic location of US Forces Korea could be regarded as instrumental in offsetting Chinese A2/AD (anti-access/area denial) capability in Northeast Asia. Grey-zone provocations are taken very seriously indeed among experts in South Korea, as is the frequency of Chinese maritime grey-zone operations, not to mention the increase of their illegal, unreported, and unregulated (IUU) fishing, and Chinese and Russian incursions into the Korean Air Defense Identification Zone. While this changing status quo around the peninsula might appear to give Seoul good reason to join the newer regionalframeworks intended to enable joint responses to these changes, it is still lukewarm to all these regional initiatives.

In particular, trilateral cooperation between South Korea, the US, and Japan is a key mechanism to bring US allies into a united approach on China and to forge a concerted effort to denuclearise North Korea. Deep-seated distrust between Japan and South Korea, however, continues to be a hurdle to addressing those agendas. While President Moon has signalled his willingness to step back from vocal opposition to the 2015 South Korea–Japan “comfort women” agreement, Japan, confident in its full alignment with the US on China, has not yet reciprocated. Besides, on North Korea, Japan prioritises strengthening deterrence against the North’s provocations over engaging diplomatically. While the stakes for trilateral cooperation in the Indo-Pacific are high for both Seoul and Tokyo as capable allies of the US, their diverging priorities and unsettled animosity make this trilateral framework a worrying source of miscalculation among the revisionist powers in the region.

In a nutshell, South Korea’s security outlook for 2022 remains uncertain, and the likelihood of a breakthrough in a denuclearisation dialogue with Pyongyang that Seoul anxiously hopes for has probably diminished. Also, the grander strategic outlook that the US seems to be aiming for is not entirely compatible with South Korea’s peace process, which inevitably accommodates China to engage North Korea. Such tensions in objectives and priorities also make it unlikely that South Korea will be able to play its full part in shaping the wider Indo–Pacific region. Furthermore, the diverging threat perceptions between the two allies — the US and South Korea — toward the North may well invite further provocations from the North and destabilise the peninsula.

Finally, South Korea’s presidential election in 2022 will pit the polarising foreign policy visions of the conservative and progressive candidates against each other, which could possibly bring substantial changes in Seoul’s approach to the North, the US, and the Indo-Pacific. While the Progressive campaign would mostly sustain the Moon administration’s existing foreign policies, the conservative campaign — with a number of candidates still competing in the primary — will provide a much more internationalist, alliance- oriented foreign policy overall, although some even emphasise the introduction of tactical nuclear weapons to maintain the balance of terror on the peninsula. This seemingly right-wing populist position of the conservative candidates, however, reflects the conservative voters’ grievance against the Moon administration’s North Korea policy. While it is premature to speculate on the outcome of the presidential elections, a change of the ruling party will definitely mean that South Korea’s foreign policy will be shaped by a different security outlook.

This article was first published in the Council for Security Cooperation in the Asia Pacific’s Regional Security Outlook 2022.