The first leaders’ level meeting of the Quad countries on Friday establishes the group as an emerging force in the Indo-Pacific. But as Prof. Purnendra Jain argues the US, India, Japan and Australia need to be more than just a bulwark against China’s global ambitions, but exemplars at home of the values they stand for – democracy, freedom and openness.

Soon after taking office in January this year President Joe Biden declared “America is back; diplomacy is back”. Here he clearly expressed his intention to respect and work cooperatively with allies and partners of the United States. One manifestation of America is back culminated last Friday in the first-ever summit of the heads of government of the United States, Japan, Australia and India under the Quad banner, marking a new era of geo-strategic cooperation between four leading Indo-Pacific democracies.

Before the leaders began their online summit, President Biden, prime ministers Yoshihide Suga, Narendra Modi, and Scott Morrison each made a short opening statement expressing their resolve to work together in a quadrilateral format to handle some of the key challenges confronting the region and indeed the global community. The signal they sent will force the world to sit up and take notice as they recalibrate and redesign regional and global alignments.

The Quad framework has come a long way since the idea originated in the wake of the 2004 Boxing Day Tsunami in which the four regional powers cooperated by offering humanitarian assistance and disaster relief to the affected countries in the Indian Ocean. This cooperation became the catalyst for the initiation of the Quadrilateral Security Dialogue or the Quad in 2006-2007, driven by then Japanese prime minister Shinzo Abe. But this iteration of the Quad did not progress far due to a mix of political opposition in the Quad capitals and China’s staunch criticism. As a result, the idea of the Quad as security mechanism was shelved for a decade until 2017.

As the regional strategic environment transformed over that decade, amid concerns over China’s maritime expansionism, rapid militarisation, and strategic assertiveness and coercion, the four nations reassembled as Quad 2.0. Abe was as critical to its revival as he was to its initiation in 2006. At the time of its revival, the former Japanese prime minister was the only head of government who remained from the initial group of Quad leaders. By then, much of the hesitancy shown by the Quad nations had dissipated, and they were ready to reengage in the Quad format.

With the strong commitment of Japan and Australia to the re-definition of the region as the Indo-Pacific, and their support for reviving the Quad, the Trump administration came around to the idea. India’s hesitancy also began to disappear as it faced a long border standoff with China in 2017 and a mini-war across the Himalayas in mid-2020. India, which had earlier opposed Australia’s re-entry into the trilateral Malabar exercise with Japan and the US, dropped its opposition in 2020, signalling its de facto approval of a quadrilateral framework.

In the second half of 2020 alone, officials and foreign ministers of the four member countries met (in person or virtually) three times, in September, October and December, and again in February 2021 with the inauguration of a new administration in the United States, discussing wide-ranging issues of common interest. The stage was then set to move the Quad to the highest level, given additional momentum by the arrival of a new president in the White House. Joe Biden’s first major diplomatic initiative was to assemble the Quad at the leaders’ level. 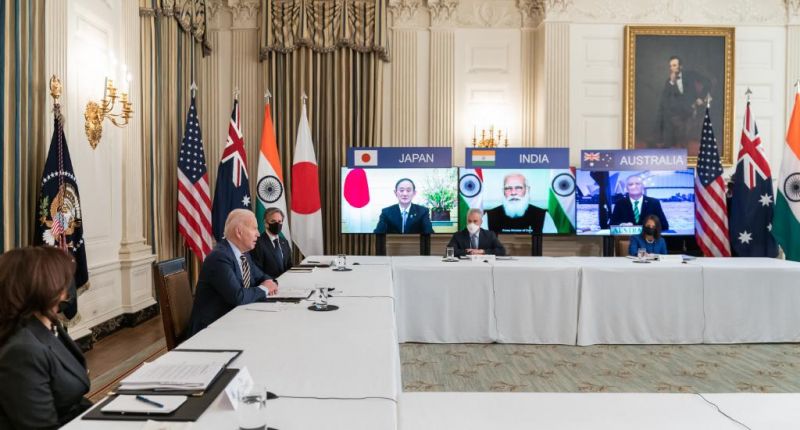 Achievements of the Summit

The first leaders’ level Quad meeting is a game changer for the Indo-Pacific. While political signalling and strategic messaging mean a lot in international relations, the summit goes beyond just that and has already offered a plan of action. More is likely to come. Unlike the Quad official-level meetings that never issued a joint statement and remained satisfied with each nation’s read outs at the end of a meeting, last Friday’s summit issued two documents: a joint statement titled ‘The Spirit of the Quad’ and a Quad summit fact sheet. The joint statement is a five-point document that commits the four to cooperation on economic, strategic and technological matters as well as collaboration to strengthen “equitable vaccine access for the Indo-Pacific”. The fact sheet outlines an action plan to deal with the COVID-19 pandemic and other burning issues such as climate change.

To deal with the pandemic and share vaccines throughout the Indo-Pacific, each Quad member brings its strengths to the table in a dynamic synergy. India will serve as the hub of vaccine production, the United States and Japan will finance production and enable nations through their aid programs to procure vaccines, and Australia will help in delivery, focusing particularly on Southeast Asian and Pacific island states.

Never before has such a plan with a clear division of labour for a global crisis been put in place by any other minilateral group. If successfully executed, this will serve as a template for future collaborative projects.

The Quad is often construed as an anti-China platform, with Beijing denouncing it as an Asian NATO and a military alliance to contain China. Initially, the Chinese leadership dismissed it as nothing more than a “headline grabbing” idea that would “dissipate like sea foam”. But their wishes have not come true and the Quad has progressed to a level China may not have anticipated. Although not an anti-China group, the Quad is certainly a China-induced framework. How China reacts, and what strategic moves it makes now and in the future, will partially define the future of the Quad.

China is not the only country opposed to the Quad and the Free and Open Indo-Pacific concept. Down but not out, Russia also is dead opposed. This puts India in a precarious situation. While India has developed closer strategic relations with the US, Japan and Australia in recent years, New Delhi also engages Moscow and Beijing through a Russia, India and China trilateral framework. Russia is a major supplier of arms to India. It’s a huge juggling act for India to keep one foot in the Quad and the other in a trilateral formation with China and Russia, which are in adversarial relationship with the other three Quad members. India’s strategic autonomy and multi-alignment policy comes under test as never before.

I have argued elsewhere that establishment of a Quad secretariat must be considered to coordinate the group’s day-to-day affairs and to shed its ad-hoc nature. This becomes even more crucial in view of the plan by the leaders to establish the three working groups on vaccines, climate change, and technology. Further down the track, they should think of a Quad charter outlining their aims and objectives.

The Quad seems to have staying power as the leaders have committed to an in-person meeting towards the end of this year, and want their foreign affairs ministers to meet annually.

For longevity, the Quad should work more as a global advocacy group, serving the interest of the global community rather than acting simply as strategic dialogue partners. It needs to be inclusive, consultative and transparent in its transactions. Since the four also pride themselves on being believers in democracy, freedom and openness, they should practise them in their domestic settings so that their legitimacy as the upholders of those values and practices is recognized in the Indo-Pacific and beyond.