As tensions rise between China and the Quad nations, ASEAN has the ability to leverage its centrality and encourage peaceful co-operation in the region, writes regional expert Le Trung Kien.

In the Indo-Pacific region, the intensifying tension between the US and China in trade, technology, public health and diplomacy, the deterioration of Australia-China and India-China relations and China’s rising influence across the region are, among others, claimed as the factors for the revitalisation of the Quadrilateral Security Dialogue (Quad) involving the US, India, Japan and Australia since 2017. This article argues that in the context of the rising tension between the Quad and China, ASEAN has the central position, both geographically and politically, to leverage its ASEAN centrality to encourage the inclusive, peaceful and integrated evolution of the Indo-Pacific region.

The Quad began in 2007 as a means for the US, India, Australia and Japan to coordinate their response to the 2003 tsunami in the Indian Ocean and its aftermath. After a flurry of activities, the Quad was abandoned in 2008 in face of hesitation from its member and Beijing’s extremely negative reaction. The experience of the Quad during 2007-2008 demonstrated that perceptions of a containment posture directed at China would make it difficult for the Quad to invite regional countries to sign up to its vision and approach. However, since 2017, the Quad has been revitalised through a series of informal meetings, military drills and a measure of policy coordination. The areas of cooperation range from connectivity, infrastructure development to security matters, including counterterrorism, cyber and maritime security. The declared objective of the Quad is to advance a free, open, and inclusive Indo-Pacific region. If it is to happen, then Southeast Asia accounts for a significant part of such a vision. Economically, Southeast Asia represents the world’s third largest population market and the fi fth largest economy. Geographically, the region sits right at the conjunction point of the Indian Ocean and the Pacific Ocean and straddles vital sealanes of transportation between the two oceans. Geopolitically, the ASEAN and ASEAN-led mechanisms have played a central role in the broader region’s multilateralism. At the Indo-Pacific Business Forum in July 2018, US Secretary of State Mike Pompeo stated, “ASEAN is literally at the centre of the Indo-Pacific, and it plays a central role in the Indo-Pacific vision that America is presenting”.

Against this backdrop, three key questions could have important implications for the future of ASEAN.

The first question is whether the tension between Quad members and other states, particular the US and China, will lead to the erosion of a stable and peaceful environment in Southeast Asia. There are concerns that the Quad may still be a relatively narrow instrument focused primarily on serving as a security counter to China. In November 2017, Quad countries started to develop a strategy for keeping the critical sea routes in the Indo-Pacific free and open. As India is inclining towards the Quad, there is discussion of the possibility of the Quad permanently institutionalising joint operational military exercises. The addition of Australia to the Malabar naval exercises will bring all the Quad countries together in an annual military drill. Any risk of a military collision between Quad members and China in and around the Southeast Asia, whether accidental or otherwise, is something that ASEAN is keen to avoid. As a group of small and middle-sized countries, ASEAN depends on a peaceful environment for economic development and regional integration. In addition, there are non-traditional security challenges that require China’s cooperation. For example, as the upstream country of seven of Asia’s largest rivers, including the Mekong River, with a series of upstream hydropower dams, China has pivotal responsibilities for the future of sustainable freshwater supply in the region.

The second question is the impact of the possible economic decoupling between Quad members and China on ASEAN’s broader regional integration. The outbreak of COVID-19 is accelerating the adjustment of the Quad countries’ supply chain to lessen their strong dependence on China. Concerns related to security and unfair competition from China have led the US to implement various measures aimed at lessening supply chain exposure to China, especially in high-technology areas. Japan and Australia have also taken further steps to reduce perceived over-reliance on China’s economy. In June 2020, Australia and India agreed to work together on diversifying their supply chain networks. Japan, India and Australia are reportedly seeking to build more resilient supply chains to counter China’s dominance. In addition, the Quad countries have increased their coordination on this economic development with a view to providing an alternative supply chain network for regional countries. The prospect of a division between different economic blocs and a less integrated regional economy is a mixed blessing for ASEAN, a prospect that could too easily do more harm than good. 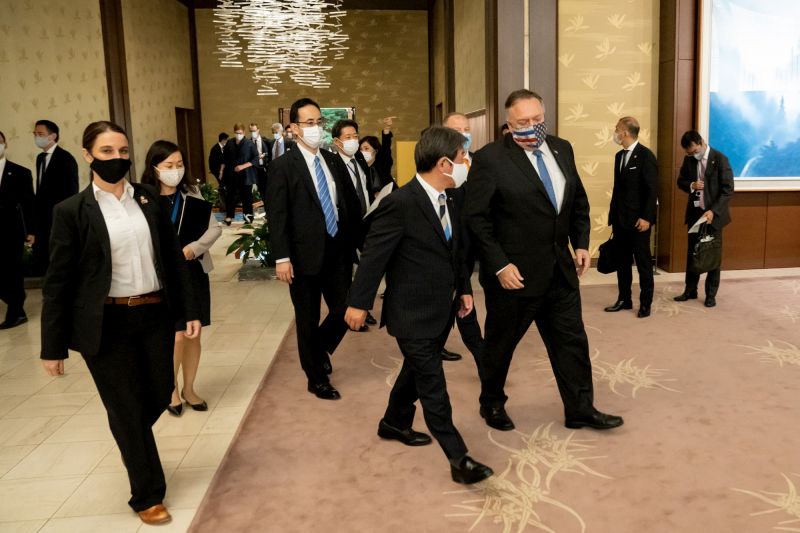 A further matter of concern is how ASEAN countries can position themselves in these shifting regional supply chains. In addition to the longterm presence of Japan’s investment in Southeast Asia, more economic engagement by the US, expanded trade with Australia and closer digital cooperation with India is welcomed by ASEAN. On the other hand, China has always been one of ASEAN’s most important economic partners. It may take decades for other markets to become an effective alternative to China given its compelling advantages such as a large pool of skilled labour, huge domestic market and an efficient logistical infrastructure. For example, even if the Quad countries place their factories in ASEAN member states, the most cost-effective source of necessary parts and materials for manufacturing will still come from China.

As the result, there are two challenges for ASEAN in securing an integrated and developmentconducive environment. The first is how to get both China and Quad countries positively engaged with the development trajectory of Southeast Asia and to see that ASEAN states are well-positioned to take advantage of the shifting network of regional supply chains. The second challenge is how to avoid both regional technology fragmentation and being considered as “choosing sides” with different major powers’ initiatives such as the Belt and Road Initiative (BRI), Indo-Pacific Strategy (IPS), Blue-dot and the Economic Prosperity Network.

The third question is how the institutionalisation of the Quad will affect ASEAN centrality and consequently ASEAN’s role in the broader regional multilateral architecture. The rebirth of the Quad in 2017 initially generated concerns from some ASEAN countries. Indonesia initially saw the Quad as a potential strategic coalition of ‘outside’ powers without ASEAN’s involvement Singapore warned against forming rival blocs or countries having to take one side or another. Until now, Quad countries have reaffirmed their strong support for ASEAN Centrality and the ASEAN-led regional architecture. So far, ASEAN is still considered one of the most infl uential groupings in the region. This is a good starting point but only a first step. On the sidelines of the annual US-India Strategic Partnership Forum, the US Deputy Secretary of State Stephen Biegun said in response to a question, “There is certainly an invitation there at some point to formalise a structure like this”. The magnitude of impact of any such development to ASEAN depends on the type and nature of such formalisation or institutionalisation.

Looking into the future, as trade and geopolitical tensions escalate across the region, ASEAN remains strategically placed to fulfi l a critical function in the Indo-Pacific. According to Australian National University academic Evelyn Goh, ASEAN is well-known for its hedging strategy in which ASEAN employs soft balancing to persuade the US to increase its presence in the region, while continuing to engage with China at various levels and to involve other regional powers. At this stage, there is a need of a new relationship management strategy that seeks to divert the major powers from confrontation in the Indo-Pacific region. ASEAN has niches in this area as both Quad members and China reaffirmed their support for ASEAN centrality. Although major powers possess the ability to act as they wish, Southeast Asia still has leverage because it is such an important objective in the strategy of each of them. China cannot realise the BRI without the engagement of Southeast Asia. Quad countries cannot realise the IPS without recognising ASEAN’s position and role as outlined in the ASEAN Outlook on the Indo-Pacific.

In this connection, ASEAN has several options to consider. First, ASEAN can try to limit the impact of political issues on the economic realm while at the same time strengthen the ASEAN Community. Externally, ASEAN member states would strengthen their trade, investment and tourism with all major and regional powers. Internally, ASEAN would continue the building of ASEAN Community, especially strengthening the ASEAN Economic Community and boosting intra-regional trade and investment for closer integration. An ASEAN with greater economic resilience would have more bargaining power when dealing with major powers, including Quad countries and China.

Second, ASEAN can seek to play a role as an honest broker that engages major and regional powers together in a constructive way. Among regional organisations in the Indo-Pacific, ASEAN has the necessary mechanisms in place and an extensive multilateral network on which to draw in place. The imperative within ASEAN to seek consensus despite the variation of views among member states, has arguably made the association more capable of handling relationships with major powers. This role would provide ASEAN the opportunity to make a stronger contribution to protecting stability and peace in Southeast Asia against turbulence emanating from elsewhere. ASEAN-led mechanisms such as East Asia Summit (EAS), ASEAN Regional Forum (ARF) and ASEAN Defence Ministers’ Meeting Plus (ADMM-Plus) should continue to facilitate communication and economic exchange among Quad members and China to avoid strategic miscalculation and to foster understanding of each other’s red lines. As an honest broker, ASEAN cannot take sides, but should stand by international law and fundamental principles such as those set out in the Treaty of Amity and Cooperation (TAC). ASEAN can seek to encourage and facilitate the convergence of views towards an open, transparent, inclusive and rules-based regional architecture in a myriad of ways including, leaders’ joint statement, communiqué or chair’s statement of the relevant summits hosted by ASEAN and even direct diplomatic engagement when opportunities arise.

Regardless of how opportunities to engage the major powers present themselves, it is important for ASEAN to be prepared to seize such opportunities and respond proactively. To avoid being caught between the Quad and China in any dispute is essential for the stability and prosperity of ASEAN. In the Indo-Pacific region, ASEAN has the central position not only geographically but also politically. The association can therefore leverage ASEAN centrality to promote an inclusive, peaceful and integrated Indo-Pacific region. On June 23, 2020, ASEAN adopted the “ASEAN Outlook on the Indo-Pacific” (AOIP), put forth by Indonesia. The AOIP presents an ASEAN-centred Indo-Pacific strategy that is more consistent with ASEAN’s principles of inclusiveness and consensus building. The Outlook also leans strongly toward a normative, political and diplomatic approach. In addition, ASEAN also needs to speak with one strong voice on critical issues related to its security and development. This is no easy task given the ‘ASEAN way’ and the varied and complex relationships that ASEAN members have with China and the Quad countries. As the result, it is time for ASEAN to further strengthen its cohesiveness and responsiveness, which in turn reinforces ASEAN centrality as the ‘primary driving force’ to guide ASEAN and its external partners toward an inclusive regional security architecture committed to compliance with and the defence of shared norms and principles to guide the peaceful coexistence of all states. If any lesson for Southeast Asia can be drawn from the experience of the last 30 years, it is that cooperation rather than geopolitical competition among major powers is more conducive for regional stability and prosperity.

Le Trung Kien is Senior Researcher at the Institute for Foreign Policy and Strategic Studies, Diplomatic Academy of Vietnam.

This article was first published in the Council for Security Cooperation in the Asia Pacific’s Regional Security Outlook 2021.