Releasing Australia’s latest strategic update, Scott Morrison warned our security outlook was infused with more dangers than at any time since the eve of World War 2. The risks are especially acute over competing territorial claims in the South China Sea. In this article, former Vietnamese diplomat Nguyen Quang Dy writes that ASEAN hopes for negotiation with China, but might have to settle for military deterrence.

Vietnam’s chairmanship of ASEAN in 2020 has been set against the backdrop of the COVID-19 pandemic and a deteriorating external security environment, which have shaped both the substance and the form of regional engagement this year. Although Vietnam has been one of the success stories in the containment of COVID-19, the pandemic has limited Hanoi to ‘virtual’ diplomacy—summits via video—that have detracted from the personal intimacy and bonhomie that are so much a part of the Asian style of diplomacy.

But this has not prevented Vietnam from harnessing ASEAN in support of a stronger stance on growing tensions in the South China Sea. After a delay of two months, Prime Minister Nguyen Xuan Phuc chaired the 36th ASEAN Summit of leaders in a ‘virtual’ meeting on 26 June, which resulted in one of the toughest ASEAN chairman’s statements to date on China’s unilateral claims to sovereignty over almost the entire South China Sea and Beijing’s provocative militarisation of various land features.

The ASEAN statement reflects greater regional unity and an assertion of leadership by Hanoi in its year as ASEAN chair. The hope is China might be encouraged to pull back and negotiate rather than persist with claims that have infringed on the rights of several regional countries. 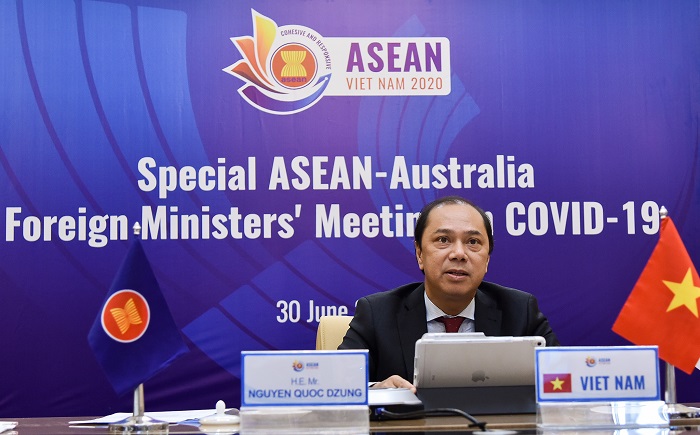 But the risks of conflict in the South China Sea are real and growing, making it one of the primary theatres for strategic competition between the US and China. Soon after the ASEAN statement, the US started to step up the pressure on Beijing with military exercises and its strongest ever condemnation of China’s actions. If diplomacy over the South China Sea fails, the only fall back will be to harden military deterrence, which in turn means greater collaboration between the US and regional partners.

In a major departure from ASEAN’s notoriously anodyne statements on the South China Sea, this year the ASEAN Chairman’s statement adopted a tougher tone. It “reaffirmed that the 1982 UNCLOS (United Nation’s Convention on the Law of the Sea) is the sole basis for determining maritime entitlements, sovereign rights, jurisdiction and legitimate interests over maritime zones”.

As this year’s ASEAN chair, Vietnam is committed to ensuring ASEAN centrality and continued strategic relevance. The statement emphasised the need to maintain and promote an environment conducive to the negotiations between ASEAN and China over a Code of Conduct in the South China Sea, and welcomed measures that could reduce tensions and the risk of accidents, misunderstandings and miscalculation.

For ASEAN claimants in the South China Sea, the mood has shifted from helplessness and despair to determined resistance to China’s aggressive actions. In other words, ASEAN has openly rejected any bid by China to adopt alternative legal principles, including its controversial claims of “historic rights” as the basis for asserting sovereignty. But Vietnam’s strategy entails a delicate balancing act – it envisages the active engagement by ASEAN of the major powers without acceding to the primacy of any single power.

In the words of Pham Quang Vinh, Vietnam’s former ambassador to the US anda key advisor to the government on ASEAN matters: “We have to work with everybody... Generally speaking, we agree that the US is important for this region in terms of security and prosperity. We need the US to engage different ASEAN mechanisms since ASEAN is strong if it is engaged by major powers…We want to be neutral, but we don’t want anyone to dominate the region”.

The Risks of Miscalculation

The latest ASEAN position on the South China Sea was initially welcomed by the Trump administration, in particular the “insistence that South China Sea disputes be resolved in line with international law”. Then, in a statement on 13 July, Secretary of State Mike Pompeo went even further when he issued a statement that “Beijing’s claims to offshore resources across most of the South China Sea are completely unlawful, as is its campaign of bullying to control them”.

Pompeo’s words—the toughest from the US on the issue—followed the US deployment of aircraft carriers for large exercises in the South China Sea in a pushback against the Chinese military buildup. The USS Ronald Reagan and USS Nimitz, escorted by four warships, started an exercise on 4 July, following an exercise in the Philippine Sea on 28 June. 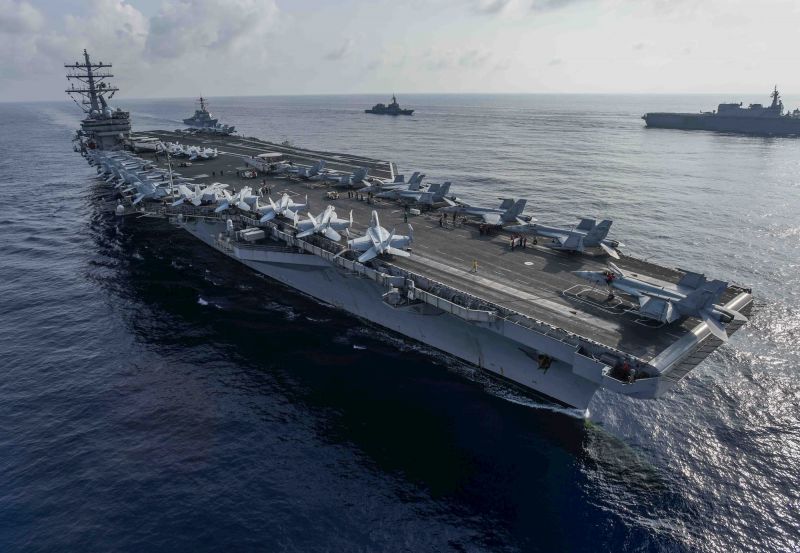 The USS Ronald Reagan, one of the two US aircraft carriers deployed for large exercises in the South China Sea as a pushback against China's military buildup. Image credit: Stuart Rankin/US Navy, Flickr.

Earlier in July, Kelly Craft, the US ambassador to the UN, submitted a note verbale to the UN where it rejected China’s claims as“inconsistent with international law”. The US objects to China’s claim to “historic rights” in the South China Sea to the extent that claim exceeds China’s legal maritime entitlements under UNCLOS and could destabilise security in the area.

With the COVID-19 pandemic still raging on around the world, China has intensified its coercion in the South China Sea. Its coast guard vessels 5402 and 5403 sailed very close to Vietnamese oil platform at block 06, Lan Tây, in operation there for years. China has made determined efforts to prevent Vietnam from further drilling at several wells near Vanguard Bank.

According to international news reports, the People’s Liberation Army Navy (PLAN) conducted a major exercise in waters near the Paracel Islands from 1 to 5 July, fuelling US-China rivalry, while China is expected to announce an Air Defense Identification Zone (ADIZ) there. On display in China’s military exercise were its newest warships – Type 052D guided-missile destroyers and Type 054A guided-missile frigates. It also tested its new so-called “aircraft carrier killer” weapons—the DF-21D and DF-26 missiles—which could target US aircraft carriers.

Some analysts argue, China’s more aggressive tactics in the South China Sea could send many Southeast Asian states into the arms of the US. At the same time, competing American and Chinese naval deployments and exercises increasethe risk of miscalculation and escalation, turning the South China Sea into the most dangerous theater of all.

The US upped the ante with the deployment of two aircraft carrier strike groups into the area for mutual support operations. Recent exercises also have seen the participation of attack submarines, aircraft carriers and long range strategic bombers, reflecting a paradigm shift in the US Defence Department’s approach to deterrence and sending China a new message about US naval power.

The Center for New American Security’s Robert Kaplan argues that the strength of alliance relies on effective deterrence, which in turn relies on solid strategic commitment. This sense of strategic commitment has been missing since Donald Trump came to power. With America’s Asian allies and partners feeling lonely and vulnerable, Kaplan raises the spectre of “Finlandization” – that is, he argues America’s erstwhile Asian friends might avoid interfering in China’s objectives and simply pay lip service to Washington. Vietnam’s geography makes it especially vulnerable to Chinese coercion if Trump is not seen as reliable enough. The same can be said about the Philippines, Malaysia, and Indonesia.

Analysts are concerned that the US-China trade war, the fallout from COVID-19, and the increased military activity could combine to raise the risk of conflict between the US and China in the South China Sea in the near term.

But there are ways for the US to mitigate the risks of military conflict. The most effective US strategy would combine diplomatic initiatives with a stronger deterrent posture.

The Price of Competition

If the US wants to check China’s control of the South China Sea, its deterrence must be strong enough to make China think twice, and its regional allies and partners must be strengthened to be less dependent on China. This might involve the US returning to the Trans Pacific Partnership trade grouping and maintaining stronger pressure on China through an arms build-up that challenges China’s capacity to keep pace.

While Western critics of China’s massive Belt and Road Initiative tend to interpret these problems in terms of the fear of indebtedness by recipient states, they rarely mention the indebtedness accumulated by China itself. One analysis predicts that China’s defence spending may fall in real terms in 2020.

According to professor Minxin Pei, the mindset of Chinese leaders has led them to commit a series of “calamitous strategic errors”. No Chinese leader anticipated the US would be “willing to write off the Chinese market in pursuit of broader geopolitical objectives”. The US strategy of decoupling caught them “totally by surprise”.

At the 36th ASEAN Summit, Southeast Asian states signalled the great importance they attached to abiding by the international rule of law. China needs to ensure it heeds the concerns of the region, return to a spirit of cooperation, and avoid the costs of military rivalry. The alternative is strategic folly.

Nguyen Quang Dy is a Hanoi-based writer. He is a former official in the Vietnamese Ministry of Foreign Affairs. He graduated from the Diplomatic Academy of Vietnam 1971, undertook postgraduate studies at the Australian National University (1976-1979), and attended Harvard University as visiting scholar and Nieman Fellow (1992-1993).