The new AUKUS agreement marks an important shift in Australia’s long-term strategic positioning. But Thomas Parks argues that it does not mean an end to Australian middle-power diplomacy. Australia needs to grow its role as a “proactive, pragmatic, autonomous” power in the Indo-Pacific and deepen relations with “critical partner” ASEAN.

The recently announced trilateral security partnership between Australia, the United Kingdom and the United States (AUKUS) has rippled across the geopolitical landscape. The reactions in Southeast Asia have been mixed, with Malaysia and Indonesia expressing concerns, the Philippines sending mixed signals, and Singapore indicating cautious support. In Australia, reactions to AUKUS have been remarkably diverse, ranging from Paul Keating’s argument that Australia is turning its back on Asia, to Peter Jennings’s argument that AUKUS will ensure that Australia will not have to “subordinate our national interests to China.”

There are two broad interpretations of AUKUS. The first is that it is a sensible balance-of-power response to an increasingly uncertain geopolitical environment, through deeper security cooperation among long-time allies. Stephen Walt from Harvard argues that AUKUS demonstrates that an “effective balancing coalition” in the Indo-Pacific is possible, despite vast distances and collective action problems that compel most states in the region to avoid taking sides. Given that the US has a long-established mutual defense alliance with both Australia and the UK, and all three governments’ concerns about China as a growing threat, the decision to deepen security cooperation is hardly surprising.

The second interpretation of AUKUS is that it marks a decisive return to great power alliances, and an abandonment of middle-power diplomacy. It is reasonable to see why smaller states in the Indo-Pacific have expressed mixed viewed of AUKUS, with some concerns about a new arms race, or a consolidation of a US-led bloc to contain China. The fallout between Australia and France — until recently a promising and growing middle-power partnership — is emblematic of the shift from multipolar to bipolar approaches. Will middle-power diplomacy survive this apparent shift in geostrategic alignment in the Indo-Pacific? Only last year, it seemed that the era of formal great power alliances was fading, despite China’s rise. As the Indo-Pacific lurched towards an increasingly multipolar system, and as confidence in America’s reliability reached an all-time low in the chaotic final year of the Trump Administration, the argument for Australian middle-power diplomacy was compelling and increasingly mainstream. Many prominent foreign policy experts in Australia argued that the future of security in the Indo-Pacific would be, at least in part, underpinned by more ad hoc, informal arrangements between various powers such as Japan, France, India, UK, South Korea, Singapore, and Indonesia.

Rory Metcalf argued that the “diplomatic trend of the times is a third way (between bilateral and multilateral), in which countries find ‘like-minded’ partners and band together in small groups. These are neither formal alliances nor ponderous multilateral organisations, but creative coalitions defined by convergences of interests, values and capabilities, and a readiness to work together, making them islands of relative trust and cooperation in a sea of troubles.” Similarly, Hugh White argued Australia needs to find a new formula for regional security, based on “looser and more fluid” relationships. “The model of alliances we have inherited from the Cold War — long-term, stable, all encompassing, like ANZUS and NATO — will be of little use in preparing Australia for the changes unfolding in Asia.”

With a string of new initiatives in 2020, Australia seemed to be renewing this legacy. In September 2020, the Paris-Delhi-Canberra Axis had its first virtual ministerial meeting. This unlikely combination was the product of middle powers seeking to hedge their bets based on the assumption that the future was likely to be multipolar and unpredictable. In May, DFAT released the Partnerships for Recovery strategy, which recognised the interdependence of Australia’s recovery with that of her Southeast Asian and Pacific neighbours, and committed to support their recovery. The Partnership for Infrastructure (P4I) and Mekong-Australia Partnership were announced in November, with significant new funding and pledges to deepen bilateral engagement in this strategic and contested region. Bilateral relations with India and Japan deepened, notwithstanding the upgrading of the Quad. Australia’s engagement with ASEAN continued to expand and deepen. But was 2020 the high-water mark of Australia’s return to middle power diplomacy?

AUKUS is clearly an important shift in Australia’s long-term strategic positioning, however, it does not mean an end to middle-power diplomacy. To the contrary, Australia’s role as a proactive, pragmatic, autonomous middle power in the Indo-Pacific will almost certainly continue and could indeed grow in importance in the coming decade.

Australia has a clear strategic interest in deepening relations with small and middle powers in the Indo-Pacific. Southeast Asia, in particular, will be a critical economic and security group of partners for Australia in the coming decades. ASEAN member states — particularly those that are closest to Australia’s northern approaches, Indonesia and Malaysia — have made it clear that they do not want the US-China rivalry to split their region, and that they will resist efforts to draw them into opposing blocs. Smaller states in the region who are committed to maintaining positive relations with China and the West, will want to keep their distance from a major new security alliance. As such, Australia must demonstrate that its engagement with Southeast Asia is independent of AUKUS. 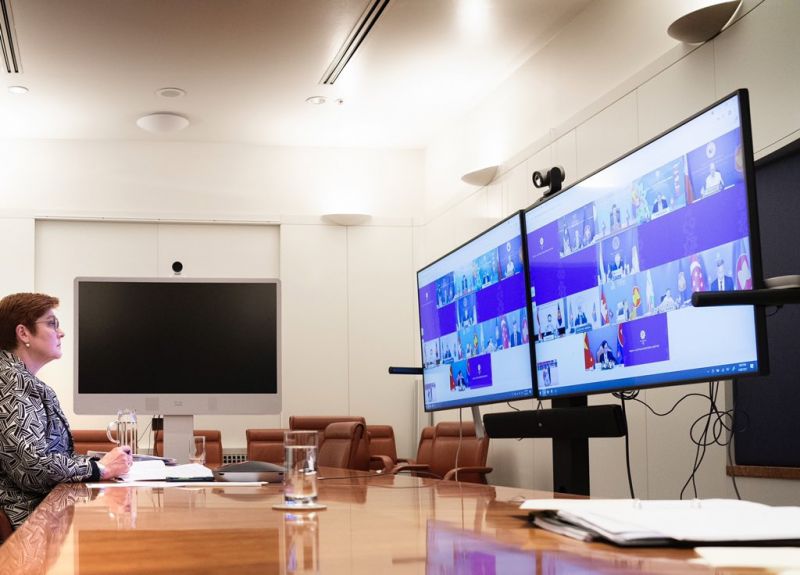 Furthermore, it is premature to assume that the Indo-Pacific is hurtling towards a bipolar future. Given the proliferation of external powers engaging in the region, and various shifting platforms and partnerships, AUKUS may indeed be one of many new geopolitical groupings to emerge in a multipolar Indo-Pacific. France and many other external powers will be actively looking to create new middle-power alignments, and bolster their engagement with ASEAN, rather than seeking to join a US-led coalition. Finally, deeper defence cooperation with the US need not preclude Australia from expanding its diplomacy with the region. It is extremely unlikely that the US would seek to limit Australian room for manoeuvre in its own neighbourhood.

Can Australia have it both ways? Yes, but it will require a delicate diplomatic balancing act. There is work to be done to reassure countries in the region that Australia will not be defined by AUKUS. In the weeks since the AUKUS announcement, Australian diplomats have been working overtime to assuage the concerns of ASEAN partners. In a statement, Australian Ambassador to ASEAN, Will Nankervis argues that “this new agreement does not change Australia's commitment to ASEAN nor our ongoing support for the ASEAN-led regional architecture.” Australia’s inclusion in AUKUS may complicate Australia-ASEAN relations in the short-term, but Australia has plenty of options for working through this challenge.

Middle-power diplomacy is crucial for Australia’s relations with Southeast Asia and the Pacific. Expanding the web of cooperation between Australia and its neighbours will arguably be just as important as nuclear submarines for Australia’s long-term security and prosperity. Now is the time to build on Australia’s investments and commitments to date, by deepening engagement with small and middle powers and continuing to pursue middle-power solutions in the region.

Thomas Parks is the Country Representative in Thailand of the Asia Foundation. He co-authored and managed the influential study Contested Corners of Asia: Subnational Conflict and International Development Assistance and is authoring a forthcoming book on the geopolitics of Southeast Asia.