Australia should learn from 19th century statecraft, says former ambassador John McCarthy, and practice some artful diplomacy in the coming months that balances our interests in securing a strong US, a stable region, and if possible a cooperatively engaged China.

The next six months will be important for Australian external policy. During this time, we would be advised to heed the counsel of the French 19th century statesman Talleyrand: “Above all, gentlemen, avoid excessive zeal.”

The dictum is most pertinent to our dealings with China.

In our hunger to embrace China in the halcyon days, our interests suffered by paying insufficient attention to its self-assertion in the South and East China seas, its unfair trade practices, its theft of intellectual property, and its cyber interference.

Now, our zeal to contest China on all fronts has also damaged us.

It makes excellent sense to strengthen our defences – both conventional military and cyber. We should help challenge China’s maritime adventurism where it impacts on our friends and allies and given our direct interest in freedom of navigation. It is potentially defensible to exclude Huawei from Australia – albeit the government has never clearly explained why we are right to do so and why other sensible countries are wrong to retain it. But we have displayed excessive zeal in embarking on wholesale policing of university agreements with foreign institutions, in the highly publicised raids on a third-tier Labor politician in Sydney who has no access to issues relevant to our national security, in the questioning of Chinese journalists here, and, above all, in the much publicised attempt to spotlight China on the origins of COVID-19 at a time when global common cause in combatting the disease is crucial.

In these circumstances, Chinese actions against us on barley, beef, wine, and possibly coal may not be cricket, but they are hardly surprising. They constitute the tougher, coercive side of diplomacy. Fairly or unfairly the Americans have acted similarly not only against Russia and Iran but against third countries that wish to do business with them. History is full of other less recent examples.

The same questions about excessive zeal arise in terms of our regional policies.

Here, thus far, we have been more careful.

At the bilateral Australia-US Ministerial Meeting (AUSMIN) in Washington in July, we declined to match Secretary of State Mike Pompeo’s Cold War rhetoric on China and indeed alluded to our interest in a good relationship with China.

At the recent Quad meeting in Tokyo, Pompeo called for the US, Japan, India and Australia to “build out a true security framework”—something of a retreat from other American suggestions of an Asia-Pacific NATO—but still much further than Japan and India wanted to go.

Apart from not sharing Pompeo’s buccaneer spirit, Japan continues to seek some equilibrium in its relations with China and has constitutional issues with security groupings. And while India continues to have serious border issues with China, it shows no inclination to veer from its doctrine of Strategic Autonomy

To our credit, Australia also demonstrated a clear disinclination to be drawn further into Mr. Pompeo’s web of aspirations.

If the Quad is to be in our interests, it has to be a cautious Quad.

The more the Quad develops a distinct identity, the greater the risk of growing regional fracturing between three groups—China, the Quad, and ASEAN—possibly with China pulling at Myanmar, Cambodia and Laos, and the Quad pulling at Vietnam. This will make it all the harder to develop even the loose regional approaches on managing China’s rise-particularly on the South China Sea. 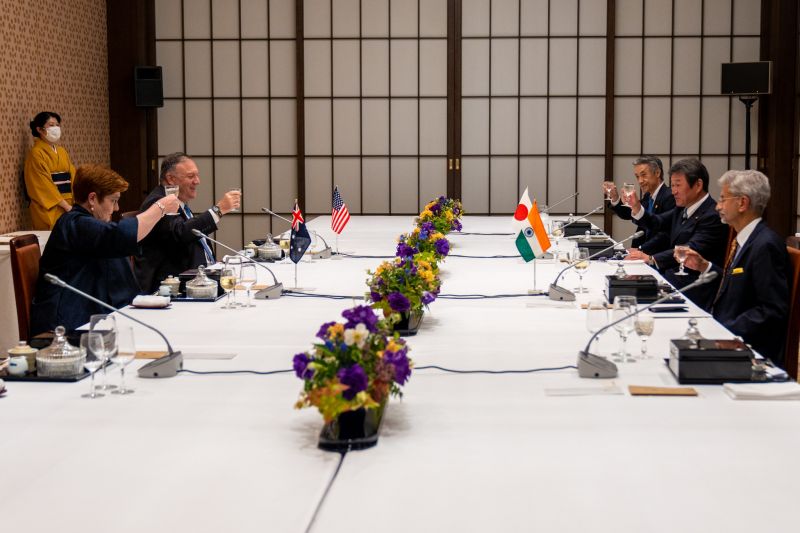 Some of the same considerations apply to the Anglosphere intelligence sharing group known as Five Eyes, which is mooted by its membership to play a greater policy role in regional affairs. If Japan joins the group, as was suggested last week by former Japanese ambassador Sumio Kusaka, some of the imperial gloss of the Anglosphere will be dulled, but it will still be perceived at bedrock as a rich westerner’s club seeking to influence the affairs of the region – a perception which the Chinese are likely to exploit.

A final note of caution for Australia relates to its approach to dealing with a Biden administration, given the increasingly likelihood Biden will beat Trump in the November 3 US presidential elections.

From a number of reports, Australia’s central objective will be to seek to persuade the Biden administration to give appropriate priority to its interests in the region. In taking this approach we intend to engage seriously with Japan.

It is absolutely the right approach to work with Japan. No country has a greater stake in, or experience of Sino-US dealings, including on the central issue of Taiwan. And however regional events unfold, our own future will be shaped by that of Japan and by that of the US-Japan alliance

But in approaches to the United States, we have to understand that Biden’s priority—and ultimately our own—will be to get his own national house in order. If he does not succeed, American strength and influence—and hence capacity to play the regional and global role we need from it—will recede further.

A second objective should be to encourage the United States to not only where necessary confront or compete with China, but as some Democrat advisers have counseled, look to areas where cooperation with China is necessary and desirable.

While in both the United States and Australia, it has become common to portray the search for interest based accommodation as appeasement, this description makes no sense if both sides are prepared for even a qualified measure of reconciliation.

If the Chinese suggest even obliquely that they are interested in lowering the temperature—as they have recently in comments by former ambassador Fu Ying to the Australian Financial Review and in Xi Jinping’s reaction to Trump’s bout of COVID-19—we should think about their significance.

Responding favourably in these circumstances is not appeasement, but engagement.