Amid a once-in-a-century pandemic that has closed borders and deflated economies, two of Australia’s most senior cabinet ministers flew to Washington for the Australia-United States Ministerial Consultations (AUSMIN) on 28 July. Ministers and foreign affairs and defence chiefs were to undergo two weeks of quarantine on return to Australia. In an era when G20 meetings and leaders’ summits have taken place by video link, Michael Wesley asks what is so compelling about these talks that justifies chewing up three weeks of two senior ministers’ time?

The AUSMIN talks were conceived in the midst of the biggest crisis in our American alliance: New Zealand’s refusal to allow nuclear warships into its ports, which resulted in Wellington being booted out of ANZUS. Since 1985, Australia’s Foreign and Defence ministers, along with senior intelligence, military and diplomatic officials, have met almost yearly with their United States counterparts. It was a decisive development for Australia – regular, uninterrupted “face time” with the American cabinet ministers responsible for charting the superpower’s global strategy. The “2+2” meeting format has since become the gold standard for signalling the seriousness of a strategic partnership.

Particularly since the mid-1990s, AUSMIN has functioned as the alliance’s clearing house, providing a regular focal point for the work of officials on both sides of the Pacific in shaping the Australian–American strategic partnership. The AUSMIN meeting agenda is developed in the months leading up to the talks. When the principals get together, they discuss and sign off on agreements and arrangements long in the making. It is not unusual for major announcements to be made at a joint press conference after the meeting, signalling significant evolutions of the alliance. 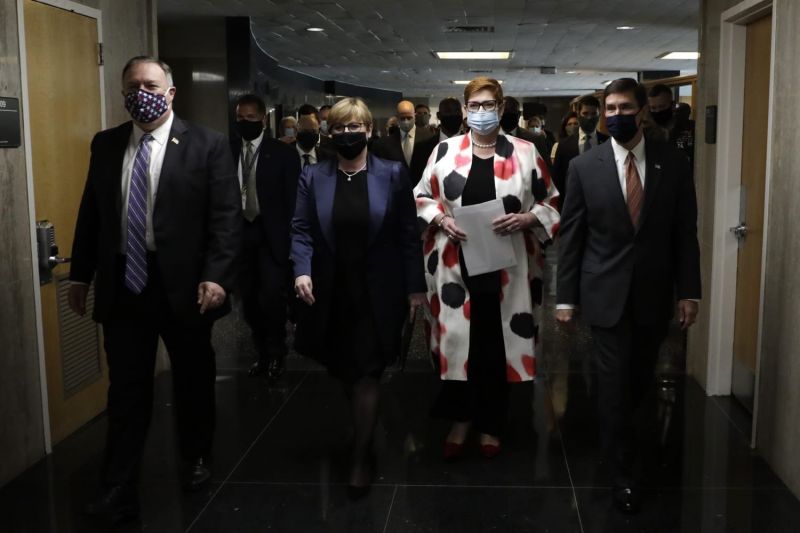 The 1996 Sydney Statement, for example, marked the beginning of a progressive tightening of Australia’s alliance bonds with the US. It was issued in the first months of the Howard government, in the midst of a marked increase in tensions with China over Beijing’s threatening response to Taiwan’s presidential elections.

Several trends have been at play during the quarter-century since. The first is greater integration between Australia’s and America’s military and intelligence organisations: the co-embedding of personnel and equipment; increasingly detailed joint planning; development of joint systems; closer alignment of strategic concepts and approaches.

The second is the growing importance of Australia to US strategic priorities: as China has displaced the Soviet Union and then terrorism as Washington’s greatest threat, Australia’s geographic position has assumed an ever more important role in America’s responses.

Then there is the nesting of the alliance in broader bilateral partnerships: a free trade agreement; a common interest in elevating the G20’s global role; science and technology collaboration. Fourth is the shift in the language of the alliance, from the calculating of convergent interests to emotive declarations of a century’s “mateship”.

Each of these trends is manifest in the outcomes of this year’s AUSMIN meeting. The principals agreed to a classified plan for further integrating Australia’s and the US’s force postures in the Indo-Pacific. Darwin continues to emerge as a significant strategic location, hosting US Marine Corps rotation exercises that will now be extended to other security partners, as well as a new strategic fuel reserve. Science and technology co-operation has received an added boost, particularly in space, and Washington and Canberra have agreed to a critical minerals action plan. And of course there is the now-obligatory language of the “long, cherished and unwavering friendship between the United States and Australia”. 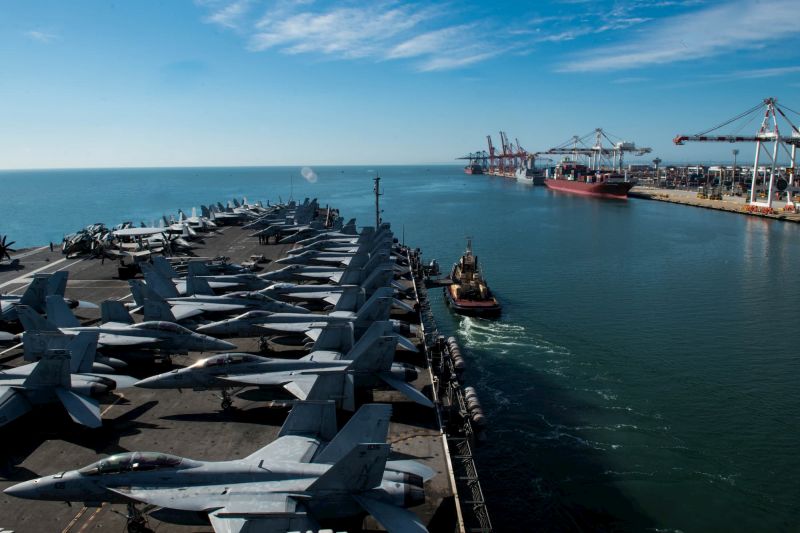 There are plenty of people in the Canberra–Washington bubble who see all of these developments as unqualified positives. What better for a wealthy country of just 25 million people in an unstable neighbourhood than to be increasingly intimately linked to the world’s most powerful country? Better still, it’s a country with which we share cultural, social and political values, in a world where countries with which we share none of these things are becoming increasingly powerful.

The danger is that this way of thinking can easily transform into a belief that the alliance is an end in itself, rather than a means to achieving our foreign policy objectives. Australia’s leaders should beware of being tempted to do things primarily to demonstrate our loyalty to the occupant of the White House in the name of “alliance maintenance”. At its worst, the alliance maintenance mentality leads to decades-long military involvements in the Middle East; more benign is the dispatch of two cabinet ministers to a COVID-19 hotspot in the middle of a pandemic. But they should be careful of what their American counterparts ask them to agree to.

Current trends will drive Washington to seek ever more consequential gestures of alliance loyalty. The US–China relationship is becoming more Cold War-like by the day, with threats of economic and technological decoupling, increasingly shrill ideological denunciations and burgeoning military competition. It is a polarising dynamic, with each of the protagonists seeking to isolate the other by drawing as many countries as possible to its own side and becoming increasingly intolerant of those seen as fence-sitters.

In this atmosphere, statements by Australian leaders that we don’t have to choose between the US and China are met with stony silence in Washington. Successive American governments have made clear that any ally that allows Huawei to build core communications infrastructure may no longer enjoy as intimate an intelligence relationship with the US. The Trump administration has increased its calls to allies to stand up to China, and its more hawkish members are said to believe that only when Australia starts to suffer economically will it be taken as a sign that Canberra is serious about confronting Beijing. As our alarm grows about China’s increasing power and assertiveness, it is tempting to align ever more closely with the US. This is the most vulnerable Australia has felt since 1942. China’s challenge is not only to the regional order we have helped build to the benefit of all, but now to the integrity of our domestic institutions and infrastructure. But hard-headed statecraft must ask how a much closer alignment with US foreign policy will advance our national interests at this time, and how it fits in with our broader strategic interests.

For much of its history, our alliance with the US has unambiguously advanced our foreign policy interests. The US has long been without question the most powerful country in our region. By helping to anchor its strategic footprint in the western Pacific, Australia has contributed to a benign status quo from which it and many other countries have prospered. Now, however, US power and authority in our region have waned, and we are unlikely ever to return to the comfortable world of uncontested American primacy from which we once benefited.

The trajectory of American foreign policy during the past five years is clearly driven by a conclusion that China can no longer be integrated into the region in ways that preserve an acceptable status quo. Beijing’s regional objectives are to shape its environment in its own interests and away from those of America. Washington’s response is that China must be isolated and confronted. And that means that allies such as Australia need to get with the program.

Can China be isolated by American pressure, and will confrontation force it to back down? We should be sceptical, at least, on both questions.

As the world’s largest manufacturer and exporter, China is the leading trading partner of every country in the region, including the US. Its economy has been less battered by COVID-19 than any other major economy and is widely predicted to rebound strongly. How many of its neighbours, seeking to reflate their economies, can be tempted to join in a push to isolate China? Similarly, it seems unlikely that China could be cowed by American belligerence today – it has been willing to take the US on since the Korean War, when the military imbalance between the two was vastly greater.

Beyond doubts of whether the US strategy will work, there are even more serious questions. How will polarising US–China competition affect the regional order on which Australia’s security and prosperity so depends? Does it really serve our interests to contribute to a bifurcated region, with some countries gravitating towards Beijing and others towards Washington? Furthermore, given that our two most recent defence and foreign policy white papers have advocated an “alliance-plus” strategy of building closer security partnerships with regional countries such as Japan and Singapore, will following America’s isolate-and-confront strategy make us closer to regional countries or increasingly distant?

Perhaps most importantly, however, is what we might do if the US suddenly changes its strategy on China. If Trump loses November’s election, a Biden administration may well decide to return to a more pragmatic, Obama-era policy in relation to Beijing, where the US seeks to manage a fractious relationship. An Australia that had followed the Trump policy too closely in the interests of alliance management would be left high and dry, with an enduringly antagonistic relationship with China and estranged relations with other regional countries.

The alliance is a means, not an end, in our foreign policy. We should be wary of the urge towards alliance maintenance without a clear view of our interests and how the alliance serves them.

Michael Wesley is professor of political science and Deputy Vice-Chancellor International at the University of Melbourne.

This article first appeared in the print edition of The Saturday Paper on August 1, 2020.