The Albanese government has made a good start in building relations with Pacific Island nations, but the hard work is yet to come, writes James Batley.

The government has actively sought to contrast itself with the Morrison government in the region. At a rhetorical level, there has been a strong emphasis on “listening”, which has been well received. And the government has come to power with new policies that will be welcomed. These include, inter alia, promises of additional aid, a new domestic climate change commitment, and a new program for permanent migration from the Pacific.

Truth be told, though, the government’s approach is likely to represent an evolution, not a revolution. Indeed, in many areas we should expect to see strong continuity from the Morrison era. We are yet to see a strategic-level statement of the government’s intent in the Pacific along the lines of the 2017 Foreign Policy White Paper; it would be especially good to know if the Albanese government sees continued integration between Australia and the Pacific as a primary policy objective.

Even so, speeches and official statements to date are a reminder that a change in tone is not necessarily the same thing as a change in strategic direction. In practical terms the aid and defence cooperation programs — with some tweaks — will remain key policy tools in pursuit of Australia’s objectives; support for Pacific regional institutions will remain a priority; and labour mobility will continue as a growing element in economic integration and people to people links.

The Albanese government may not use the Morrison-era term ‘Pacific Step-up’, but it has wholeheartedly adopted Morrison’s use of the term ‘Pacific family’ to describe Australia’s relations with its Pacific neighbours. Indeed, in her inaugural message to the Pacific — issued the day she was sworn in — Penny Wong used the phrase ‘Pacific family’ no less than five times in a two-minute video.

Incidentally, the results of Australia’s 2021 census suggest that there is now slightly more substance to the language of ‘family’, with the proportion of the Australian population claiming Pacific Islands ancestry doubling since 2006, albeit off a very low base and still only representing just over one percent of the total.

If climate change represents the key point of contrast between Australia’s current government and its predecessor, the question of China in the Pacific is the area of strongest continuity. The government faces serious challenges on both fronts. 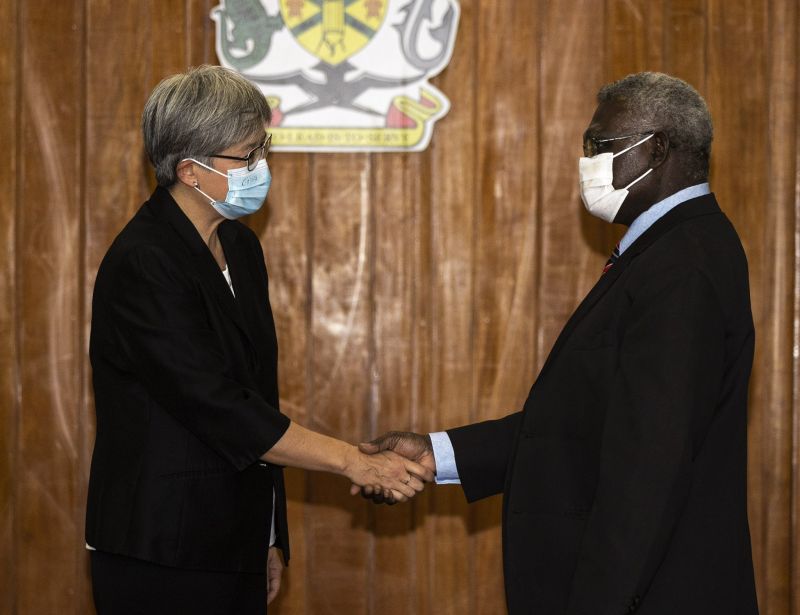 Wong’s description of the China-Solomon Islands security agreement as ‘the worst foreign policy blunder in the Pacific since the end of World War II’ sets a high bar for the government’s management of the China challenge in coming years. It is helpful, from Australia’s point of view, that China seems to have overplayed its hand in the Pacific over recent months, not only in the Solomon Islands agreement but in its unsuccessful attempt to corral the region into signing up to a ‘Common Development Vision’. The communique issued by Pacific Islands Forum Leaders at their meeting in July, which stated in part that ‘leaders reaffirmed the concept of regionalism and a family first approach to peace and security’, was an encouraging sign of what might be an emerging regional consensus on how better to manage regional security cooperation. But it is hardly definitive.

It is of course wishful thinking to hope that China will desist from attempts to entrench itself in the region, and to disrupt traditional relationships. Nor, in the case of Solomon Islands, should the government draw any comfort from Prime Minister Sogavare’s repeated reassurances that his relationship with China is entirely benign. The government will need to find ways of building on the momentum of the positive Forum outcome at both a bilateral and a regional level.

The climate change challenge is of a somewhat different order. While Pacific leaders prefer Australia’s new domestic climate targets to those of the previous government, a gap remains between Australia’s position and the aspirations of Pacific Island countries. Pacific views on this question align most closely with those of the Australian Greens. Only time will tell how much this gap will remain an irritant in relations. Beyond adjusting Australia’s domestic settings, there is work to ensure that Australia’s aid program in the Pacific reflects the government’s aspirations on climate change. Given the multiple demands on the aid program, this may not be easy. The government also is likely to face increasing calls to develop policy in anticipation of climate-induced migration.

Development challenges remain serious across the region, including because several tourism-dependent countries are suffering from particularly bad COVID hangovers. Australia’s aid program is not a panacea, but these are issues Australia cannot afford to ignore. With democratic practice and accountability (an open media, free and fair elections, the rule of law, independent judiciaries) weakening in several countries, the government may need to confront the extent to which values matter in our relationships in the region.

Problems of governance and effective institutions remain particularly acute in Papua New Guinea and Solomon Islands. The former faces an existential challenge over the future of Bougainville, which voted 97.7 percent in favour of independence in late 2019. It is hard to envisage any national government in Port Moresby agreeing to a complete separation, just as it is hard to envisage any Australian government breaking ranks with Port Moresby on this question. The problem is wicked: Bougainville’s independence would risk removing one source of instability in the immediate region only to replace it with another. Quite apart from its impact on Papua New Guinea itself, an independent Bougainville could seriously exacerbate entrenched tensions between the national and provincial governments in neighbouring Solomon Islands. And regardless of the fate of Bougainville, Solomon Islands is likely to experience further turmoil.

The broader policy challenge for the Australian government is to integrate aid and non-aid instruments so that these are mutually-reinforcing. The latter include defence cooperation (which isn’t counted as aid), expanding labour mobility and migration policies, and soft power initiatives including a credible “First Nations diplomacy” – whatever that might look like in practice.

Renewed interest in the region by friends and allies is of course welcome but presents another set of challenges. Working in concert, countries like Australia, New Zealand, the US, Japan, France, and the UK all theoretically reinforce each other’s efforts  In practice this is not always the case, or not as much as one would hope. National systems can be very different and the US, in particular, seems to find it difficult to work at the granular scale required in the Pacific. The recently announced Partners in the Blue Pacific initiative — combining Australia, Japan, New Zealand, the UK, and the US — commits its members to work better together in responding to Pacific priorities, but it remains unclear whether this is anything more than well-meaning rhetoric.

Scott Morrison set a historically high bar for Prime Ministerial engagement in the Pacific, and it paid dividends: we do not know yet whether Anthony Albanese will continue this pattern. Penny Wong and Pat Conroy will do a lot of good together but they can only go so far in fostering relationships with heads of government. Within the public service, the government will soon be making some key appointments, not least new Australian High Commissioners to Solomon Islands and to Fiji. Both are challenging and influential positions. In Canberra, the indefatigable Ewen McDonald has presided over the Department of Foreign Affairs and Trade's Office of the Pacific since its establishment in early 2019: while there is no time limit on this position, he can’t be expected to stay in the role indefinitely.

The Albanese government is enjoying something of a honeymoon in the Pacific, and deservedly so. But it’s unlikely to last. Formidable challenges loom, and the inbuilt structural imbalance between Australia and its smaller neighbours will inevitably give rise to tensions and disappointments. That’s not the end of the world. Indeed, historically it’s par for the course. So far, so good: now for the hard part.