The absence of major terrorist attacks in Indonesia is welcome evidence that counterterrorism strategies have been working. But Sylvia Laksmi argues the country needs to play a patient, long-term game that ensures as much weight is put on ‘soft’ preventative measures as hard law enforcement if it is to win the struggle against terrorism.

It has been more than a decade since the last in a string of major terrorist bombings rocked Bali and Jakarta. Indonesia, with the world’s largest Muslim population country, would appear to have successfully countered terrorism.

The fight against terrorism has been one of the country’s most urgent national security priorities. But fears of terrorism threats still linger, despite improvements in counterterrorism legislation and law enforcement.

Indonesia has been on alert for attacks since a bomb exploded in a church in the Indonesian city of Makassar early this year and continued with a suspected lone-wolf attack by a female at the national police headquarters in Jakarta in April. The dangers clearly have not passed.

The degradation of capabilities and territories of the Islamic State (IS) did not lead to the end of aspirations among radicals for a caliphate. Followers of hardline ideology still believe their martyrdom brings a noble death. The issues of Indonesian Foreign Terrorist Fighters (FTFs), returnees, and relocated travellers are yet to be resolved. And the threat environment grows increasingly complex with the resurgence of Jemaah Islamiyah (JI) – the terrorist group that perpetrated the 2002 Bali bombing, the single worst attack on Indonesian soil. In August, 53 suspected members of JI and the Jamaah Ansharut Daulah (JAD) were arrested over a plot to launch attacks on Independence Day.

What counterterrorism strategies does Indonesia have in place to meet potential new threats? Since the 2002 Bali bombings, the government has adopted a combination of offensive and defensive countermeasures. It established Densus 88, as a special anti-terror unit of the national police, and the National Counterterrorism Agency (NCA). Investigators and intelligence agencies have applied hard policing approaches; the NCA has tried to implement soft approaches, such as deradicalisation and disengagement programs among prisoners, terrorist families and vulnerable groups. 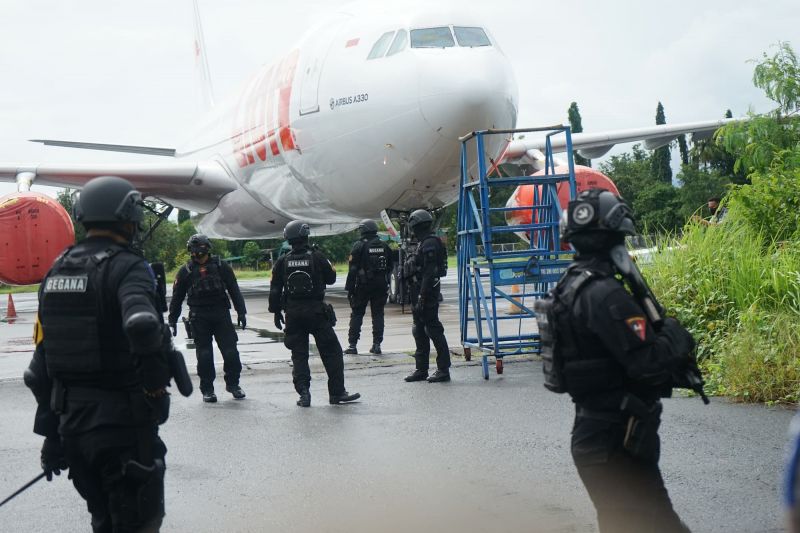 The strengthening of anti-terror law in 2018 marked another important turn in countering terrorism threats and the reassertion of hard approaches. The shock of suicide bombings conducted by mothers with their young children in Surabaya, East Java, in May 2018, and other attacks on the police, motivated parliament to rush through revisions to a 2003 terrorism law. The new Eradication of Criminal Acts of Terrorism Law broadened the definition of terrorist offences, extended periods of detention for suspects, increased powers of surveillance, and specified the role of the military in combatting terrorism. The wider provisions have attracted some criticism on human rights grounds. Although recent arrests and the absence of major terrorist incidents suggest the new provisions have been effective, concerns over the risk of overreach by law enforcement and military units underscores the importance of ensuring soft counterterrorism approaches succeed and remain a vital part of the suite of counter-terrorism measures.

Among these are a variety of initiatives to counter terrorist financing. In 2013, Indonesia enacted a special anti-terrorist financing law. It also is an active member of the Asia Pacific Group on Money Laundering (APG-ML). It is currently pursuing membership of the Financial Action Task Force on Money Laundering (FATF), a 1989 initiative by the G7. Under a strategic partnership to tackle illicit financial flows, Indonesia and Australia have been expanding cooperation to counter terrorist financing through intelligence information exchanges, building regional risk assessments and developing public-private partnerships. In order to strengthen financial oversight and freeze terrorists’ assets, Indonesia also ratified various international instruments intended to block individuals and organisations with terrorist links from engaging in financial transactions.

Cutting terrorists’ access to finance, and soft approaches at the national level, such as rehabilitation, reintegration and re-education for convicted terrorists, need to be seen as medium and long term solutions that require both patience in implementation and a willingness to defer judgment on outcomes. This is the logic behind the release in January 2021 of the government’s National Plan of Action on Countering Violent Extremism that Leads to Terrorism. The document is a comprehensive attempt to combine the various strands of the counter-terrorism effort into an overarching strategy. It offers guidelines to 36 ministries and government agencies, coordinated by the NCA, to improve collaboration in developing prevention, law enforcement, capacity building, monitoring and supervision, and international cooperation on counterterrorism measures.

It is clear such a comprehensive strategic approach is required. While terrorism in Indonesia might be out of the headlines, the country faces growing security and political challenges in how it manages terrorist threats at the national and international levels. Four, in particular, are noteworthy.

First, there has been a burgeoning and regrouping of home-grown terrorism, including JI, JAD, and the remaining networks of Mujahidin Indonesia Timur (MIT). The arrests in connection with the planned 17 August Independence Day attacks point to this current threat. JAD and its pro-IS followers have not exhibited significant activity yet; they are now focusing on developing propaganda, ‘dakwah’ (propagation of teaching), and physical training. But in July last year, a joint police-military operation resulted in a firefight with MIT in which two MIT members were killed. Six prominent members of the group are still being hunted by police.

Secondly, there is the continuing development of international terrorist networks. Territorial losses in Syria and Iraq have prompted IS militants and foreign fighters to move to the southern Philippines and Jammu and Kashmir. This creates another potential haven for Indonesian militants. Aside from keeping a watch on returnees and repatriations, the Indonesian government has to monitor the ‘spillover’ effect of the Taliban takeover of Afghanistan. The Taliban victory is likely to be framed by Indonesian militants as a success story in the battle against Western hegemony.

Fourthly, there is an issue of nonclemature. The current disposition is to list all armed challenges to the state as terrorist. The government refers to the West Papua National Liberation Army (TNPB) and the Free Papua Movement (OPM) as ‘armed criminal groups’ (KBB) and people and organisations affiliated with them as terrorists. The government should be very cautious in the use of these labels to avoid complicating the peace process.

Despite the enormous progress in the implementation of hard and soft counterterrorism measures in the face of those challenges, it is clear a lot of work remains to be done. Adaptation is the key to sustaining success. The combination of effective use of the criminal justice system, deradicalisation programs, and continuous risk and threat monitoring is critical. Some areas are still neglected and require attention. These include better management of convicted terrorists, including reduction in overcrowded prison populations, development of community-based programs, disengagement measures for families of terrorists, and pushback against extremist narratives and propaganda on social media. If recent success is to be sustained in the face of evolving challenges, the Indonesian government will need to remain vigilant and focus on strengthening counterterrorism policies.

Sylvia Laksmi is a former senior research analyst for the Indonesian government’s Financial Intelligence Unit and has conducted research in counterterrorism and radicalism studies. She is currently a PhD candidate at the Strategic and Defence Studies Centre, Australian National University.