Faced with the twin economic challenges of COVID and Chinese trade sanctions, Australia needs to be investing in big ticket infrastructure to enhance competitiveness, writes Ross Muir. One such opportunity is in northern Australia.

It sometimes takes a crisis for a problem to become clear. The coronavirus pandemic and China’s trade aggression, combined with growing strategic competition in our region, help us to see where we stand. We Australians have always been quick on our feet. But to do well now, we must become as fit, efficient and effective a nation as we can be. Being highly competitive is key. In particular, as we emerge from the pandemic and come to terms with a tougher global economic outlook we must think big on the kind of national projects that can reshape our future both strategically and as a great trading nation. Darwin's proximity to Asia puts it at a geographical advantage over Australia's southern cities – it's placement is key to supply chain efficiency.

Building our rail and port capacities will cut those costs. And doing that in our north is crucial. Moving more freight to rail significantly improves freight efficiency, while decreasing waiting times at ports. This is particularly true for northern Australia, where long rail distances with relatively few stops delivers impressive supply chain efficiencies. Northern Australia’s proximity to Asia (and to other markets) gives us a logistical advantage.

In this, Darwin — our most northern city — has a clear geographical advantage. It represents a real opportunity for national economic expansion. It’s our front door to Asia and has a seaport much closer to Jakarta and Singapore — indeed half the distance — than Sydney or Melbourne. The 3,000-kilometre Ghan railway linked Adelaide to Darwin in 2003, permitting freight from the far south to be exported through the Port of Darwin. The Genesee & Wyoming Australia rail company (now majority-owned by Macquarie Bank) is running a thriving business.

In 2015, the Abbott Government released Our North, Our Future: White Paper on Developing Northern Australia. It set out a number of recommendations, including a feasibility study for a railway from Tennant Creek to Mount Isa, which would link Darwin through to Townsville. To its credit the Government continues to refine its approach on Northern Australia. But it should now move faster.

Ensuring supply chain connectivity in northern Australia is not merely an economic question. It is a vital one of national security, given the presence of key defence facilities and other assets in our north. Northern Australia’s importance is not lost on our friends and rivals. Our major ally, the US, our major regional partner Japan, and our major present market, China, all see its strategic value.

If we are genuine about boosting economic growth and strategic partnerships, including with high-potential neighbours such as Indonesia, we must match our words with capable infrastructure.

We need to take three related steps in our north to lift national capacity and resilience.

First, we must build an additional and larger seaport for Darwin because the present Port of Darwin — leased for 99 years by Landbridge (China) — lacks sufficient capacity for growth.

Situated at East Arm in Darwin Harbour the existing port sits between Darwin City and Palmerston. Hemmed in by the nearby LNG gas processing production trains of Inpex (Japan) and Santos (Australia) and associated under-harbour gas pipes and gas tanker ships, Darwin Port is short of space. It will continue to run profitable container traffic but will soon reach its limit to handle bulk ore. Put simply, it is too close to built-up areas. Nor can it comfortably accommodate Capesize ships – the largest dry bulk vessels.

The Northern Territory has long planned for a new port at Glyde Point, 90km northeast of Darwin City. A potential alternative site is Murrumujuk, 60 km northeast. Either of these locations would require a short rail extension. Either would provide a high-volume bulk ore seaport needed to service fast growing northern rail transport logistics. Indeed, the 2015 White Paper found that the Ghan rail to Darwin enabled 13 times larger export volumes through the port in just 10 years. A new port could cost around $7 billion and take at least five years from approval to completion. We need to start now.

Second, it’s time to build the long-proposed railway from Mount Isa to Tennant Creek (MITC) which would connect Queensland with the Ghan line to Darwin. Prioritised in the 2015 White Paper, its 600km of rail would cost around $3bn.

The MITC rail is the next logical step following the Ghan rail’s connection to Darwin in 2003. The connection would enable new mining and agricultural ventures, including potential mining of huge phosphate deposits in the Barkly region. It would also foster tourism links through northwest Queensland.

Crucially the project provides a back door for Queensland’s exports via Darwin’s port. This could take pressure off shipping lanes along the Great Barrier Reef.  It also could provide an additional supply line for the Australian Defence Force to its bases around Darwin. The Government’s technical assessment panel study says of the proposed rail: "…there are no major complexities… risks identified are manageable and there are opportunities to refine the [rail] alignment". 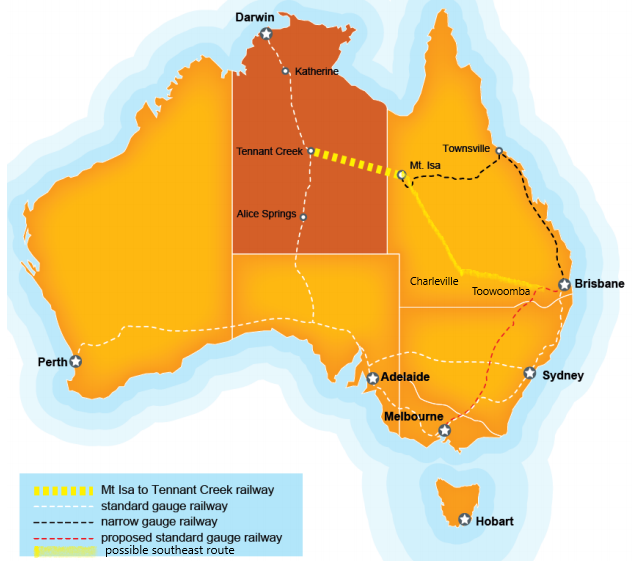 Proposed railway links from Darwin travel through key industry hubs throughout Queensland and down into southern Australia.

Third, we must assess how the rail connection from Darwin to Mount Isa could extend southeast, allowing Darwin to help take the pressure off our southern ports. Such a connection could speed up our exports and imports and lower their unit costs.

A southeast extension of the rail might, for example, run from Mount Isa to Toowoomba via Charleville — utilising some existing rail corridors — connecting with the Inland Rail now under construction from Melbourne to Brisbane. It would ultimately connect Brisbane (and Melbourne) with Darwin. A technical assessment panel should examine route options and make recommendations.

None of the above is to suggest that decisions on key infrastructure are easy. The benefits of new northern infrastructure can be harder to demonstrate because it is often "greenfield" in nature, with no established statistical base to assess future economic returns.

Yet, northern outcomes consistently deliver direct economies of scale — for example, higher utilisation and reduced unit costs for freight — in contrast to the encroached environment of our southern cities where “positive” outcomes are often achieved through a “double-negative” (in which, additional infrastructure is funded to reduce growing logistical constraints).

Catalytic reforms like these are hard won because they ultimately involve a leap of faith. They require vision and judgement in the face of uncertainty – a long-term perspective on national benefit. But we have succeeded before. The floating of the dollar and the start of serious tariff reform in the 1980s are such reforms – fostering bipartisan support and resolve to complete. Those reforms have delivered for decades – and we’re stronger for them, facing down economic crises.

Put simply, we will never have all the facts. Decision is required. In this light, former prime minister John Howard’s decision to support the Alice Springs-Darwin railway — against the advice of government technocrats — was a good call.

In Australia’s present strategic setting we know where we stand. We must now act.

A version of this article was first published by The Weekend Australian on February 13, 2021.