The brutal military crackdown in Myanmar has echoes of the past. Andrew Selth, a long time watcher of the country’s affairs, argues that should temper our optimism – the lesson of history is that the generals will be hard to dislodge and the international community has limited options to remove them.

The American writer Mark Twain once wrote that history does not repeat itself, but it often rhymes. Sadly, this seems to be occurring in Myanmar, where developments following the 1 February coup bear a strong similarity to the events of 1988, when an earlier nation-wide pro-democracy uprising was crushed by the country’s armed forces or Tatmadaw.

Just to recap, in August 1988 a popular movement challenged the government of General Ne Win, which had been in power, in one form or another, since a military coup in 1962. All over Burma (as Myanmar was then known) people from all walks of life came out on the streets to protest against the regime’s brutality and incompetence. As violence escalated on both sides, the opposition movement appealed to the international community for support.

By the end of a major crackdown in September, an estimated 3,000 people had been killed. Thousands more were detained and many were tortured. This resulted in a flood of refugees over Myanmar’s borders. Some joined existing ethnic armed groups (EAG) or formed guerrilla bands of their own. In 1990, the ruling military council ignored the results of a general election, which was resoundingly won by the opposition National League for Democracy. A government-in-exile was formed, but it failed to win international recognition.

From relative obscurity before 1988, Myanmar became a frequent topic in the news media, and a global movement against military rule there gained wide support. A range of punitive measures were introduced by governments, international organisations and activist groups, aimed at removing the regime, or at least forcing greater observance of democratic principles and human rights. A special effort was made to secure the release of opposition leader Aung San Suu Kyi, who spent almost 15 years under house arrest.

As history has shown, however, none of these measures were very effective. The generals displayed remarkable resilience. They were also able to find allies to help them survive. Indeed, when it permitted a quasi-democratic government to be formed in 2011, the military regime was stronger than at any time since the 1962 coup. Despite the claims of some activist groups, its decision to relax internal controls, release Aung San Suu Kyi and share power with an elected administration was made from a position of strength, not weakness.

There are of course differences between Burma in 1988 and Myanmar in 2021, and there are still key aspects of the 1 February coup that remain unknown. However, in many ways history now seems to be repeating itself.

The latest protests enjoy wide support, both inside and outside Myanmar. The obvious justice of the opposition cause and the brutality of the new military junta have aroused strong feelings around the world. Numerous appeals have been made to the UN and international organisations like ASEAN to respond, the Responsibility to Protect doctrine has been invoked by the demonstrators, and democratic governments face strong pressures from their constituents to take decisive action. 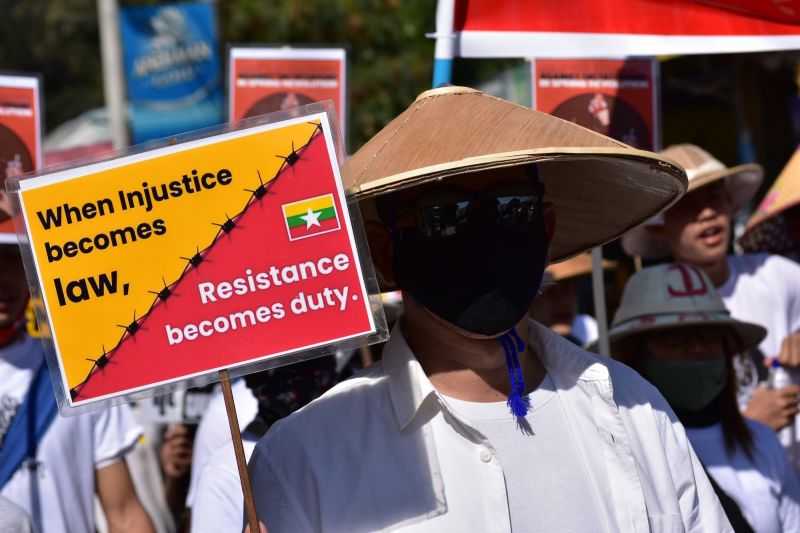 Broadly speaking, Myanmar’s security forces have followed their 1988 play book. Initially, they tried to break up street demonstrations using non-lethal means, but within a few weeks they had begun shooting protesters (and others), detaining opposition figures and threatening civil servants. They have also refused to respond to the pleas and criticisms of the international community. An interim National Unity Government (NUG), formed on 19 April by several groups opposed to the junta, has been branded a terrorist organisation.

All these developments have prompted a spate of articles, op-eds and other commentaries in the international news media and online. Many of these works have described the courage and commitment of those on the streets, the human rights abuses of the security forces and the rising death toll. They have warned that Myanmar is in danger of becoming a failed state. There have also been a number of publications, however, that seem to rely more on rumours, speculation and unsourced optimism about the future than on hard facts or objective analysis.

For example, there have been claims that elements of the armed forces will mutiny, or that the police and Tatmadaw will turn on each other. At least one observer has predicted that Defence Services Commander-in-Chief Min Aung Hlaing will soon be replaced by a military ‘soft-liner’. There have been suggestions too that the NUG will attract formal recognition, if not practical support, from foreign governments. Another idea being floated is that the armed forces will be unable to withstand a ‘federal army’ made up mainly of EAGs on the country’s periphery that have long been fighting civil wars against the central government.

There are doubtless a great many people, both inside and outside Myanmar, who hope that such claims are justified, and that these predictions will come true. However, the harsh fact of the matter is that most if not all of these prognostications are based on little or no evidence and, in many cases, misread the current situation. Indeed, if the history of Myanmar teaches us anything, it is to be very wary of under-estimating the determination and staying power of the generals, and of over-estimating the influence of the international community.

There have already been a number of ‘desertions’ by members of the police force, and even a few soldiers have crossed the barricades. However, there are currently no credible signs that a major split in the security forces is in the offing. Nor is there any evidence to support claims that Senior General Min Aung Hlaing’s standing among the Tatmadaw’s senior officer corps is weakening, let alone that he will soon be replaced by a more moderate figure prepared to negotiate an outcome acceptable to the opposition movement. 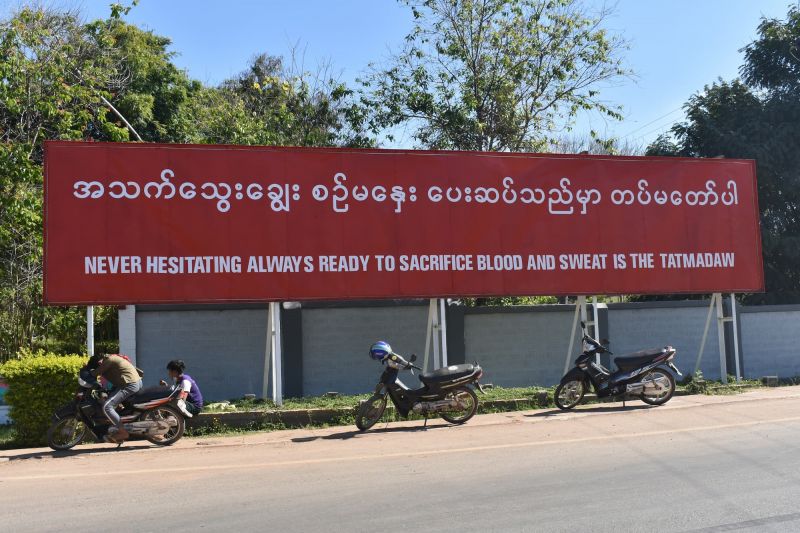 The idea of a ‘federal army’ also needs to be considered carefully. There have been alliances between various EAGs in the past, against their common enemy the Tatmadaw, but they have never lasted very long. Questions have always arisen over issues to do with trust, leadership, and strategic priorities. Such matters are also likely to trouble any new arrangement. In any case, while coordinated operations between EAGs in different parts of the country would stretch the Tatmadaw’s resources, such groups could not overthrow the central government.

As for the international community, it could once again take a range of measures in response to popular demands for action, but it must be acknowledged that in the past they have had little practical effect. Over the years, the generals have proven to be highly resistant to external pressures, and they have repeatedly demonstrated that they are prepared to pay a very high price (usually exacted through the long-suffering civilian population) to protect what they view as Myanmar’s stability, sovereignty and independence.

Bear in mind too that the international community has always been divided in its approach to Myanmar’s many challenges. The new military regime can rely on China and Russia to protect it in the UN Security Council and help it evade sanctions, as occurred after 1988. ASEAN, Japan and the Republic of Korea also oppose sanctions, both as a matter of principle and out of self-interest. The steps taken by the Western democracies are important for the diplomatic signals they send, but unless they are widely supported they will not make much difference.

In any case, history has shown that fundamental changes in Myanmar will be the result of its complex internal dynamics, not outside influences. Only the people of Myanmar can change Myanmar, and under current circumstances that is going to be very difficult. Also, no country wants to intervene directly in its internal affairs, as this would raise all sorts of international legal and political complications. It would also be bitterly resisted by the Tatmadaw. For the same reasons, the NUG is unlikely to attract formal recognition from any countries.

As many commentators have pointed out, Myanmar is not the same as it was 33 years ago, and the generation of protesters now in the streets has grown up in quite a different political, economic and social environment than their parents and grandparents. They are familiar with the internet and social media platforms, and have a greater awareness of the freedoms enjoyed in other countries. In last November’s election, they emphatically chose their own leader and want to see that result honoured. The international environment has also changed.

These changes have been felt within the security forces, but the fact remains that the Tatmadaw is still the most powerful institution in the country. The quasi-democracy introduced in 2011 was in accord with a constitution written to protect the armed forces and perpetuate their control over critical national functions. As long as the rank and file remain loyal and cohesive, and discipline is maintained, it is difficult to see the junta being defeated, either by demonstrators in the streets or guerrilla groups scattered around the countryside.

For many people, all this will make dispiriting reading. It suggests that, if history is any guide, the current protests in Myanmar are likely to fail in the face of the stronger and more ruthless security forces. The formation of an interim unity government and efforts to create a federal army also seem unlikely to enjoy success, at least over the longer term. Appeals for international support may result in various symbolic gestures, but few seem likely to have a significant impact on the thinking of the generals, or the situation on the ground in Myanmar.

Then again, Myanmar has always had the ability to surprise, and even long-time observers have sometimes failed to read the tea leaves correctly. Perhaps this was what Mark Twain meant when he said that history does not repeat itself, it only appears that way.