The relationship between Australia and South Korea is perennially undervalued, writes former ambassador Bill Paterson. But, he argues, it is economic imperatives rather than geopolitical challenges that might end up driving the two countries together.

Australia and Korea, on the face of it, are important to each other and share much in common. They both are developed democracies in the Indo-Pacific region, and reliant upon its stability for their security and prosperity. They are like-minded middle powers, United States allies, challenged by the rise of China, big trading and investment partners linked by a Free Trade Agreement (FTA), fellow participants in the Korean War, and potentially useful contemporary defence partners. But the relationship seems perennially underdone. Facing changed and uncertain strategic circumstances, both countries need friends and regional partners more than ever, so what is to be done?

There is little serious and sustained attention to this relationship inside or outside government – in both countries. Hence the assertion of one commentator recently that Australia is not actually recognised as a “significant or serious partner” by the majority of South Korea’s foreign policy and political elite – to which I would add Korea’s defence establishment, myopically focussed on its alliance with the US.

It has been suggested that the problems essentially derive from negligence on the Australian side – but Seoul is an intensely competitive place, with claims by many countries for Korea’s attention. And Korea, in part due to its history and geography, sees itself playing with the ‘big end of town’ – the US, China, Japan and Russia. The Moon Jae-in administration’s ‘New Southern Policy’ is not about taking a fresh look at Australia, or a new framework for foreign policy, but about building and diversifying export markets across ASEAN. 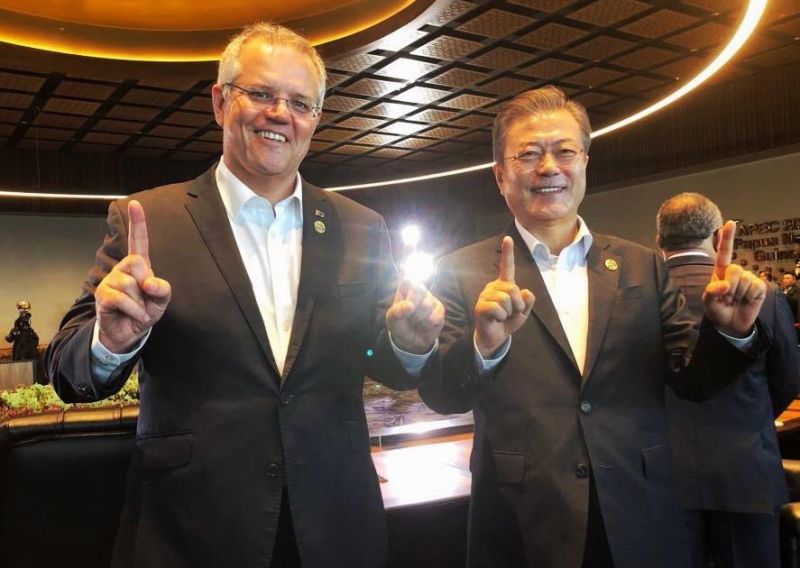 In Korea’s divided politics, this has largely overtaken the ‘middle power diplomacy’ associated with the previous administration of Park Geun-hye, which produced few tangible benefits (and Korea is all about tangible benefits). Still, the middle power group of MIKTA (Mexico, Indonesia, Korea, Turkey and Australia) served a purpose for a time in thickening dialogue, if not substance. Turkey’s policies since have, perhaps inevitably, fractured opportunities for a unified MIKTA voice.

Trade and investment in both directions are well-established and largely trouble-free, so do not garner attention. Proposals for Korean investment in Australia fly through the Foreign Investment Review Board, while Macquarie Group is the largest foreign asset manager in Korea. But good news stories don’t attract attention, particularly when it’s more compelling and immediate for the media to focus on North Korea’s often bizarre tactics and belligerence.

Given the difficulties in cutting through, what is the proper role for our diplomats in Seoul and what can they hope to achieve? Reporting to the Australian government on Korea, and sharing much of that with business, has more than usual value because of the dearth of media and other reporting on South Korea in Australia – but it’s focussed analysis, not reporting, that matters. Diplomats are not simply journalists, but use the networks they build and the privileged access they receive to delve deep into those areas important to Australia, and which have current relevance for policymakers. Alerting and evaluating the potentially large strategic changes will naturally form an important part of assessing future trajectories and implications for Australia. But there is more to do than simply report and analyse. My mentors in the Department of Foreign Affairs and Trade argued to me that the job was about building influence, and using that as a platform for advocacy in pursuit of desired outcomes.

In my time in Seoul, that included, for instance, persuading the South Korean parliament, the National Assembly, of the importance of early conclusion of the Korea-Australia FTA (KAFTA), persuading a largely unreceptive defence establishment of concrete steps to give more substance to our defence relationship, and pressing for accelerated evaluation of new agricultural products to enable entry into the market. We argued with the foreign policy establishment that an affluent and increasingly powerful South Korea could play a more active role in the Indo-Pacific, where most of its exports and energy and resource imports transit. Sitting on the fence does not secure Korea’s interests in maintaining a stable maritime domain.

Against this background, it’s hard to get the attention of ministers on both sides, or regular high-level visits. Despite all the talk about trade, shared values and outlooks, Australian governments never have given substance to these claims through the sorts of sustained efforts put into our relations with China, Japan or Indonesia. Korea regularly appears in lists of Australia’s priority countries, but a serious effort to give this substance has never been made. Korea, too, hasn’t put much effort into the relationship and has long had trouble getting Australian attention. It is largely K-pop and K-drama, cosmetics and food, that have begun, fitfully, to raise Korea’s profile, although Australian consumers have long embraced Hyundai, LG and Samsung. For Korean governments, that may be considered enough. K-pop acts such as BTS (pictured) have raised Korea's profile, beyond long-embraced tech and car manufacturers such as Samsung and Hyundai, in the minds of Australian consumers. Image credit: Silvia Elizabeth Pangaro, Shutterstock.

But it is not a ‘fake’ exercise to talk up the relationship. Our rhetoric is directed at Australians, and Australian business, as much as it is at Koreans. There’s a massive lack of knowledge about South Korea in Australia, and promotion of the relationship usefully draws attention to the importance and potential of the market, surely important as we seek to diversify away from our dependence on China.

It is true that we have little profile, but government-funded activities like the Australia-Korea Foundation (AKF) and the Australian Embassy’s own active public diplomacy program help. The private sector Australia-Korea Business Council (AKBC), growing in size, also runs programs and undertakes consultancies to assist business in developing a deep understanding of the market.

So, what to do? Unfortunately, few additional resources are likely to be channelled into traditional diplomatic instruments. Others have documented how seriously under-represented official Australia is across the globe. But for Korea we have several advantages: we are a stable and open society, with sound financial and regulatory structures. Investment in Australia is safe. We are seen to have managed COVID-19 well (as, by and large, Korea has). We are a good market for Korea’s products. Korea has just secured its first big defence contract in Australia, which will likely help thicken the defence relationship – and as The Economist recently noted, ‘South Korea finds itself in an increasingly alarming geopolitical environment’, recalling the painful economic boycott China imposed on it in 2017. Unsettled by the Trump presidency and its difficult relationship with Japan, Korea needs friends.

As Korea ambitiously transitions to a hydrogen economy, it’s looking to Australia as the principal source of ‘green’ hydrogen which, when Australia overcomes remaining technical challenges, will mean we remain its principal source of imported energy into the future. Our financial institutions attract positive Korean regulatory attention and funds from Korea’s massive pension funds, while Korea’s rapidly ageing (and shrinking) population, together with its rapidly developing medical technology, mean Australia’s health systems and medical research increasingly attract Korean attention.

Our universities are growing in attractiveness to Korean students, as they fare well in world rankings. In a post-pandemic world, they may look safer than the US and UK. That’s a big potential plus. Although intensely career-focussed Koreans are unsentimental about their alumni institutions, their largely positive experiences in Australia will serve us well long-term.

It is easy to be a bit pessimistic about progress and development of what should be a self-evidently important relationship, but in the end economics if not geopolitics may be more significant than government policies in thickening our ties. And that, finally, will capture political attention, even if significant opportunities will have been missed along the way. Responsibility for that lies at both ends of the relationship.

Bill Paterson PSM was Australian Ambassador to the Republic of Korea and North Korea from 2013 to 2016. He is a Senior Fellow at ASPI and a member of the executive of the Australia-Korea Business Council.