As the strategic picture in Myanmar shows signs of changing with a better organised, better armed and more proficient resistance, Andrew Selth asks, could foreign governments consider some fresh options against the coup leaders?

Over the past year, governments and international organisations have imposed sanctions against Myanmar’s military regime and taken various other steps to support the country’s embattled opposition movement. Most of these measures have been largely symbolic, however, and none have had a direct impact on the balance of forces inside the country. The junta has continued its repressive policies, in what has become a nationwide civil war.

Requests by the shadow National Unity Government (NUG) for direct military intervention, under the UN’s Responsibility to Protect principles, have fallen on deaf ears. More recent calls by members of the People’s Defence Force (PDF), for the imposition of a no-fly zone over Myanmar, have been equally unsuccessful. Expatriate groups and private donors have provided a trickle of funds and weapons, but to date no lethal aid has been forthcoming.

Despite intensive lobbying in the US and elsewhere, the NUG has been unable to persuade any foreign government to recognise its credentials, or to assist the armed groups fighting the junta in its name. This lack of official response seems to reflect a combination of international conventions, geostrategic circumstances and perceived national interests.

One argument heard is that governments usually recognise states, not other governments, so the question of formally disavowing the military regime and acknowledging the NUG does not arise. After all, Myanmar already exists. This approach permits governments to avoid taking any positions that might harm their tenuous communications links with the junta, upset China or complicate relations with international organisations like ASEAN.

Although rarely articulated, governments also appear unwilling to support the NUG on the grounds that it is largely self-appointed and does not represent the entire country. Its diverse membership is fractious and plagued by distrust. More to the point, perhaps, the NUG does not control any territory in its own right, and cannot implement any of its announced policies. Not all the 250-plus self-defence militias and urban resistance cells follow the NUG’s orders.

While most of these groups claim to be part of the PDF, many act independently. Few of them appear to observe the NUG’s carefully crafted code of military conduct. Indeed, the use of terrorist-style tactics by many urban resistance cells is probably another reason why the international community is reluctant openly to support them. The ethnic armed organisations that support the opposition movement are essentially a law unto themselves.

Over and above any concerns foreign governments may have about the opposition movement itself, most appear to have calculated that Myanmar’s armed forces (or Tatmadaw) cannot be defeated by force of arms, and that the junta will eventually wear down its opponents. This happened after the 1988 uprising, when the exiled National Coalition Government of the Union of Burma and the armed All Burma Student Democratic Front gradually faded away. 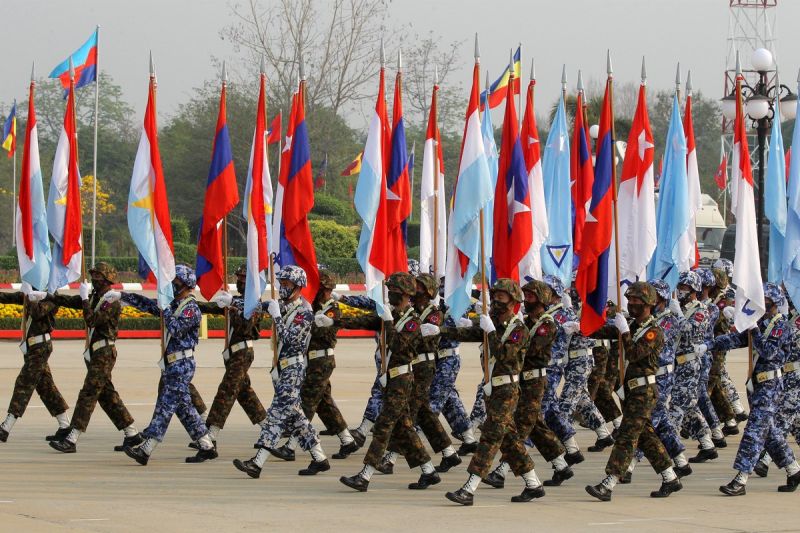 On the basis of such assessments, most foreign governments seem to have adopted a policy of criticising the junta, and expressing broad support for the opposition movement, while awaiting the outcome of the current military and political stalemate. They have doubtless also taken into account the generals’ historical resistance to external pressures and the international community’s past failures to influence developments inside Myanmar.

In these circumstances, it is little wonder that the NUG has accused the international community of just “sitting and watching” as Myanmar slides deeper into civil war. Its supporters argue that governments have failed to take into account the profound differences between 1988 and 2021. This time, they say, the junta is opposed, either actively or passively, by the vast majority of the civilian population. To them, it is a revolution, not a revolt.

In recent weeks, the activist community has also referred to the arms and materiel flowing to Ukraine from the Western democracies to ask why similar support cannot be given to Myanmar’s opposition movement. There are obvious differences between the invasion of a sovereign state in Europe by a nuclear-armed superpower, and the overthrow of a quasi-civilian government in Asia by its own armed forces. However, that does not lessen the feeling that, once again, Myanmar is being discriminated against.

All that said, there has been some movement of late. Last year, most experienced Myanmar-watchers predicted that, despite the undoubted commitment of their members, the disorganised, poorly trained and ill-armed resistance forces would not prevail against the country’s security forces. There was an unprecedented number of ‘defections’, but the junta’s coercive apparatus still constituted a formidable adversary. If the Tatmadaw remained loyal and cohesive, it was hard to see the generals being overthrown.

However, the strategic picture may be changing. The resistance seems to have become better organised, better armed and more proficient. It still suffers from major shortfalls in arms, equipment and expertise, but some respected Myanmar-watchers are now suggesting that the Tatmadaw is on the defensive. One analyst has suggested that the provision of arms to the PDF would “fundamentally alter the trajectory of events in Myanmar”.

The chances of foreign governments openly recognising the NUG and sending weapons to the PDF remain slim. However, it is possible that other options might be explored, such as the provision of lethal aid secretly through non-state intermediaries. Man-portable surface-to-air missiles like those provided to the Afghan mujahideen, and light anti-tank weapons like those given to Ukraine, are seen by some commentators as potential game-changers.

If adopted, this would be a high-risk strategy. Such assistance would soon become known to the junta, which would take decisive action against any country suspected of being involved, probably including the expulsion of its diplomatic mission from Myanmar. Also, any arms shipments would be opposed by Russia and China, both supporters of the junta. In response, they would almost certainly increase their lethal aid to the Tatmadaw.

Another option being canvassed by observers is for the Western democracies to provide greater humanitarian aid to the pro-democracy forces. The NUG could then redirect its scarce resources to buying more arms for the PDF. Such a policy would carry its own risks, but it would arguably keep foreign governments at arm’s length from the actual conflict while nurturing relations with the opposition and helping those most in need of assistance.

At one level, the case for helping Myanmar’s opposition forces is clear and persuasive. Also, governments and international organisations are frustrated with the junta’s intransigence. However, conscious of the wider ramifications of direct involvement, they remain reluctant to recognise the NUG or provide it with lethal aid. They also appear concerned that to do so would prolong the civil war and increase the number of casualties, without a decisive result.

In part because of such problems, some analysts have suggested that the crisis in Myanmar cannot be resolved by military means, only through a negotiated settlement. At present, however, neither the NUG nor the junta have any appetite for discussions, as the UN Special Envoy found to her cost when she floated the idea last month. Both sides have firmly set their sights on a military victory, with all the tragic consequences that will inevitably entail.

Andrew Selth is an Adjunct Professor at the Griffith Asia Institute, Griffith University, in Brisbane. His latest book is Myanmar (Burma) Since the 1988 Uprising: A Select Bibliography (4th edition) (Singapore: ISEAS Publishing, 2022).